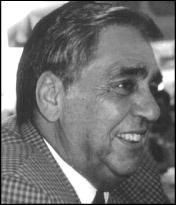 FUNERAL HOME
Doolittle Funeral Home
14 Old Church Street
Middletown, CT
MAYO, Herbert G. Herbert Greenleaf Mayo, 82, of Haddam, husband of the late Madelyn (Luce) Mayo, passed away on Tuesday, (November 23) at Middlesex Hospital. Born in Lewiston, ME, he was the son of the late Dwight and Marion (Griffith) Mayo. Herbert grew up in Lewiston, ME and moved to CT in 1957 where he was Boys Work Secretary at the New Britain YMCA for eight years accomplishing an expanded outdoor facility. In 1965, he became Director of Northern Middlesex YMCA working for twenty-six years retiring in 1991. Within in these twenty-six years, Herbert pioneered programs for women and incorporated the first woman on the Board of Directors, opened shelters for teens, instituted the first state funded daycare, opened a halfway house for former CVH patients, started other innovative programs, NYPUM, enlarged Ingersoll Day Camp to serve over two hundred youths, and updated present YMCA facilities through a multi-million dollar expansion. He was also a member of T.O.P.S., member and past president of Middletown Exchange Club (first service club to accept women), served on City of Middletown Recreation Committee, the CDAP, cooperator of Middlesex Hospital and Liberty Bank, member and former president of CAGM, member of RSVP and a consultant to Middlesex Community Technical College. Herbert was a member of First Church of Christ of Middletown, enjoyed golfing, Bridge, following the Red Sox and his love of family. He is survived by his son, Theodore D. Mayo and his wife, Nancy of Waterbury; his daughter, Rebecca M. Cubeta and her husband, Christopher of Haddam; four grandchildren, Jessie Mayo, Austin Mayo, Corey Cubeta, and Adam Cubeta; one great grandchild, Richard A. Castaldi; and two sisters, Virgilyn McCann of CA and Louise Griffin of ME. A memorial service will be held on Friday, (May 6) at 4 p.m. at YMCA Camp Ingersoll, Route 66, Portland and burial will be at the convenience of the family. There will be no calling hours and in lieu of flowers, friends may make donations in Herbert's memory to the Northern Middlesex YMCA, 99 Union Street, Middletown, CT 06457. Messages of condolence may be sent to the family at www.doolittlefuneralservice.com. The Doolittle Funeral Home, 14 Old Church Street, Middletown is handling the arrangements.
To plant trees in memory, please visit our Sympathy Store.
Published by Hartford Courant on Nov. 28, 2010.
MEMORIAL EVENTS
No memorial events are currently scheduled.
To offer your sympathy during this difficult time, you can now have memorial trees planted in a National Forest in memory of your loved one.
Funeral services provided by:
Doolittle Funeral Home
MAKE A DONATION
MEMORIES & CONDOLENCES
5 Entries
Becky, Ted and all the family-we admired your Dad for being-a real humanitarian, putting concern for people first and foremost while providing leadership to the movers and shakers in our community to help get the right things done, the right way. He set an example as a good friend, and we loved him too. Helen and Irwin Sitkin
December 1, 2010
Ted and Becky - I was so sorry to hear of your dad's passing. He was such a special person. Always there to help if you needed advice on anything you had trouble dealing with. He was so caring and such a giving person. I feel so sorry for you and your families. He cannot be replaced.

Dorothy & Joseph Branciforte
November 29, 2010
Becky and Teddy...
Helen Keller wrote, "What we once enjoyed and deeply loved we can never lose, for all that we love deeply becomes a part of us."

Your Dad was a very kind man...you are very lucky to have had such a man in your life.
Kathy McPherson
November 29, 2010
Well done, good and faithful servant. Rest in peace. You will be greatly missed.
November 28, 2010
Teddy- I was surprised to read of your Dad's passing also. My father was healthy up until the last couple of weeks. Your are probably right about Ev Johnson. As you know I do remember those 'early days' at the New Britain Y.
Ruthe Boiczyk
November 28, 2010
Showing 1 - 5 of 5 results