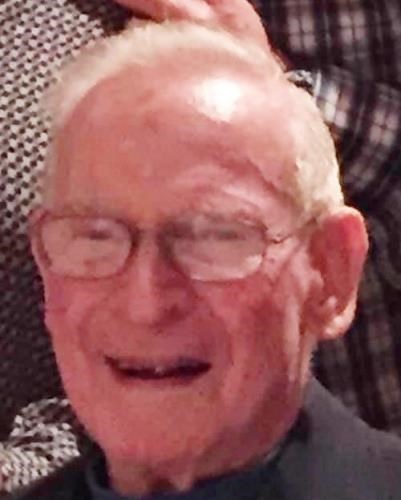 BORN
1924
DIED
2021
FUNERAL HOME
Carmon Community Funeral Homes
301 Country Club Road
Avon, CT
UPCOMING SERVICE
Memorial service
Jul, 24 2021
2:00p.m.
Carmon Community Funeral Homes
Send Flowers
Joseph "Joe" Lambert Carey, Jr., 97, of Weatogue, CT, beloved husband of Joan (Jenkins) Carey passed away peacefully on June 18, 2021. Born in Laurel, DE on February 23, 1924, the son of the late Joseph and Martha (Chipman) Carey. Joe, at the age of 19, enlisted in the United States Navy in the V5 Pilot training program where he graduated as a naval pilot. While receiving additional training at Columbia, Joe and Joan met where they fell madly in love and dated for roughly three weeks prior to joining in wedlock at the Little Church Around the Corner in NYC. Joe was deployed for combat in WWII to Guam shortly after their wedding. Joe and Joan celebrated their 75th wedding anniversary last year. Throughout his entire life, he never lost his love for flight, speed and Joan. Joe was an efficiency expert for ITT in New York for over 30 years which provided him the opportunity to travel all over the world. Joe became an avid skier at the age of 40. He and Joan would spend the rest of their lives skiing with their family and friends, enjoying their ski house on Round Top Mountain in Plymouth, VT. They took many trips to different countries and various altitudes with friends who shared their passion for skiing. Joe was known for regularly being the first one down the mountain when the slopes opened in the morning and he skied right up until last year at the age of 96. His love for the sport was showcased each time he became a medalist in the Senior Winter Olympic Games, winning gold 7 times. Joe is survived by his wife Joan Carey of Weatogue, CT; his two daughters, Carol Abrams and her husband Phil of Northport, NY; Cathy Bulkley and her husband Gary of Pasadena, MD; and his son Jeff Carey of Avon, CT; along with his grandchildren, David and Daniel Abrams, Matthew and Corry Bulkley, and Jason Carey. Joan and Joe have 4 beloved great grandchildren. Joe was predeceased by his parents, and sister, Jane Gibbs. A memorial service will be held on Saturday, July 24, 2021 at 2pm ET at Carmon Funeral Home & Family Center, 301 Country Club Road, Avon, CT 06001. In lieu of flowers, donations in Joe's memory may be made to your favorite charity. For condolences, please visit www.carmonfuneralhome.com.
To plant trees in memory, please visit our Sympathy Store.
Published by Hartford Courant on Jun. 23, 2021.
MEMORIAL EVENTS
Jul
24
Memorial service
2:00p.m.
Carmon Community Funeral Homes
301 Country Club Road Route 83, Avon, CT
Funeral services provided by:
Carmon Community Funeral Homes
MAKE A DONATION
Please consider a donation as requested by the family.
MEMORIES & CONDOLENCES
Sponsored by the family.
3 Entries
I met Joe at Ski Sundown several years ago and had the pleasure of skiing - always behind him. He was truly an inspiration to me both on and off the slopes with his warm smile , modest demeanor and impressive accomplishments. I will miss him.
Thomas Shea
Friend
June 29, 2021
Joan and family, I am so sorry to hear of Joe’s passing. Whenever I was around Joe he was always smiling and enjoying the company of those he was with. I was in awe of his skiing abilities and not surprised that he had the nickname “Rocket”! I’m hoping he’s been reunited with Gil A and the two of them are enjoying racing side by side down a heavenly mountain!
Kim Wishart
Friend
June 23, 2021
Joe was always an inspiration. His joy and charisma brought a smile to all who were fortunate to spend time with him. He will be greatly missed
By family and friends. Godspeed on your new adventure Joe!
Ileana Maza
Friend
June 22, 2021
Showing 1 - 3 of 3 results