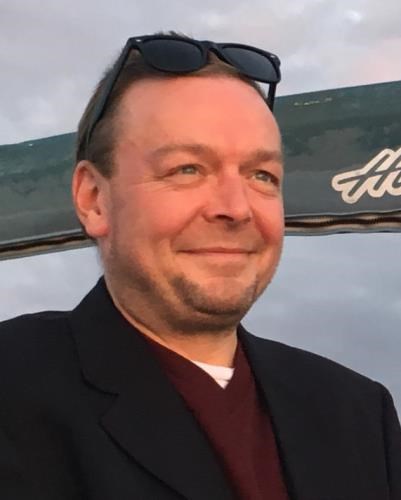 BORN
1973
DIED
2021
Justin Thomas Anderson, 47, of Charlestown, RI and formerly West Hartford, CT, peacefully assumed Executive Chef duties behind the eternal line on August 25, 2021. Born September 2, 1973, in Hartford, CT, he was a lifelong Whaler's fan and beloved first son of Arthur and Barbara Anderson. In his youth, he felt no sympathy for Goldie Locks' disregard for personal space and, according to his Mom, demonstrated early signs of culinary acumen by referring to chicken wings as "chicken-on-the-cob." Justin was forevermore drowned out by the arrival of his siblings, loquacious, fiercely loyal brother Matthew, equally voluble and often long-winded, sister Laura (McGrath), and watched over by his kindred spirit youngest brother, Thomas. Raised in West Hartford, Justin was a '92 graduate of Conard High School, where with a group of masterful misfits he forged unbreakable bonds, whose antics tried the patience of parents and brake calipers. A self-taught musician, predominantly 12-string guitar, piano, and spoons, he won the talent show with his dear friend and accomplice Jimmy, for their rendition of Sam Cooke's, 'Bring It on Home to Me.' Justin was also a featured member of his Dad's garage band, Duke and the Esoterics, with an inspired cover of Neil Young's, 'Keep on Rockin' in the Free World.' He spent his summers in Quonochontaug, RI, getting into good trouble with lasting friends, and where he would eventually call home despite detesting sand. Justin briefly considered minoring in experimental off-roading with roommate Andy, at Franklin Pierce University, New Hampshire before answering his culinary calling. He attended Johnson and Wales in Providence, RI as he honed his technique and creativity at various established restaurants before working up the line at W.B. Cody's in Westerly, RI. Over many summers, and to his chagrin, he worked alongside all three of his younger siblings and jovial friends who dared only once to snag a free sample. After 15 years of succulent BBQ and a cast of treasured Cody's characters, including his best friend Chad, Justin enjoyed his remaining years at the Breachway Grill in Charlestown, RI. A gifted Executive Chef, throughout his career Justin was known for his tireless dedication, diligence, and intrepidness. Over the years, he refined his signature dishes of Chicken Scarpello, Fish Tacos, Sweet Chili Pasta, and Braised Short Ribs, while constantly pushing himself and the limits of expletives, on one occasion perfecting a tricky flan recipe for a Breachway Wine Night Dinner. A compassionate mentor and peer, he was quick with a knowing smirk to a harried colleague. His Breachway family holds fond memories of the annual Christmas after-party hosted at his home, as Justin's door remained open to anyone with an affinity for classic vinyl, maracas or the Miami Dolphins. Justin's legacy is in lives touched by his gentle, unassuming presence, genuine concern for others, perceptive humor, warm cackle, and as a three-time Whiffle Cup Champion. A faithful friend, he was willing to help others without judgement, unless asked to share his spareribs before the requisite four hours in the oven. He loathed being the center of attention, yet he looms large in memories as the person everyone wanted to sit next to, be it at his house indefatigably rooting for the Sox, impromptu singalongs at the Cove, a rare bonfire appearance, watching the Dolphin's beat the Patriots with a miracle hook and ladder at his brother Matt's, the holiday dinner table after supervising his sister's cooking, on Chad's boat leisurely cruising Ninigret pond, or pridefully watching his brother Tommy pluck his bass with the Stella Blue's Band at Garcia's in Portchester, NY. He cherished being an uncle, doting on his nieces and nephew, teaching them the art of the 'fake sleep' when chores were being assigned or parental figures neared. He is predeceased by his best dog pal, Cody and is survived by countless friends far and near, extended family including loving Aunts, Uncles and cousins, his parents, three siblings, his adoring out-laws that thought of Justin as their own, Kara Anderson and Michael McGrath, nieces Ava Anderson (7) and Lucille McGrath (7 months), nephew and Godson, Matthew McGrath (6) and his cat, Papi (14). Rest easy Tin Tin. We carry part of you with us so our love and your memory will prevail. "Ah, but I was so much older then, I'm younger than that now." – Bob Dylan. The family will hold a virtual service in the coming weeks, and an in-person celebration of his life in Rhode Island in the fall. In lieu of flowers, donations can be made in Justin's memory to the Autism Families of Connecticut or the Westerly Animal Shelter Wellness Clinic.

Published by Hartford Courant from Sep. 3 to Sep. 4, 2021.
To plant trees in memory, please visit the Sympathy Store.
MEMORIAL EVENTS
To offer your sympathy during this difficult time, you can now have memorial trees planted in a National Forest in memory of your loved one.
MAKE A DONATION
MEMORIES & CONDOLENCES
Sponsored by the family.
17 Entries
My heart goes out to Art, Barbara, and family on the loss of their gifted, talented, and caring son... while I didn´t know Justin, I have many fond memories of his parents long ago... the tributes to Justin reflect the very best of what I remember. Blessings!
Bob Beggs
Family
September 30, 2021
I didn´t know Justin but I´m friends with his friend Chad who told me all about Justin and all the great times they had together. I know Chad´s heart is broken as I´m sure all your hearts are broken as well. I´m so very sorry for your loss, it was a beautiful life taken too soon. R.I.P. JTA
MaryAnn Bouchard
September 26, 2021
I came to W-Hartford as an exchange student from Belgium in 91-92 and hat the chance to meet Justin during that schoolyear. I have only good memories of him. Such a nice and funny person!! My condolences to the family.
Gregory Kaiser
School
September 6, 2021
I did not know Justin very well, but the few times I was in his company he sure did make me feel as he knew me more than he did. He was warm and did like to have a good time. He made you laugh for sure. It's never easy to say goodbye,especially when you're not prepared, but I know all who knew him well will never forget him and will always be in your hearts. He most definitely left you all with quite an array of memories. Mat he Test In Peace and I wish for his family to find Peace also as time goes on. There never are any words to make the heartache to away, but I wish you all well as you start to heal. God Bless.
Nancy LePore
September 4, 2021
Arthur and family, My most sincere condolences on the passing of Justin. Words don't do the job. My prayers are with you. Marty Hennessey
Marty Hennessey
September 4, 2021
Wow, didn´t know Justin, wish I did! He certainly had a full adventure! A wonderfully written tribute I read it twice! I believe I´d know him even after never having met! I know the sadness you are feeling today shared by many. I truly hope that with all the laughing, moments of character remembered that your sadness will diminish a bit and hearts will calm as you prepare for a reunion with Justin someday! My respect and sadness goes out to each of you this morning! I believe a wonderful song by Bob Dillion , FOREVER YOUNG , song by Joan Baez would be most appropriate for many reasons! Peace and love from East Hartford .
Paul Pellegatto
Other
September 4, 2021
Matt, Kara, Ava and Family. I am so sorry for your loss. Had had the chance to hangout with Justin a bit when he came to visit Matt at college and I have fond memories of such a nice, cool guy he was. I will keep your family in my prayers and hope you can find some comfort during this difficult time.
Matt Walsh
Friend
September 3, 2021
Even though our Brainard/ Levine memories of the Anderson posse has a "long ago" caption attached, how could we ever forget any of you. I´ve been remembering all the plain old fun times when we were young and joy was in each and every day. Speaking for my crew I cannot, even as a wordsmith, come up with words to describe the profound sadness that comes with the news of Justin´s death. It is simply too much. Sending all kinds of love to you.
Sue Levine
September 3, 2021
My childhood memories are interwoven with the neighborhood kids - the white blond hair of the Anderson boys, Justin was quick - on the move, funny, sharp witted. Never a tough guy but lots of fun to be around. Those memories are blurry, a lot of time has passed, but he remains part of my story and the fondness for those times in our lives will always include him. I´m so sorry for your pain and heartache at losing him. I´ve loved reading the beautiful posts from those who have known him throughout his life. He will be so deeply missed by so many and remembered with love & appreciation. I am keeping you all in my heart and sending you my deepest condolences
Elizabeth McGloin Browne
Other
September 3, 2021
Matt, Kayla, Ava & Family, May God bless you in this time of sorrow. Our thoughts & prayers are with you in this difficult time.
Thomas/Claudia Greaser
September 3, 2021
To Arthur and family: Sorry to hear of your son's passing. May he rest in peace and God bless you.
Chris Burton
September 3, 2021
Wow! What an amazing remembrance!! The essence of Justin came shining through. My deepest condolences to the whole family. May you all find comfort in your memories.
Regina Leonard
September 2, 2021
I´m speechless; heartbroken. Barbara, Arthur, Matt, Laura and Tommy, please know you are all in my thoughts and prayers, as is Justin.
Kate Haggerty Wilson
September 2, 2021
You are loved and will be forever missed
Kathleen Haraghey
Friend
September 2, 2021
Rest In Peace Justin. A great chef and an even better person. You will be missed and remembered by all of us who knew you.
Larry Eidelman
Friend
September 2, 2021
My sincere condolences. The short time I knew chef Justin, we bonded into a friendship. I will always be happy to have crossed his path
Jerry costabile
Friend
September 2, 2021
Justin was always super kind and I loved his smirk after a playful zinger towards one of his siblings. You will be missed by many Justin. Rest In Peace
Mike Ferreira
September 2, 2021
Showing 1 - 17 of 17 results