The Most Rev. Dr. Lorraine Bouffard 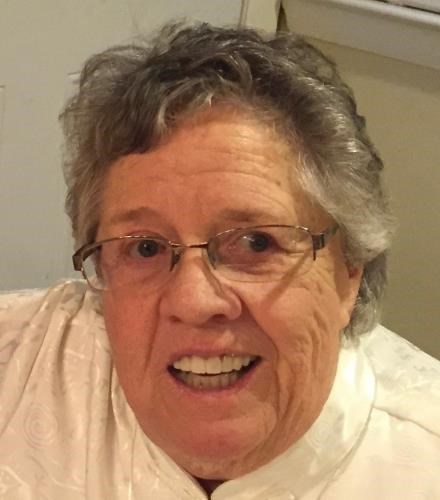 FUNERAL HOME
Duksa Family Funeral Homes at Newington Memorial
20 Bonair Avenue
Newington, CT
The Most Reverend Dr. Lorraine J. Bouffard, 80, of Hartford and Haddam departed this life on January 31, 2021. She lived a blessed life filled with many accomplishments. After graduating with honors from St. Joseph College in 1963, she joined the Peace Corps and spent 22 months in Liberia, Africa teaching elementary classes and also founded a school for non-leprous children in a nearby leper colony. From 1965 to her retirement in 1994, Lorraine was an elementary and special education teacher/administrator at Hartford West Middle School. In 1970, she received her Master of Arts in Special Education at UConn and advocated for teachers' rights and educational reform for special needs children. At the McDonough School, she taught remedial math and creative writing. She received the Teacher of the Year Award in 1992. After retirement, she was ordained to the priesthood in the Ecumenical Catholic Church and two years later received her M.A from Hartford Seminary and became pastor of Sts. Francis and Claire Church of Hartford. From 1995 to 2005, Pastor Lorraine was the host and producer of her own monthly show: "Voices in the Wilderness", taped at West Hartford Community Television. Her productions could be seen in over 100 towns and cities in Connecticut. She was the first volunteer chaplain at the newly opened York Correctional facility in Niantic from 1995 to 2009 from which she won the Volunteer Of the Year Award in 1996. During the following year she completed one unit of Clinical Pastoral Education Training at York under the auspices of Hartford Hospital and Hartford Seminary. During these years she was involved in protests and marches in support of the LBGTQ community. She was ordained Bishop of the American Ecumenical Catholic Church and founder of the Parish of the Divine affiliated with MCC of Hartford. She received her Doctorate in Theology from Hartford Seminary in 2002. In 2003 the Parkville Senior Center acknowledged her two year volunteer commitment managing the Grace Episcopal Food Pantry feeding food to over 200 families. She continued this mission through 2016. In addition, Pastor Lorraine brought pastoral services to residents at Cedarcrest Hospital in Newington and the Bidwell and Westside Nursing home in Manchester until her health began to weaken in 2019. Her survivors include her devoted brother, Ronald Bouffard; sister-in-law, Doris (Blais) Bouffard and brother-in-law, Paul L. Jacques Sr. Lorraine also leaves behind several loving nieces and nephews and their families, including great-nieces; great-nephews and great-great-nieces. She had the ability to relate to each of them as they needed, being a supporter, a sponsor, an advocate, a healer, a confidant and a champion. Nieces: Julie Jacques-Marcotte, who she treated like a daughter; Kathy Kulas Reardon; Suzanne Bouffard Mahon; Linda Bouffard Mullen; Joanne M. Jacques; Carolyn Bouffard; Christine Bouffard Fischer. Nephews: Michael J. Jacques; Ronald P. Jacques; Kenneth Kulas; Paul L. Jacques Jr; David Bouffard; Jeffrey Bouffard. She will also be missed by her many life long friends. Special thanks to Lorraine's dear friend Barbara Howe for her kindness and friendship. She was predeceased by her father, Joseph Delphis Bouffard; mother, Marie Ange (Marcoux) Bouffard Despres; sisters: Claire L. Bouffard; Pauline (Bouffard) Kulas; Doris R. (Bouffard) Jacques; brother, Roland P. Bouffard and sister-in-law, Martha (Flint) Bouffard. Newington Funeral Home is handling her preparations. The family will be having a Celebration of Life for Lorraine over the summer. Donations can be made in her memory to Loaves and Fishes Ministries Inc. Hartford; The Education Trust or a charity of your choosing.
Published by Hartford Courant on Feb. 14, 2021.
To plant trees in memory, please visit the Sympathy Store.
MEMORIAL EVENTS
To offer your sympathy during this difficult time, you can now have memorial trees planted in a National Forest in memory of your loved one.
Funeral services provided by:
Duksa Family Funeral Homes at Newington Memorial
MAKE A DONATION
MEMORIES & CONDOLENCES
Sponsored by the family.
8 Entries
Dear Mr and Mrs Ron Buffard & Family My Sincere Condolences Your are Sister was Shinning Ligth to all of You.. Julio Lesmes (Excoworker Steak club)
Julio E Lesmes
Coworker
February 23, 2021
I had the privilege to meet Lorraine at Dignity/Hartford. She was an amazing person. Rest in peace .
Robert Safner
Friend
February 16, 2021
Lorraine was such a great, long life friend of the late Rosemary Zendan. From Hartford teaching successes and union battles to correctional visits, church events, and getaways along the Connecticut River, the two enjoyed triumphs, challenges, laughter, and tears. After Rosemary’s passing, Lorraine often looked out for her neighbor, Rosemary’s husband Michael. She will be greatly missed but is more than likely already involved in some fun and joyous mischief with Rosemary and all the other angels. We extend our deepest sympathies to all and look forward to joining in a celebration of Lorraine’s impactful life when circumstances allow. - The Zendan Family
The Zendan Family
Friend
February 16, 2021
Godspeed Ms. Bouffard. So intriguing were you as a human being you've always held a place in my memory even though you were my 3rd grade teacher & it's nearly 40 years later.
Matthew
Student
February 15, 2021
Lorraine you were a special friend & neighbor to us in Haddam....
Always loved seeing you .....you were kind & funny & a very caring to us...
SAVAGE .. BELLEMARE.. FALSETTI FAMILIES.....♥♥♥
Sharen Falsetti
Friend
February 14, 2021
Dear Bouffard Family, please accept my sincere condolences for the loss of such a wonderful person.
Kathy Blais
February 14, 2021
Not often in life do you meet someone for the first and know that you have met someone who is special. That's the way it was when I met Lorraine. When she sold her lake home, she gave me a few items that she knew I would like. She also gave me and my daughter books that help us in our ministry. I will miss her smile and the joy of life that she shared with so many of us at the Regency.
Dr. Gloria Brown
Neighbor
February 13, 2021
With deepest sympathy during your time of mourning.
Newington Memorial Funeral Home Duksa Family Funeral Homes
February 14, 2021
Showing 1 - 8 of 8 results