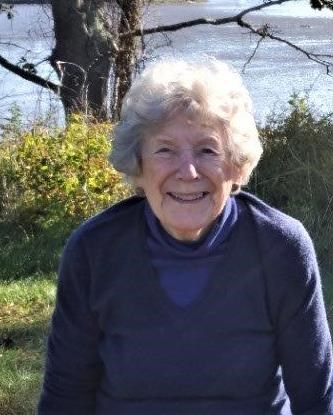 BORN
1924
DIED
2021
Madeleine Booth Sweet, of Simsbury, Connecticut and Falmouth, Maine passed away after a brief illness on July 30, 2021. Born Madeleine Tasker Polk Booth on October 6, 1924, in Harrisburg, Pennsylvania, she was the fifth of six children born to Anna Peck and Samuel Booth. Her family moved to Burlington, Vermont soon after her birth, where her father was consecrated as the Episcopal Bishop of Vermont in February 1925. Maddy would often recall moments from her idyllic childhood on the shores of Lake Champlain where she and her siblings were homeschooled by their mother. It was also during this time that she started a life-long love affair with travel. When Bishop Booth was able to take a sabbatical in Florence, Italy in December of 1934, she traveled by steamer to Europe with two of her siblings and their mother. Although their stay in Florence lasted only six months, her memories of attending the convent school and roaming the streets of Florence were vivid! She lived in Vermont until 1936, thereafter completing her high school education at the National Cathedral School in Washington D.C. She graduated from Radcliffe College in 1946 and majored in English. In 1941 she was introduced to Russell Prescott Sweet by a mutual friend. They truly "fell in love at first sight." Unfortunately, World War II intervened, and while Russ served in the Pacific theatre in the Navy, Maddy wrote him a love letter every day. The resulting marriage, in November of 1946, lasted nearly seventy years, until Russell's death in 2016. They settled in Simsbury, Connecticut in 1953 to raise their family where she became a homemaker and mother. She was an avid organic gardener, cook and seamstress as well as an ardent environmentalist, a lover of wildlife and the natural world. This was a passion which she instilled in all her children and grandchildren. In the 1960s, after reading Rachel Carson's Silent Spring, Maddy was instrumental in the banning of aerial spraying of pesticides in Simsbury. She always made her own bread and soups from scratch, and spent many hours knitting beautifully detailed sweaters for her growing family. She and Russ were founding members of St. Alban's Episcopal Church in Simsbury, where they sang in the choir, ran the church fairs, served on the vestry and where their sons became acolytes. She volunteered for many years at the McLean Home in Simsbury. In addition, she started an agency to connect high-schoolers with employers called the Youth Employment Service. Maddy and Russ traveled widely to Europe, Italy, Turkey, the Caribbean and Asia where she could engage her passion for other cultures and ancient civilizations. Active in the women's golf league for years she had many fast friends there. Sailing the coast of New England on their sailboat occupied many a happy summer season as well. She had a ready wit and great intellect, and will be remembered for, among other things,her devotion to the Sunday NY Times crossword puzzles and her liberal views on politics. Gifted with a winning smile, Maddy loved her husband, her kitchen, her cats, and babies, whether hers or someone else's. She basked in the warm moments of family life forging a unique bond with all of her grandchildren and great-grandchildren who will miss her beyond measure. She is survived by her six children: Russ, of Naples, Maine, Julian, of Owls Head, Maine, Tim, of Spokane, Washington, Curt, of South Portland, Maine, Jon of Savannah, Georgia and Eliza, of St Helena, California, in addition to ten grandchildren and eight great grandchildren, and many nieces and nephews. A memorial service will be held for her at St Alban's Church in Simsbury, Connecticut at 1 p.m. on October 10th. Donations in Madeleine's memory may be made to: The Animal Welfare Society of Maine P.O. Box 43 West Kennebunk, ME 04094.

Published by Hartford Courant on Sep. 12, 2021.
To plant trees in memory, please visit the Sympathy Store.
MEMORIAL EVENTS
Oct
10
Memorial service
1:00p.m.
St Alban's Church
Simsbury, CT
MAKE A DONATION
MEMORIES & CONDOLENCES
Sponsored by the family.
2 Entries
My family and I were blessed to have known Madeleine Sweet as a friend, neighbor and mentor. One of my fondest memories, which I'm not sure she even knew about is from the late 70's when our then 2 or 3-year-old daughter Lisa's white, long haired guinea pig, "Angel" became sick and wouldn't eat, and the vet suggested pesticide-free clover. As we'd only moved into our Brook Drive home a couple of years earlier, I wasn't sure about our own lawn's history, but already knew just where to go to pick some chemical-free clover, and so sat in the Sweet's front yard two doors away to get what I could reliably trust to be pesticide-free clover!! I'm honored to have been able to call Madeleine my friend, and to have learned so much from her & Russ, and to have had many recent hours of conversations of family & shared political views! Rest in peace Madeleine. You will be forever missed. Linda, Bob & Family
Linda Oseychik
September 14, 2021
Our heartfelt sympathies to the family with warm memories of your mother´s bright light and twinkle. A woman we admire.
Joyce, Sue and Carolyn
Friend
September 12, 2021
Showing 1 - 2 of 2 results