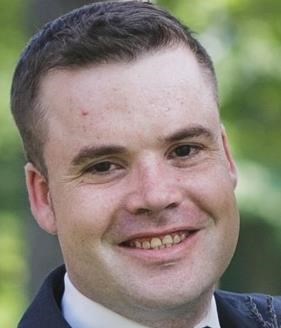 Michael F. Sullivan, 29, of Wethersfield passed away in his sleep on January 2, 2016. Mike, affectionately known as "Mikey," was the beloved son of the late Robert P. Sullivan Jr. and Mary-Anne (Mahoney) Sullivan of Wethersfield. Mike was born in Hartford on August 21, 1986, grew up in Wethersfield, and graduated from Wethersfield High School in 2005. He was also a graduate of Central Connecticut State University and, at the time of his death, was an employee of United Healthcare in Rocky Hill. Mike will be remembered for his engaging personality and great sense of humor, which made him a friend to all. He was devoted to his family and friends and was always willing to help anyone in need. His generous heart was his greatest asset. Mike lived life to the fullest and had a gift for bringing laughter and joy to his family and friends. He will be dearly missed. Mike was a devoted fan of UCONN basketball and all things Irish. In addition to his mother, Mike leaves his brother Robert Sullivan and his wife Katelyn of Wethersfield and his sister Maura Sullivan of Wethersfield. He also leaves four uncles, Vincent Mahoney and his wife Gemma of West Hartford, Rick Mahoney and his wife Ann of Wethersfield, Kevin Sullivan and his wife Betty of Old Lyme, and Tom Sullivan and his wife Peggy of Rocky Hill. Mike also leaves numerous cousins and friends. Mike was predeceased by his grandparents, Robert P. and Kathleen "Pat" Sullivan and Nancy C. Mahoney, with whom he shared a very warm and special relationship. Friends may call at the Farley-Sullivan Funeral Home, 34 Beaver Road, Wethersfield, Ct. on Thursday, January 7, 2016 from 4-7 pm. A Mass of Christian burial will be celebrated on Friday January 8, 2016 at 10:00 am in the Church of the Incarnation, 544 Prospect Street, Wethersfield. All are asked to go directly to church. Burial will follow at Cedar Hill Cemetery, 453 Fairfield Ave. Hartford. To extend online condolences, please visit farleysullivan.com.

Published by Hartford Courant on Jan. 6, 2016.
To plant trees in memory, please visit the Sympathy Store.
MEMORIAL EVENTS
Jan
7
Calling hours
4:00p.m. - 7:00p.m.
Farley-Sullivan Funeral Home
34 Beaver Road, Wethersfield, CT
Jan
8
Mass of Christian Burial
10:00a.m.
Church of the Incarnation
544 Prospect Street, Wethersfield, CT
Jan
8
Burial
Cedar Hill Cemetery
453 Fairfield Ave., Hartford, CT
Funeral services provided by:
Farley-Sullivan Funeral Home
MAKE A DONATION
MEMORIES & CONDOLENCES
Sponsored by the family.
15 Entries
Mary-Anne, Tom, Kevin -Your family always cared for ours in times of unbearable pain, and I hope you know that Paula and I have you in our hearts. Barbara TatroPaula Tatro Butler
Barbara Tatro
January 8, 2016
My sincere sympathy and condolences to the Sullivan and Mahoney families. What a terrible tragedy. I will say a prayer for Michael and hope that somehow Maryann will find some strength in the love and comfort of her family and friends.
Kevin Carroll
January 7, 2016
Remembering the glory days when we were teammates in little league baseball. So sad to hear about this :( ...Best wishes to the Sullivan family.
James Laccavole
January 7, 2016
So very sorry. My nephew Matt was so close to Mikey when growing up. I will keep your family close in my heart and prayers.
Cindy Daversa
January 7, 2016
Mary Eagan
January 7, 2016
Dear Mrs. Sullivan,
My sincere condolences,
to you Rob and Maura.
Matt Skehan
January 6, 2016
Sullivan and Mahoney Families Our sincere condolences to all of you from our family.
Frank and Joan Collins
January 6, 2016
The 3 adorable Sullivan kids across the street are among my many fond memories of Hunters Path - the boys in their hand knit sweaters (the red with the black terrier was my favorite!) and Maura in her fancy dresses. I can still picture Mikey's blond hair, big eyes and even bigger cheeks! My heartfelt sympathies to all of you. May God's army of angels wrap their loving arms around you and give you peace.
Linda (Vozzella) Lane
January 6, 2016
Rob and family,
We are so sorry for your loss. Thoughts and prayers to your entire family from ours.
Dave and Stephanie McOmber
January 6, 2016
Mary-Anne,

We are so sorry for your loss, our thoughts and prayers go out to you and your entire family.


Joan (Winiarski)Davey
and Rick Davey
Enfield, Conn/ Florida
January 6, 2016
Mary Anne, our deepest condolences to you and the family in the untimely passing of Michael. The is no greater loss than that of a child. John and Jan Flood
January 6, 2016
I am so sorry for your loss.. Mike was such a good person. He will be missed.

Joe Randazzo & Family
January 6, 2016
Maura, Rob and Family, we are deeply saddened by your loss, our hearts go out to you and your loved ones and we will keep you in our prayers.

I am so sorry for the loss of your son Michael. You are all in my thoughts and prayers.