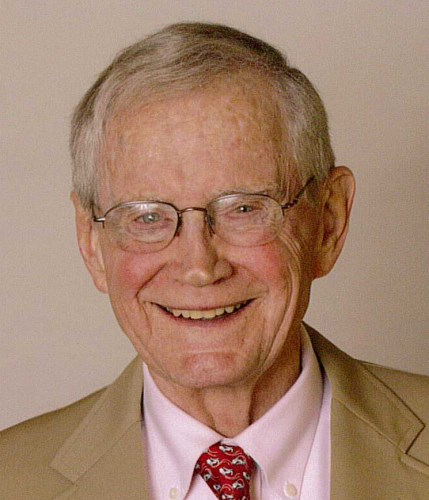 BORN
1927
DIED
2018
FUNERAL HOME
Carmon Community Funeral Homes
301 Country Club Road
Avon, CT
Peyton Hoge Mead, M.D. of Farmington, died May 3, 2018. At his side during his final days were his wife of 25 years, Mimi, and his four children. Born in Hartford in 1927, Peyton was the son of the late Cary Hoge Mead and George Jackson Mead, developer of the Wasp airplane engine and co-founder of Pratt & Whitney Aircraft in East Hartford. Peyton attended Junior School (now Renbrook), and graduated from the Hotchkiss School in Lakeville, CT, Class of 1945, and Williams College '50 (Phi Beta Kappa). In 1949 he married Sally Noyes, graduated from Williams College, and entered Columbia University, College of Physicians & Surgeons. Upon his graduation in 1954, one of the doctors commented about Peyton, "Careful worker, conscientious, reliable," words which capture not only his professional credo but also his method in everything from planning a hike to always carrying an index card on which he listed his daily docket. During his medical school years Peyton and Sally began their family, which now includes: Morgan of Cambridge, MA, Merrill Mead-Fox (David) of Wellfleet, MA, Caroline "Kaki" Gunnels (Marc) of New Windsor, NY and Jack of Blue Bell, PA, five grandchildren and four great-grandchildren, the most recent born on May 3. Peyton spent his internship and residency at Hartford Hospital and Memorial Sloan-Kettering. In 1959 he became a board certified surgeon and was a fellow of the American College of Surgeons and opened a private practice at Hartford Hospital. In 1964 he served two months on the hospital ship HOPE in Guinea, West Africa, where his surgical skills allowed him to change the lives of patients in the most dire need of medical care. After retiring from private practice in 1976, Peyton worked as an occupational physician at Pratt & Whitney Aircraft and Bristol Hospital. Having grown up on Mountain Road in Bloomfield when that was still rural countryside and spent summers at the family home on Squam Lake in NH, Peyton was a devoted outdoorsman. As a youth he helped his father cut trails and build shelters in the Sandwich and Squam mountain ranges. He skied at Tuckerman's Ravine on Mt. Washington and other slopes in New England, out West and abroad. During summer vacations he preferred clearing trails and cutting brush to any more sedentary occupations, though tennis on a gopher-holed clay court and sunfish sailing races during thunderstorms also had their appeal. In 1987 he spent a month trekking in Nepal, which included two weeks climbing to and from the Annapurna Base Camp. His other passion involved all things aeronautical. Having grown up in a house where aviation pioneers like Lindbergh, Sikorsky and Boeing were guests, he came naturally to a fascination with flight. When he was drafted into the Army in 1946, he volunteered for paratroop training at Fort Benning, GA and served 16 months in the 501st Parachute Infantry Battalion. He made 18 parachute jumps from C47's and C82's, rode in Waco army troop gliders and also earned his private pilot's license. Cary Mead later quoted her son Peyton's evaluation of the experience of his first jump: "It was like rolling off a log." When his mother turned 80 he and his siblings took her aloft in a hot air balloon. Later in life he piloted a small plane of his own that he used to explore the interior of New England, visiting friends, and dropping down over unfamiliar shores. Peyton and Sally parted in 1970. In 1992 he married Marjorie (Mimi) Patterson and they settled in Farmington. Mimi brought into his life three stepchildren: Sarah H. Maxim (Anto), Hiram H. Maxim II (Caroline), Merritt S. Maxim (Lefki), and 5 step-grandchildren. Mimi shared Peyton's enthusiasm for athletics, foreign travel, winter ski trips and summer swims in Old Lyme. When his health began to fail, she was his safe harbor. Peyton was proud to have participated in the March on Washington for civil-rights in 1963 where he heard Dr. King deliver his "I have a dream" speech, and he worked to promote racial integration in West Hartford. In retirement he volunteered with Meals on Wheels via the Old Guard. He was a member of the Old Lyme Beach Club, Farmington Field Club, and former member of the Hartford Medical Society. He was predeceased by 3 of his 4 siblings: Mary, Charles, and William (Bill). His 95 year old brother Jack survives him. Peyton's family wish to thank the staff at Caleb Hitchcock at Duncaster and in particular Keisha Thompson of Right at Home who offered great support during his final months of life. At Peyton's request, there will be no service but immediate family will celebrate his life at a private burial at Cedar Hill Cemetery in Hartford. Memorial contributions may be made to Appalachian Mountain Club, New England Air Museum, or Hartford Hospital. Carmon Funeral Home of Avon is caring for the arrangements. To leave condolences, please visit www.carmonfuneralhome.com

To plant trees in memory, please visit our Sympathy Store.
Published by Hartford Courant on May 6, 2018.
MEMORIAL EVENTS
No memorial events are currently scheduled.
To offer your sympathy during this difficult time, you can now have memorial trees planted in a National Forest in memory of your loved one.
Funeral services provided by:
Carmon Community Funeral Homes
MAKE A DONATION
MEMORIES & CONDOLENCES
Sponsored by the family.
4 Entries
mr mead was a very nice person who always greted me and my workers when we took care of his property on mt spring road. we had many laughs and interesting conversations. im very sorry to hear of the passing of peyton.mimi my thought and prayers go out to you and the family.
mark tomaszewicz
Friend
July 11, 2018
mark Tomaszewicz
July 11, 2018
I extend my heartfelt condolences for your loss. May the words at Psalm 145:18, 19 bring you comfort as you endure this difficult time of sorrow.
M.
May 9, 2018
Dr Mead was always kind and friendly. I worked with him in the 60s. He was a great colleague, a skilled physician and a skilled physician. He will be missed. Mark Izard MD
Mark Izard
May 8, 2018
Showing 1 - 4 of 4 results