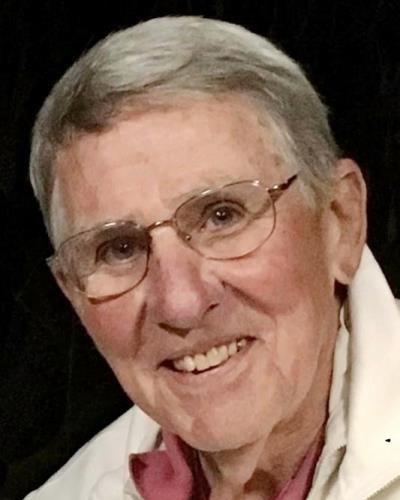 BORN
1929
DIED
2021
FUNERAL HOME
Ahern Funeral Home - Unionville
111 Main St., Rt. 4
Unionville, CT
Richard Paul Bremkamp, Jr. of Farmington, Connecticut passed away peacefully at home on June 17, 2021. Richard, known as 'Dick' to family and friends, was born in Canton, Ohio, on March 21, 1929 to Richard Paul and Helen (Fiala) Bremkamp. His first job, at the age of 10, was selling magazines door to door. At the age of 12, he started working after school and weekends at his father's gas station, Bremkamp Oil Company. Dick was a Boy Scout and played the coronet in the American Legion Junior Band. He attended Lincoln High School, where he was known for his performances in musical variety shows. While attending Kent State University, Dick was drafted into the Army during the Korean War. He was stationed at Camp Breckenridge, Kentucky, where he was a member of the 101st Airborne Division "Screaming Eagles." He attained the rank of Staff Sergeant and was in the military band. Dick remained in close contact with his Army buddies, attending annual reunions for nearly 50 years. While in the service, Dick met the love of his life, Doris Nicholson from Evansville, Indiana. They dated for ten months and were married on September 13, 1952. As newlyweds they moved to Canton, Ohio and started a family. In 1954 while working at Stahlheber Sports, Dick was approached by Bill McGowan who invited him to attend McGowan Umpiring School in Daytona Beach, Florida. At the age of 25, he became one of the youngest to graduate and got a job in the 'D' league, the highest league for first season umpires. Traveling requirements and time away from home did not lend itself to the family life he and Doris wanted, so he left his professional umpiring career and took a job as a local Sales Manager at CMW radio in Canton, Ohio. This decision led to a 35-year career as a prominent and award-winning broadcast executive. Dick served at radio markets in Detroit, MI (station WWJ), Cleveland, OH (stations WHK, WIXY-WDOK, WJW), Farmington, CT (stations WRCH-WRCQ) and St. Louis, MO (station KWK, Chase Broadcasting). Dick was at WHK in Cleveland in 1964 when the station was one of the first in the country to sponsor The Beatles. At the start of what became known as the 'British Invasion', they performed one show at the Public Auditorium. Dick received many awards throughout his career including The Gabriel Award, honoring excellence in broadcasting. After retiring from broadcasting, Dick and Doris moved back to Farmington where he began a new and unexpected 20-year career in hospitality, joining the Farmington Inn as Director of Sales and Marketing. Dick had an interest in local history and while researching places to explore for guests, he was inspired to write a story for the Farmington Inn. This led to a series of 'bedtime stories' for the Classic Hotels of Connecticut. These fictional stories were based on historical facts and many of the characters were named after his children and grandchildren. Books were placed on bed pillows at the Inns and the 5-book series became so popular that guests would ask where they could purchase copies. Soon, this creative idea was winning awards within the hospitality industry. This led to a case study which became part of the hotel management curriculum at Cornell University, the University of Delaware and Iowa State University. Dick had many affiliations and interests. He was a member of the Farmington Valley Visitors Association, Director of the Farmington Chamber of Commerce, a Board advisor for the Boy Scouts of America and an active member at Saint Patrick's Catholic Church. Dick was an avid fan of UCONN Women's basketball, making it a point to watch every game with a scotch in hand. He also enjoyed watching the Boston Red Sox and PGA tournaments. Dick had a lifelong devotion to Saint Joseph. He never complained of the difficulties in life but strived to emulate the virtues of his patron saint. He lived his life with faith, grace, mercy, courage and a sense of humor. Most of all, Dick cherished spending time with his family. His kindness and happy disposition have been an everlasting positive influence on his children, grandchildren and great grandchildren. Dick's endearing ways created wonderful lifelong memories for family and friends alike. Simply put, he was a great guy! Dick and Doris shared a love story for the ages. Watching Casablanca and drinking champagne on Valentine's Day was their favorite romantic tradition. They were each other's best friend. They enjoyed gardening, golfing, the theatre, concerts, traveling, their pontoon boat and winters in Florida. Along with his beloved wife Doris, Dick leaves four children, Rebecca Hileman (Mark), Laura Christopher (David), Richard Bremkamp III (Linda) and Amy Hardcastle (Robert), eight grandchildren and nine great-grandchildren with another on the way. Dick is survived by two of his five siblings. Sisters Jean (Bremkamp) Caster and Dorothy (Bremkamp) Bernier. Dick was preceded in death by his sister, Mary Margaret (Bremkamp) Stockdale; brothers, James Bremkamp and Robert Bremkamp. Dick was also preceded in death by many dear friends. Calling hours will be held on Wednesday, July 7 from 4-7pm at The Ahern Funeral Home, 111 Main Street, Unionville, CT. A Mass of Christian Burial will be celebrated on Thursday, July 8 at 11am at Saint Patrick's Catholic Church, Farmington, CT. Interment with the rendering of Full Military Honors will follow in Riverside Cemetery. In lieu of flowers, please consider a donation in Dick's name to the Hartford Rescue Mission providing food, clothing and shelter to those less fortunate. 650 Windsor Street, Hartford, CT 06120. To send online condolences to the family, please visit www.ahernfuneralhome.com. Joe and Shane
June 30, 2021
I too, was fortunate to work for Dick at WRCH/WRCQ. I could not have had a better mentor. He taught me to stand by my values, to take chances, and above all, to be honest and kind. Those lessons stuck. I tracked him down in August of 2010 just to shake his hand and thank him for being the catalyst for any success I've had in broadcasting. I send condolences to his family, and celebrate a wonderful, long life, well-lived. Thank you Dick. You were top-shelf.
Steve Nichols
Work
June 29, 2021
My sympathies extend to you Doris and the rest of the family. I’ll always remember Dick’s upbeat manner, smile, humor, and generosity. You both were a great example in how to raise a terrific familySaint Joseph is proud of your accomplishments. With love to all.
Steve Batthauer
Friend
June 29, 2021
Sending Doris, Amy, Becky, Rick, Laurie and the entire family much love and my deepest condolences. Dick and Doris were like second parents to me when I was growing up and Amy, my big sister. I am so sorry to learn of Dick’s passing. May God wrap his loving arms around all of you and provide comfort to you during this difficult time. Many prayers and much love being sent your way.❤
Sue Batthauer-Coates
Friend
June 28, 2021
Dearest Doris and Family, I am saddened to learn of Dick's death. I worked for him when he ran WRCH/WRCQ Radio in Farmington. He was a wonderful man to work for. A real class act.
Kate Winkeler
Work
June 27, 2021
Doris and family, my sincere condolences at Dick´s passing. Dick managed WRCH/WRCQ when I was a salesperson. I loved working for him; he demonstrated a mutual respect regardless of one´s position and was truly interested in each and every employee. He was a wonderful man. May his memory be blessing for all of you.
Gene Evans
Work
June 26, 2021
Dick and Doris have been my neighbors for 25 years. I'm saddened by this loss to the family. I met Amy a few times .. my daughter's name is also Amy
..Doris and family you're all in my thoughts and prayers and heart.
Regina Cianci
Neighbor
June 24, 2021
Showing 1 - 8 of 8 results