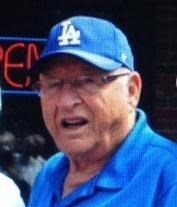 Richard L. Teed, 88, of Windsor, beloved husband of the late Virginia (LaBounty) Teed, passed away on Sunday, August 17, 2014 in Newport, Rhode Island. Dick was born March 8, 1926 in Springfield, MA to the late Leroy and Alice (Lamb) Teed. A lifelong Windsor resident, Dick had been a member of the Wilson Congregational Church. He served his country honorably during World War II with the United States Marine Corps. Baseball was always a part of Dick's life and he played with some of the greats, including, Roy Campanella, Jackie Robinson and Tommy Lasorda to name a few. After his discharge in 1947 he signed with the Brooklyn Dodgers organization and in 1953 he was called up to play with the Brooklyn Dodgers. In 1961 he was sold to the Philadelphia Phillies where he coached with manager, Frank Lucchesi. From 1964-67 he managed in the Phillies organization and in 1968 became a scout for the Phillies. In 1977 he rejoined the Dodgers, now in Los Angeles, as Head Scout for the Northeast Region and remained with them until his retirement in 1994. In 2001 Dick was inducted into the National Baseball Scouts Hall of Fame at Camden Yards, Baltimore. He was also an inductee to the Windsor High School Hall of Fame. One of Dick's favorite things was teaching young people the sport of baseball. He is survived by his children, Sharon Johnson and her husband Stephen of Windsor Locks; Susan Johnson and her husband David of Old Lyme; Sandra Stevens of Granville, MA; his brothers, Robert Teed and his wife Ann of Myrtle Beach, SC; William Teed and his wife Carol of Enfield; ten grandchildren, Kelley Barnowski and Ryan Glastein, Bryan Barnowski, Todd Johnson and his wife Sharon, Kate Stopa and her husband Travis, Scott Johnson and his wife Lisa, Lindsey Jones and her husband Paul, Brittany Johnson, Kari Mullins and her husband Chris, Stephanie Johnson and Mark McDonald, Haley Johnson and Collin Henry. He also leaves five great grandchildren, Paige, Parker, Whitney, Tucker and Gavin. In addition to his wife and parents he was predeceased by his daughter, Shelley Teed and his son-in-law, Steve Stevens. A Funeral Service will be held on Friday, August 22, 11 a.m. at the Carmon Windsor Funeral Home, 807 Bloomfield Ave., Windsor. Burial with military honors will immediately follow in Windsor Veterans Memorial Cemetery. His family will receive friends on Thursday, August 21, from 4-7 p.m. at the funeral home. Donations in Dick's memory may be made to the Dick Teed Scholarship Foundation, c/o Webster Bank, 176 Broad St., Windsor CT 06095. For online condolences please visit www.carmonfuneralhome.com.

Published by Hartford Courant on Aug. 20, 2014.
To plant trees in memory, please visit the Sympathy Store.
MEMORIAL EVENTS
Aug
21
Visitation
4:00p.m. - 7:00p.m.
Carmon Funeral Homes, Inc.
807 Bloomfield Avenue, Windsor, CT
Aug
22
Funeral service
11:00a.m.
Carmon Funeral Homes, Inc.
807 Bloomfield Avenue, Windsor, CT
Aug
22
Burial
Windsor Veterans Memorial Cemetery
CT
Funeral services provided by:
Carmon Funeral Homes, Inc.
MAKE A DONATION
MEMORIES & CONDOLENCES
Sponsored by the family.
15 Entries
I remember when I was 14 and Dick took me to a Bristol high school baseball game to scout. Sandy was in my class but not sure how this got set up. What a great experience. Thank you Mr. Teed! Still a great memory of mine.
Derrick Simons
October 13, 2018
Very sad day when I heard the passing of a great friend - Dick & I worked together for the Dodgers for many years - he was not only a Good man but a great friend - I will miss him dearly - we spoke about weekly on the phone - about great memories with our Dodger Scout reunions in Hudson NY - he organized these reunions for all the years for over 25 yrs. Our thoughts and prayers are with the Teed Family - God Bless you my old friend - rest in peace - Bob & Boots Miske
Bob & Boots Miske
August 25, 2014
To The entire Teed Family - so sorry to hear of your loss. Accept my sincere sympathy.
Marcy Galinsky-Slye
August 24, 2014
Dear Family, We send our deepest sympathy. Uncle Dick had such an impact on my life. I can't say enough good things about my uncle and the man he was. He will be missed greatly by you all and so many others. He gave us all great memories and those will have to carry us. God bless.
Jim & Donna Fusco
August 23, 2014
We send our thoughts and prayers. My grandmother Una Kent (LaBounty) and my mom Lesley Willadsen cared very much for Richard and talked about him all the time, and about Shelly.
Aaron Alan McLean
Una Kent
Lesley Willadsen
Lesley Willadsen
August 23, 2014
Sandy, Sue, Sharon and family,
Sorry to hear of Dick's passing. He was a great guy who always helped and encouraged me in my playing days. A true gentleman.
Dave Blanchard
August 22, 2014
To the Teed family, please accept my sincere sympathy at this difficult time. We are never ever ready to lose the ones we love. Your Dad and Mom had a major impact on my life as being the leaders of our Pilgrim Fellowship Group. So many happy memories of my teen years comes from their love and compassion. RIP Mr. Teed
Alicia Urbanski Small
August 21, 2014
To the Teed Family,
Deepest sympathy for the lost of Dick. I have known him for many years, he was a great man and neighbor.
Tom Danner Family
Tom Danner
August 21, 2014
Dear Teed Family,

My deepest sympathy to you all. Dick was a tremendous person, a longtime friend, and someone who had a significant influence on me and my life. He was a great friend to my parents for the past 30 years. He was an inspiration to my sons and a strong supporter of them and countless numbers of their teammates over the years. In all, he had a positive impact on three generations of my family and I am forever grateful for it. Dick always had a smile and an encouraging word. His passion for baseball was infectious and his love for instructing the game continues to benefit many. I owe Dick an awful lot and will miss him dearly.
Mike Schweighoffer and Family
August 21, 2014
I had the pleasure of knowing Dick . I met him at Webster Bank and he always had a smile and a great ball story to share. He was a great man and I will miss him. God bless to all his family of which he was very proud.
Mary Welenc-Pastula
August 20, 2014
Oh my how sad i am to hear your wonderful poppie passed away.I too loved him and my heart smiles,when i imagine his beautiful smile and laughter, he loved You all so much,and im sure you'll,hear from many people, he made anyone he meet feel like family too!!,i will keep you all in my prayers,my heart holds a special part for poppie.love Julia(waitress from UST)that moved to PBG,FL.Look us up Brian when your here1-860-752-2753.
Julia Griffith- Mele
August 20, 2014
To the entire Teed family, we are so very sorry to hear of Richard's passing. Over the years I have had the pleasure of sharing in a Teed family celebration where Dick was present. I feel honored to have known him. You are all in our thoughts and prayers during this very difficult time. Hold your memories close to your heart as they will carry you through. Our deepest sympathy to all.
Tim & Mary Falco
August 20, 2014
So sorry for your loss. I know Dick and Dad (Bud Russell) are playing ball in a Field of Dreams.
Toni Russell Lobdell
August 20, 2014
Truly one of the very best! RIP...love
Kathy Cunningham
August 20, 2014
With deepest sympathy during your time of mourning.
Carmon Funeral Homes, Inc.
August 20, 2014
Showing 1 - 15 of 15 results