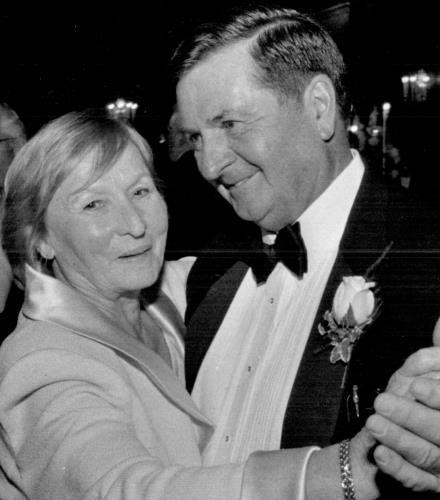 Robert Herrick Trewhella aged 88, beloved husband, father, stepfather, grandfather, and great grandfather passed peacefully from this life on Wednesday, May 5, 2021 at his home in Natick, MA. "Bob" was born in Hartford, CT and grew up in East Hartford, CT. He attended The Loomis Chaffee School and Babson College, graduating in 1954 with a BA degree in Business Administration. Thereafter he began a long and successful career in banking at Hartford National Bank and First Federal Savings and Loan in East Hartford, rising to the level of executive Vice President. He subsequently assumed the role of President and Chairman of the Board of the Harrisburg Savings and Loan in Harrisburg Pennsylvania. During the 1970's and 80's he lived in South Windsor, CT, where he was actively involved with the Congregational church, town politics (serving as town treasurer and town council member), and Rotary Club. A life-long sports enthusiast, he coached for several seasons in the town youth basketball league and remained a passionate golfer and Red Sox fan. After retiring to Estero, Florida, Bob and his wife Kay enjoyed an active life for almost two decades with numerous friends, children, and grandchildren. They were avid golfers and travelled extensively. Bob and Kay returned to New England in the 2010's to be close to family. Bob is survived by his siblings Jane Wagner (Eugene Wagner), Edward Trewhella (Lynn Trewhella) his daughter Tracy Trewhella (Douglas Taylor), his stepsons Robert Woodard (Blanca Woodard), Stephen Woodard (Linda Woodard), Eric Woodard (Julia Woodard), and numerous grandchildren and great grandchildren. He is predeceased by his wife Audrey "Kay" Trewhella, his daughter Ruth Trewhella, and his sister Martha Trewhella. Services will be private. Suggested memorial donations may be made to the Alzheimer's Association.
Published by Hartford Courant on May 16, 2021.
To plant trees in memory, please visit the Sympathy Store.
MEMORIAL EVENTS
To offer your sympathy during this difficult time, you can now have memorial trees planted in a National Forest in memory of your loved one.
MAKE A DONATION
Please consider a donation as requested by the family.
MEMORIES & CONDOLENCES
Sponsored by the family.
0 Entries
Be the first to post a memory or condolences.