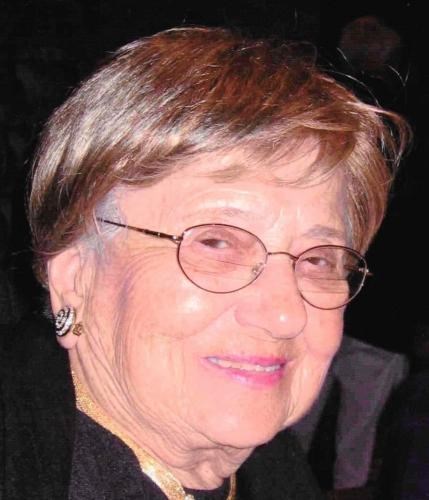 Rose Worobel of Newington, CT died September 26, 2015. She had been residing at Jefferson House in Newington, CT. Rose was born on July 10, 1920 in Hartford Connecticut. She spent her latter years in Newington. She was predeceased by her parents Henry and Eva Dika Worobel; brother john Worobel; and nephew William Irelan. She is survived by a sister Jennie Irelan of Texas; nieces and nephews Dika (William) Swartzel of Ohio, Patricia (Craig) Young of Tennessee, Peggy (David) Holland of Ohio and Frank (Marilyn) Irelan of Alaska. Rose has many grand nieces and nephews and great-grand nieces and nephews in many locations in the United States. She has numerous cousins in Ukraine. Rose attended Lawrence Street School and Bulkley High School in Hartford. She graduated from Bates College in 1942 with a B.S. in Math and Physics. She received her M.S. from RPI Graduate Center in 1959. Rose was employed by Hamilton Standard as an engineering aide after completing courses at Penn State in 1943. She worked in aeronautics and retired in 1977 as a senior analytical engineer. Rose was the first woman recipient of the SAE Manley Award for a paper she co-authored with Bruce Metzger. Rose was a member of AIAA and the Society of Women Engineers. In 1980, she was appointed by Gov. Ella Grasso to serve as a Public member of the State Board of TV and Radio Examiners. Rose was a member of Zonta Club of the Greater Hartford area and, with member assistances, conducted Travelogues, career talks and essay contests at the former Barnard Brown School in Hartford for many years. She especially enjoyed working with Elaine Ludwig and her first grade classes. Rose was involved with a project with the American School for the Deaf. The school was using a book which contained rough sketches. A new book was created with photographs taken by Rose. This book was used for teaching and assessing general knowledge. Rose was a member of the Ukranian National Women's League, Belle's of West Hartford and Nutmeggers Camera Club. Thanks to the nurses and CAN's at Jefferson House, especially Jeanette, Yomayra, Yazmin, Viviana, Madeline, Polly and Rosario for the exceptional care and laughter they provided. Special thanks to Jeri Lynn Turkowitz for her loving care and being Rose's secretary during the past several years and during her illnesses. Private services will be held at a future date. Donations in memory of Rose may be made to the Worobel Scholarship at Bates College, Lewiston, ME 04240.?

To plant trees in memory, please visit our Sympathy Store.
Published by Hartford Courant on Sep. 30, 2015.
MEMORIAL EVENTS
No memorial events are currently scheduled.
To offer your sympathy during this difficult time, you can now have memorial trees planted in a National Forest in memory of your loved one.
MAKE A DONATION
MEMORIES & CONDOLENCES
Sponsored by the family.
3 Entries
Dear Ms. Irelan,
Alpha Kappa State members of the Delta Kappa Gamma Society International extend deepest condolences on the loss of our chapter honorary member, Rose Worobel. She joined our Society in 1999. She will be honored in Ceremonies of Life at the Connecticut State Spring Convention in April, 2016 and at the International Convention in Nashville, Tennessee, this summer.
May she rest in peace,
Theresa Azoti
Alpha Kappa State
Immediate Past President
The Delta Kappa Gamma Society International
October 20, 2015
I worked at Jefferson House in Recreation and one of my favorite programs was Life Stories. Rose's stories always amazed me. She paved the way for so many women and loved sharing her knowledge. She was an extraordinary woman. My condolences.
Linda Hassett
October 3, 2015
Rose worked in the Propeller Aerodynamics Dept. at Hamilton Standard. She programmed the propeller aerodynamic analysis when computers were just starting to be used for engineering. That program is still in use today. She was wonderful to work with.
Robert Menthe
September 30, 2015
Showing 1 - 3 of 3 results