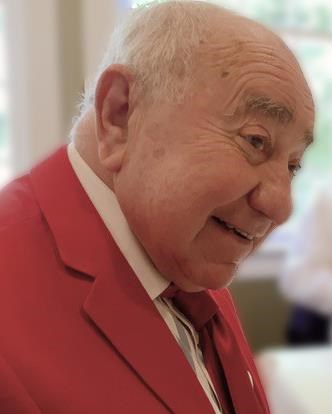 BORN
1929
DIED
2021
FUNERAL HOME
Carmon Community Funeral Homes
301 Country Club Road
Avon, CT
Silvio Tagliamonte, 92 of Avon, passed away peacefully at UCONN John Dempsey Hospital on Sunday, September 19, 2021. Born in Ponza, Italy on March 24, 1929, the son of the late Aneilo and Estella (Scotti) Tagliamonte. He immigrated to the United States as a child, was raise in the Bronx and graduated high school. Silvio proudly served his country in the United States Army, attaining the rank of Sargent during the Korean War, he was stationed in Germany. Silvio lived for many years in Philadelphia, it was here established his career as an office manager for Pittsburgh Plate Glass and supported his community. He was an active member of Kiwanis, a dedicated Knight of Columbus, a member of the Optimist Club, fundraiser for March of Dimes and a yearly supporter of the Mummers Parade which he loved to attend. He was an avid Philadelphia Eagles fan. Prior to living in Philadelphia Silvio was also active in his community in Baldwinsville, New York where he supported St. Marys Church and the Volunteer Ambulance Core. He is survived by his daughter; Lucille M. DiBella and her husband Thomas of Punta Gorda, FL, his son; Neil Tagliamonte of Granby, his grandchildren; Marissa DiBella of Seattle, WA, Dylan DiBella of Seattle, WA and Gabriel Tagliamonte of Los Angeles, CA. Silvio's family will receive friends on Friday September 24th from 10:00 to 11:00 a.m. at St. Patrick's Church, 7 Burlington Ave, Collinsville, CT 06019. A Liturgy of Christian Burial will follow beginning at 11:00 a.m. at the church. Burial will be private and at the convenience of the family. In lieu of flowers, donations in Silvio's memory may be made to the National Alliance on Mental Illness. (NAMI Seattle), 802 NW 70th Street, Seattle, WA 98117. For condolences, please visit www.carmonfuneralhome.com.
Published by Hartford Courant on Sep. 22, 2021.
To plant trees in memory, please visit the Sympathy Store.
MEMORIAL EVENTS
Sep
24
Visitation
10:00a.m. - 11:00a.m.
St. Patrick's Church
7 Burlington Ave, Collinsville, CT
Sep
24
Mass of Christian Burial
11:00a.m.
St. Patrick's Church
7 Burlington Ave, Collinsville, CT
Funeral services provided by:
Carmon Community Funeral Homes
MAKE A DONATION
MEMORIES & CONDOLENCES
Sponsored by the family.
1 Entry
Lucille and family- I am sorry to hear about the loss of your father. May you find comfort in the days ahead. Our thoughts and prayers are with you. BrightStar Care of Hartford Team of caregivers, nurses and staff
Laurie Foster
Other
September 22, 2021
Showing 1 - 1 of 1 results