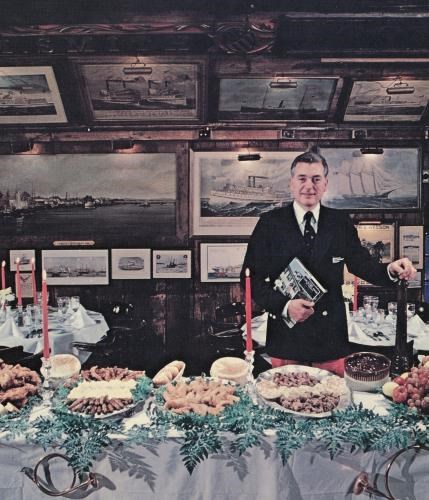 William G. Winterer (1934-2016) William George Winterer, former owner of the historic Griswold Inn in Essex, Connecticut, devout Roman Catholic, fierce defender of free enterprise and personal liberty, raconteur, and philanthropist, died peacefully at his home in Boca Grande, Florida on 19 February 2016. He was 81 and had been in failing health for several months. Bill was born on 7 July 1934 in St. Louis, Missouri, the son of Dr. Herbert O. Winterer and Dorothy Sprengnether. Bill graduated from the University of Florida and earned an MBA from the Harvard Business School. After University of Florida graduation, he became a United States Coast Guard officer and was initially stationed in San Juan, Puerto Rico on the buoy tender Sagebrush and then in New London, Connecticut where he was a navigator of the barque Eagle and ran the mess hall at the Coast Guard Academy. After business school, he moved to Phoenix, Arizona and then New York City where he was an investment banker for Goodbody & Company and later CEO of Florida Capital Corporation. In 1972, Bill purchased the venerable Griswold Inn and began a second successful career as a restaurateur and inn keeper. For twenty-five years he made the business thrive and expand, at one point including two other Connecticut restaurants in addition to "the Gris," the Town Farms Inn in Middletown and the Dock 'n' Dine in Old Saybrook. Bill's larger-than-life personality thrived - he was the ultimate host and entertainer, always putting others at ease, offering a smile and handshake, providing food and drinks and regaling audiences in stories for hours-on-end. He and his wife contributed to the communities in which they lived. Bill was a Life Trustee and Founding President of the Connecticut River Museum in Essex. He started the board of the Ivoryton Playhouse Foundation. He was on the board of advisors of the Goodspeed Opera House, the USS Constitution Museum, the National Maritime Historical Society, and United Bank & Trust Company. He sat on the Connecticut Historical Commission as well as the Boca Grande Historic District Commission. Bill was awarded the Connecticut Distinguished Citizen of the Year in 1996. Bill is survived by his wife of nearly fifty years, the former Victoria Mather Thompson. He is also survived by his sons William G. Winterer, Jr. and his wife Emi of Boston; Andrew H. Winterer and his wife Shannon of Missoula, Montana; Britton T. Winterer and his wife Rosy Keyser of Brooklyn; and Mark Winterer and his wife Lauren of Winchester, Massachusetts. He is further survived by two sisters - Suzanne Winterer Camp of Ft. Lauderdale, Florida and Rosemary Winterer Pacini of Florence, Italy - and by five grandchildren - Winslow, Waverly, Harriet, Elias Fox and Josephine. He also leaves behind two standard poodles - Charlotte and Julia. A funeral mass will be held at Our Lady of Mercy on Boca Grande at 11:00 AM on Wednesday, February 24th. Donations in lieu of flowers may be made to the Island School Foundation, PO Box 1090, Boca Grande, Florida 33921 or a charity of the donor's choice.

To plant trees in memory, please visit our Sympathy Store.
Published by Hartford Courant on Feb. 21, 2016.
MEMORIAL EVENTS
Feb
24
Funeral Mass
11:00a.m.
Our Lady of Mercy on Boca Grande
, FL
MAKE A DONATION
Please consider a donation as requested by the family.
MEMORIES & CONDOLENCES
Sponsored by the family.
15 Entries
Rest easy Bill. Bill helped me get started in the restaurant business in 1976. He was gracious and generous. I want new to Old Saybrook and near broke. He gave me some old equipment,tables,chairs,etc and I was off and opened in August1976. The CUCKOO'S NEST was bornI'll always be grateful Rest easy Jim Fitzpatrick
James m Fitzpatrick
February 29, 2016
Wonderful William will be much missed by all his friends who so enjoyed his wit, humour and kindness. Bill we we remember your warmth for years to come. Hope fully you will enjoy premium dockage in your new home. May GOD rest your soul in comfort for ever.
John Mendez
February 24, 2016
The Gould family is just so saddened by the loss of Bill and have been reflecting on what a great man he was. He had such love for his family and Laurie & I will be forever grateful for our family's joint share of our 40th Wedding Anniversary celebration at Turtle Bay. Oh the memories and as his legacy will continue to shine brightly on us all.
Jeff Gould
February 23, 2016
Dear Vicki,
My heart and my thoughts are with you and your family. I am so sorry for your loss.
Sincerely,
Rhonda and Ron Aigen
(Dear friends of Terry)
February 22, 2016
Dear Vicki:
I'm so sorry for your loss. We had such a wonderful time visiting you and Bill (and the pups of course) the past few years in Boca Grande.
We also had such a fun dinner with him at The Gris a few years back where Dad and I loved hearing all his wonderful stories.
My thoughts are with you and your family.
Love,
Edie
Edie Meyer
February 22, 2016
2/22/16

I was deeply saddened to learn today of Bill's death last Friday. He always brought a smile to my face and heart. Among raconteurs he had few equals. He was an accomplished man, and a lucky one ... over the decades enjoying your quiet unstinting love. Thank you for being Bill's pillar of support ... and your family's. You are a treasure!

Although unable to attend Bill's funeral Wednesday at
St. Mary's, I will be thinking of you and your loved ones at
11 am, and sending prayers for the repose of Bill's soul.

"Rest eternal grant to him, O Lord:
And let light perpetual shine upon him." (BCP p.486)

Fondly, Read+
February 22, 2016
Dear Vicki, Drew, Britt, Mark and families,
I was saddened to hear about Bill's passing. I have many memories of him and the family during the years the boys swam at the Y. I always think of him when I am at the Gris. My sincere condolences to all of you.

Chris
Chris Kelley
February 21, 2016
Dear Vicky, Buff, Drew, Britt and Mark, I am so sorry to hear of Bill's passing. He was such a gregarious, wonderful, full of life gentleman. I always felt so honored to know the whole family. My heart, thoughts and prayers are with all of you. xoxoxoxoxoxo
With love and respect,
Marilyn Grote Malcarne
Marilyn Grote Malcarne
February 21, 2016
As a roommate at Harvard, Bill was always larger than life. He was a hospitality expert by nature - warm, personable and caring; no one left his presence without feeling Bill was a friend for life. I, and many others will miss him sorely; the world will seem a little less friendly without him.
Clark Phippen
February 21, 2016
I find tears in my eyes after all these years . I feel so very sorry for you and all of us will miss Bill so much. Bill was a man so important in my life . Both Vicky and Bill are God parents to my daughter Tamsin. He supported me in the hardest days of my life. Bill was the last of the best in men in our world ; Generous, kind, strong, he was a renisounce man . I fell so sorry for Vicky and the boys . My deepest sympathy. Dena Chance DeSena
Dena Chance DeSena
February 21, 2016
Sincere condolences Vicki. Just last week, I was thinking fondly of summer lunches Lazor, Bill, and I shared on the river's edge from the sandwich shack in Deep River. We always smiled that it made us feel a tinge of "Huck Finn" despite we three "older boys" sharing a large bottle of Bill's favorite merlot. I have always kept a case or two at hand and regale friends with how Bill brought this wine into my life and so many great moments of happiness.
Thank you Bill for all your heart led you to do for so many others.
R.I.P. ... across the bar in safe harbor.
Arthur & Linda Langley
Hardwood Point
Arthur & Linda Langley
February 21, 2016
Love and sympathy to Vicki and family. Bill will be remember with great fondness. Essex has lost a true pillar of its community.
Shirley Carta
February 21, 2016
Dear Vickie and boys - we were so sad to learn of Bill's passing. He was a great guy and when Strick broke his hip, 6 years ago, Bill was one of the first to call to see how he was doing. We enjoyed seeing you at different events and can only pray that he is a peace. Hope to see you when you return.

With our sincere sympathy to you and his wonderful family.
Strick & Donna Hyde
February 21, 2016
I was so sorry to hear of Bill's passing. I will always remember him fondly for his uniqueness and his zest for life. His love of sailing, of history and of Essex was evident in all he did in the community. After purchasing the Gris from my father in the early 70s up until my father's death a few years ago, he was a loyal friend. I will always remember how kind he was to my Dad during the difficult times and how generous he was during the good times. My thoughts are with the whole Winterer family.
Deborah Lovell
February 21, 2016
I knew Bill Winterer from almost the day he and Vicky met-his influence and impact were profound. He touched the lives of
ANYONE and EVERYONE who met him-whether it was for a moment or.....There is not enough room to describe EVERYTHING
that is memorable about Bill: he had a wonderful sense of humor,
he possessed infinite capacity for love: for his family, his friends (even those whom he loved to debate due to different views
on many topics) AND, of course, his poodles. We shared
many many wonderful moments, from the great meals he
prepared for me in Essex (tongue and liver were OUR
favorites and no one could cook them as he did), to his
son Mark's wedding in October 2014, to his grandchildren
who expanded his capacity for love to depths that everyone
could not help but find moving. His accomplishments were
myriad and he loved to share these-always with humor. Bill
was impressive, complex and his vitality will live on forever.
He will be missed but NEVER FORGOTTEN!!
ruth Kramer Ziony
February 21, 2016
Showing 1 - 15 of 15 results