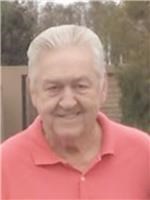 BORN
1945
DIED
2021
FUNERAL HOME
Munden Funeral Home & Crematory
2112 Arendell Street
Morehead City, NC
James "Jim" William Elzy III, 75, of Atlantic Beach, passed away on Tuesday, August 31, 2021, at Carteret Health Care. He will be laid to rest at Bayview Cemetery in Morehead City, North Carolina.
James was born on September 23, 1945, in Jefferson County, Kentucky, to the late James Elzy Jr. and Mary Louise VanWinkle. Honorably serving in the United States Air Force, James, was a skilled aircraft mechanic. Later working for the Louisville Police Department and retiring as a detective after 21 dedicated years.
In 2014, James and his wife Jenny returned to the Crystal Coast where they have enjoyed their retirement years. He cherished spending time with his grandchildren. You could be sure that wherever his wife Jenny was, he'd be right by her side.
He is survived by his loving wife, Jenny Elzy of Crystal Coast; daughters, Michelle Millet and husband Scott of New Bern, Renee Jefferies and husband Steve of New Castle, KY, and Jeanette Vallecillo and husband Anthony of Jacksonville; sister, Rita Snyder of Ohio; brother, Lionel Elzy and wife Karen of Indiana; 14 grandchildren; 3 great-grandchildren; and faithful service dog, Duke.
In addition to his parents, he was preceded in death by his son, Todd Elzy; sister, Doris Mullins; and brothers, Arthur C. Elzy and Joseph Elzy.
Family and friends are welcome to submit online condolences at www.mundenfuneralhome.net
Arrangements by Munden Funeral Home & Crematory in Morehead City, NC.
Published by Henry County Local from Sep. 22 to Sep. 29, 2021.
To plant trees in memory, please visit the Sympathy Store.
MEMORIAL EVENTS
To offer your sympathy during this difficult time, you can now have memorial trees planted in a National Forest in memory of your loved one.
Funeral services provided by:
Munden Funeral Home & Crematory
MAKE A DONATION
MEMORIES & CONDOLENCES
0 Entries
Be the first to post a memory or condolences.