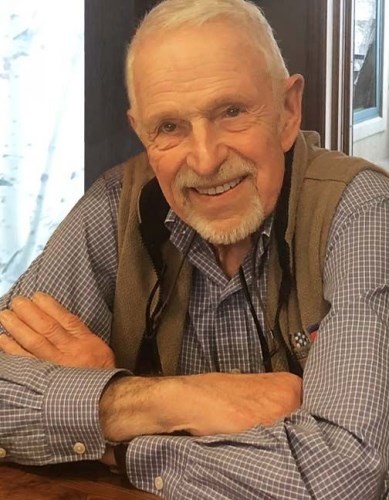 As the sun rose on September 14, 2021, Arnold Keith Lyon hiked to his final destination. Our beloved Arnold (aka: AK, Arnster, Arnie, Packrat, Frog, Doc) was born in Topeka, Kansas, to Lois and Frank Lyon in 1938. His younger sister, Pat (Reineke), completed the family five years later. Arnold came into this world with a spirit of adventure and a thirst for knowledge.

In 1950, his family moved to St. Joseph, Missouri, where he attended Central High School and spent most of his time bowhunting, spearfishing, and playing basketball and baseball. (As if by fate, he had a tooth knocked out on a pitch by future Hall of Famer, Don Drysdale.) His sophomore year, he met Donna Sue Jones – the best catch of his life. From that point on, she wholeheartedly supported his dreams and adventurous spirit. They made the perfect team whether canoeing the Ozarks, sailing the Great Barrier Reef, hunting in the Yukon, skiing Big Sky and Chamonix, horse packing into the Bob Marshall Wilderness, or selling Hobie Cat sailboats. The list goes on. They were married in 1959, and adventure was one of the core tenets of their life together.

After graduating from Northwest Missouri State in 1960, Arnold and Donna Sue moved to Kansas City, Missouri, where he could pursue his postgraduate degree in dentistry. They belonged to a canoe club and spent most of their free time canoeing with friends. In 1966, they moved to Wichita, Kansas, to build a thriving periodontal practice and welcomed their eldest daughters, Courtney and Shelby. In Wichita, their most significant resource was the wind; this is where they discovered sailing. Nothing stopped them from sailing or racing sailboats, not even a newborn and a three-year-old, who often were their sailing mates.

After eight years in Wichita, they began their next chapter in Helena, Montana, where they purchased a McDonald's franchise and welcomed their third girl, Megan, to the family. After five years of fast food and a bustling business, Arnold returned to his true passion, periodontics. He built a professional practice that lasted 30 years and was founded on close community and a core staff in Helena and Butte. Most everyone knew Dr. Lyon for his passionate work ethic but mostly his caring and enthusiastic chairside manner. He was renowned for his kindness, honesty, and integrity. In addition, he cared deeply for his family, friends, and patients.

Arnold's curiosity made him a consummate learner and teacher throughout his life. Moreover, his knowledge was contagious; he wanted to share his adventures with his three girls, close friends, and extended family. As a result, he always made time to take a friend or relative fishing, hunting, horseback riding, skiing, or sailing.

Arnold was a fantastic leader as well as a great listener. He constantly pushed himself to learn new skills, such as skiing at age 35, building a log cabin, and crafting a wooden drift boat. In addition, he was passionate about his faith, poetry, Warren Miller ski movies, dogs, baking, cooking, and a well-built fire.

Arnold lived 1000 years in the 82 calendar years of his life. His thirst for knowledge and analytical mind led him to pursue endless learning by reading voraciously and always taking copious notes. As a result, he left detailed journals cataloging essential data, such as the number of days (tallies) he spent on various waterways or the countless trails he hiked in and around Helena. Most importantly, he leaves a legacy of love as an incredible husband, father, brother, Grandpa/Papa, uncle, friend, father-in-law, and student of life.

He leaves behind a massive fan club.

We adore you AK. Keep your ski tips up!!

Due to Covid, a private family memorial has been planned. Please visit this link for more information: www.AKLyon.com. In lieu of flowers, please consider donating to Farm in the Dell or Prickly Pear Land Trust in honor of Arnold.

Published by Helena Independent Record on Oct. 6, 2021.
To plant trees in memory, please visit the Sympathy Store.
MEMORIAL EVENTS
To offer your sympathy during this difficult time, you can now have memorial trees planted in a National Forest in memory of your loved one.
MAKE A DONATION
MEMORIES & CONDOLENCES
1 Entry
Judy and I knew Donna Sue and Arnold through Plymouth Congregational. They were such a joy to be around. Ever the teacher Arnold taught me the proper knots to use when tying up your hiking boots- that I was supposed to know more about since I was selling the boots to him! I still go hiking weekly and each time I lace up my boots I always think of Arnold. What a great family.
Bill Coddington
Friend
October 7, 2021
Showing 1 - 1 of 1 results