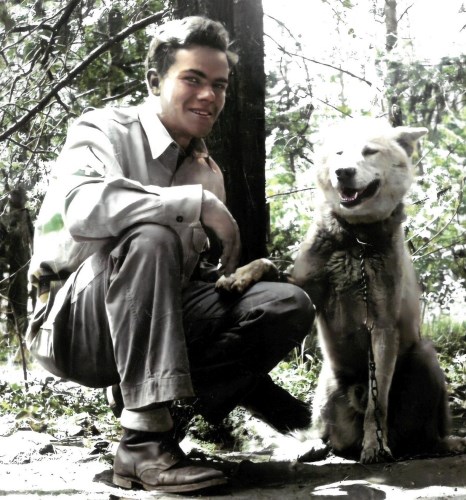 A WWII veteran he entered the service in September 1942 where he began serving in the Army Air Corps. He was transferred into the Army Quartermasters Corps in January 1943. He was sent by boxcar with 40 dogs, several sleds and harnesses to Camp Rimini War Dog Reception and Training Center. They arrived in February 1943. At Camp Rimini he led the training of over 850 sled dogs and 100 pack dogs as well as GIs as mushers and handlers. In December of 1943, he was shipped out to Stevensville Newfoundland on a cargo plane with 13 sleds and 18 dogs. He was then transferred to the North Atlantic Wing AAF Search and Rescue Unit where he and his dogs aided in the recovery of down personnel and sensitive equipment from aircraft wreckage sited in Newfoundland, Greenland, and Baffin Island. In December of 1945, he was discharged from the service as a Technical Sergeant. He was the last known living service member of Camp Rimini.

After the war he married Helena native Alice M. Larson in September 10, 1947. Using the GI Bill, he received a bachelors from Colby College, and a masters from New York University.

Prior to returning to Helena, he was the Executive Director of the Boy's Clubs of America at Augusta Georgia, Richmond Virginia, and Ludlow Massachusetts. He retired as administrator of the Montana Veterans Affairs Division in December of 1982. He served as American Legion Department Service Officer. He was a co-founder of the Montana 500 Sled Dog Race now known as (Race to the Sky Dog Sled Race) and served as treasurer of the Montana Mountain Mushers. He served on the advisory council of the Michael Kellner Foundation for Animals, now known as the (Foundation of Animals). He served on the Board of Directors of the Montana Military Museum located at Fort Harrison. He was a member of the American Legion of Foreign Wars.

David was proceeded in death by his parents, wife Alice, brothers Robert and Phillip, and great grandchild Jasmine. He is survived by his sons David, Erick, and Mark. His grandchildren Christinia, Carolyn, Danielle, Sean, and Rhiannon and his five great grandchildren Kento, Franklyn, Ethan, Mae, and Ollie.

Donations can be made in his name to the Montana Military Museum, Foundation for Animals, and Saint Peters Episcopal Cathedral.

Published by Helena Independent Record from Apr. 14 to Apr. 20, 2021.
To plant trees in memory, please visit the Sympathy Store.
MEMORIAL EVENTS
Apr
26
Memorial service
11:00a.m.
Spring Meadow Lake Pavilion
MT
Funeral services provided by:
Anderson Stevenson Wilke Funeral Home & Crematory
MAKE A DONATION
MEMORIES & CONDOLENCES
Sponsored by Anderson Stevenson Wilke Funeral Home & Crematory.
4 Entries
My family rented from Dave and Alice in the early 1980's. Dave and Alice were wonderful people that we will never never forget! Rest in Peace*
Donna Black
August 2, 2021
We covered thousands of miles together. It was grand. I trained two teams to try to get you to the finish line. We made it to seeley lake, And somehow our boots disappeared. You were and are a great inspiration. It was a fair deal: You grumbled, never whined. I loved all Of it. Thanks
Mark Ibsen MD
April 16, 2021
Thank you for your service and sled dog memories Dave. I'm still sorry for turning the sled over twice while you were trying to teach me the ropes. I will always remember your laugh as you slid sideways in the sled as I stood there watching you and the dogs disappear. I can never forget helping to turn the sled at the steep turn the year Austin Road was included in the Race to the Sky. I watched a great man in his 70s head into the black night with out an ounce of fear. You are my hero Dave and the picture of what a man should be. Say hello to Alice for me, rest well and I'll see you soon my friend.
Rick Cochrane
April 15, 2021
May the love of friends and family carry you through your grief, and find comfort from knowing that God draws close to the broken-hearted.
T. D.
April 14, 2021
Showing 1 - 4 of 4 results