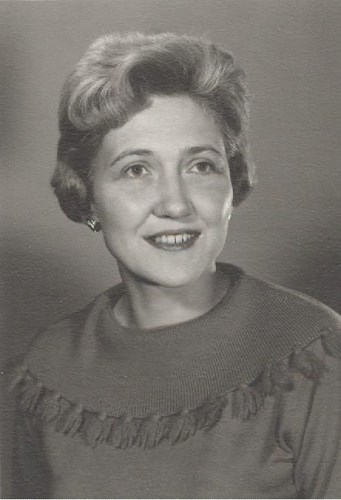 Elaine Verdon, a life-long Montana resident, died Wednesday (Oct. 13) at the Touchmark memory care unit in Helena after suffering with Alzheimer's disease. She was 91 years old.

She was born Iris Elaine Hendrickson on Dec. 1, 1929, in Malta in the middle of a brutal winter season. Her parents, Alfred and Alice Hendrickson, lived on a small farm about 14 miles to the south. Two weeks after her birth, Alfred built a shelter over the seat of his sleigh, loaded it with blankets and hot rocks and drove Alice and Elaine home over snow-drifted roads behind a two-horse team in sub-zero temperatures.

At an early age, Elaine learned how to play cards, drink coffee and play the piano. She always loved music, and farm community camaraderie helped Elaine develop a good wit and great sense of humor.

After graduating from high school and spending some time at college in Bozeman, Elaine returned to Malta. She got a job in the accounting office of the Ford dealership. It was while she was working there that she met a new Malta resident, a young newspaper reporter named Paul Verdon. They liked to tell their children that they met over a liverwurst sandwich, a food that Paul loved and Elaine hated. They were married in 1952.

Paul's career took them to Great Falls and Helena, but in 1960, they purchased The Western News, the weekly newspaper in Libby. Although Elaine was often busy managing their growing family, she was an active partner with Paul and after her children were in school, she spent many hours helping put out at the newspaper and handling much of the accounting at The Western News. They sold the newspaper in 1979 and moved to Helena the following year. Elaine worked for Hennessy's there but also spent many happy hours hunting for antiques and checking out Helena's garage sales.

Elaine and Paul travelled in their retirement years, but her true passions were her five children, their spouses and the grandchildren. She is survived by her daughter, Lexie Barr in Arlington, Virginia; Robert in Plano, Texas; Tim in Fort Worth, Texas; and Mike in Missoula, their spouses, three grandchildren, two great-grandchildren, a sister-in-law Eva Mae Hendrickson and her friend and caregiver, Marie Fowler. She was preceded in death by her parents; her husband, Paul; her son, Kenneth; and her brother, Russell Hendrickson.

Our family would like to thank all of the wonderful staff at Touchmark for their care of Elaine.

A memorial service celebrating Elaine's life will be held at 11 a.m. on Tuesday, October 19th at Anderson Stevenson Wilke Funeral Home, 3750 N. Montana Ave in Helena. Burial will follow the service at the Montana State Veterans Cemetery at Fort Harrison. Please visit www.aswfuneralhome.com to offer a condolence to the family or to share a memory of Elaine.