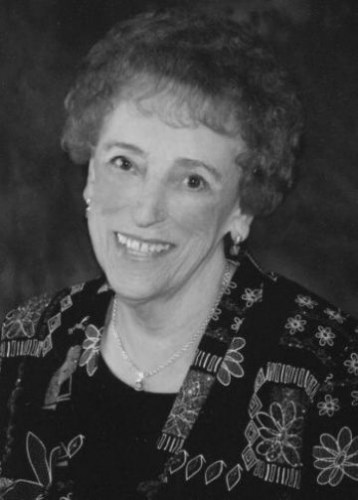 Funeral services for Evelyn M. "Sara" Engstrom, 94 of Sidney are at 2:00 P.M., Tuesday, September 7, 2021, at the Bible Baptist Church in Sidney with Pastor Michael Backhaus officiating. Interment will be in the Sidney Cemetery, Sidney, MT under the care of the Fulkerson-Stevenson Funeral Home of Sidney. Visitation will be Monday, September 6, 2021, from 10 AM to 1 PM at funeral home, Tuesday, September 7, 2021, from 10 AM to Noon, and one hour before services at the church. Remembrances, condolences and pictures may be shared with the family at www.fulkersons.com.

Evelyn was born on February 21, 1927 in Great Falls, MT. Her parents, Edward Henry Sara and Marie Louise (Meyer) Sara, were immigrants from England and Germany. They met in Elk Horn, MT where Ed was one of the miners and Marie taught school. Evelyn and her older brother, Eugene, spent their early years living in Butte, MT. After Evelyn completed first grade, the family moved to Marysville, MT.

Evelyn received Christ as her personal Savior when she was five years old. She heard the preacher at the Marysville Methodist Church talk about the clock of time and saying "every tick of the clock brings us closer to meeting the Lord - are you ready?" Back home, she asked her mother how she could know she was ready, and her mother told her to ask Jesus to forgive her and save her from the sinful nature we all are born with. Even though she would never be perfect on earth, she had a Savior!

When Evelyn was eight years old, she began to use her beautiful God-given gift of music in the local Methodist Church Sunday School in Marysville. She "took off" playing the piano "by ear" after having only a few piano lessons. That began a lifetime of serving the Lord at home and in local churches, youth ministries, in nursing homes and hospitals with her voice, piano, and accordion.

When it was time for Gene and Evelyn to attend high school, Ed Sara moved his family to Great Falls. There Evelyn met Audrey (Miller) Stephenson, and they became the best of friends for life. It was while accompanying the church youth group Christmas carolers with her accordion on the streets of Gt. Falls that she met the young man she would love for over 66 years. He was a Baker, MT native stationed in the Army at Gore Hill (Gt. Falls) in 1942. Evelyn whispered to her brother to invite the young soldier to their home for Christmas dinner. Gene and Richard Engstrom became lifelong friends. The love of the Lord and music drew Evelyn and Richard together over the next four years. They found great joy in singing duets together!

Evelyn graduated from Great Falls High School in 1944 and attended the College of Education in Great Falls with one term at Carroll College in Helena to become a teacher. Because of the need for teachers during war time, Evelyn was asked to teach in a country school south of Great Falls before finishing her degree.

Evelyn married Richard H. Engstrom on September 14, 1946, at the Assembly of God Church in Great Falls, MT. They spent the first few years of married life in Baker, MT, where their daughter, Anita Marie, was born on April 4, 1949. As members of First Baptist Church in Baker, they traveled eastern Montana and western North Dakota providing the music for Pastor Arthur Allen at Youth For Christ meetings.

In the fall of 1949, Richard moved the family to a ranch in Clancy, MT. During the 14 happy years there, three sons were born to them: David Eugene on December 25, 1950; Richard Edward on April 9, 1953; and Eric Alan on June 16, 1959. In August 1961, after a forest fire destroyed the grazing land for their cattle in Clancy, the family moved to a ranch in the Helena Valley.

Evelyn loved raising her children in the country - she played with them and taught them (by example) the joy of hard work. She made sure they did their schoolwork, went to church and Sunday School, and had music lessons. If not busy cooking for her family, extended family and the hired ranch hands, she was at the piano practicing a special number that would be sung at church. Many a Sunday she invited company to dinner after church. She made the best homemade rolls ever! All of her children are thankful that their mother taught them about the love of God, and about salvation by faith in Jesus Christ. We will meet again!

Two years after the tragic death of her youngest son, Eric, (1966), Evelyn began a new career as secretary for the Federal Aviation Administration at the Helena Airport in 1968. After 25 years working for the FAA in the air-traffic control tower, Evelyn retired in 1993. She always missed the men and women with whom she had worked and kept in touch with many of them.

After retirement, she and Richard moved to Sidney, MT, to be near their daughter. They did some traveling to visit family in the states and especially enjoyed the trip of a lifetime to Sweden to visit Richard's cousins. In September 2011, Richard and Evelyn celebrated their 65th wedding anniversary.

Evelyn was a member of Bible Baptist Church in Sidney where she served as pianist and helped with special music. After Richard's death in 2012, she lived in her own home - the last two years with the help of homecare. During that time, she had the joy of being reunited with her deceased brother's grandson, Ken Wanlass, and telling him all about his grandfather, Eugene. Evelyn moved into SHC Extended Care in January 2020. She appreciated those who helped her and came to love many of her caregivers!

On August 26, 2021, Evelyn M. (Sara) Engstrom completed her earthly journey while in St. Vincent Hospital in Billings, MT. Her body got tired, and she quietly left to be with her Lord Jesus Christ when He called.

Published by Helena Independent Record on Sep. 9, 2021.
To plant trees in memory, please visit the Sympathy Store.
MEMORIAL EVENTS
To offer your sympathy during this difficult time, you can now have memorial trees planted in a National Forest in memory of your loved one.
Funeral services provided by:
Fulkerson Stevenson Funeral Home - Sidney
MAKE A DONATION
MEMORIES & CONDOLENCES
Sponsored by Fulkerson Stevenson Funeral Home - Sidney.
1 Entry
To Anita, David and family, My deepest sympathy in the loss of your mother. I have such wonderful memories of after church picnics at your place in Clancy. Your Mother was so soft spoken and such a lovely lady. She will be remembered for her service to the Lord.
Joan Applegate Sieler
September 11, 2021
Showing 1 - 1 of 1 results