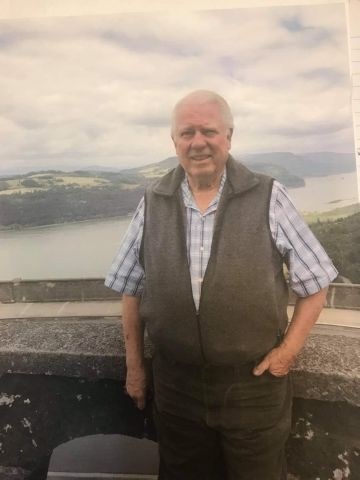 James E. Krieger passed away September 2, 2021 in Portland, Oregon of heart failure. Jim was born October 11, 1936 in Helena, Montana to Samuel C. and Katherine B. Krieger. Following Jim came siblings Arthur and Eileen. As young children, they loved to play on Moccasin Flats with their cousins, the Lakes. They often spent time at the family ranch at the Gates of the Mountains.

Jim graduated from Helena High School in 1956. Jim had a love of cars and motorcycles and became interested in racing both. He served in the Montana National Guard and the US Army Reserve. On July 3, 1958, he married the love of his life, Donna Kay Halverson, in Helena. Together they had three children, Christy, Mark and Brad. In 1968, the family moved from Montana to Portland, Oregon. Jim loved camping, beach trips, motorcycling and fishing with his family and friends. Jim's love of cars led him to his career as an automotive technician specializing in Volkswagen, Audi and Porsche. His son Mark was fortunate to work with him for over ten years.

During early retirement, Jim and Donna travelled with friends and family to Hawaii, Alaska, Australia and the western US, along with many trips to the beach. After Donna's death in 2004, Jim found friendship in a local coffee group and they became an important part of his daily life. He enjoyed motorhome trips with his coffee friends and bluegrass festivals.

Jim was preceded in death by his parents, his brother Art, his dear wife Donna, and his sister Eileen. Survivors include daughter Christy (Ron) Arnold, sons Mark (Lisa) and Brad, grandchildren Grant, Whitney, Elisabeth, Christina, and Matthew, and great grandchildren Ava and Lyra.

Services will be held at 10am Friday, September 10th at Rose City Cemetery in Portland, Oregon. In lieu of flowers, please consider a donation to the nonprofit organization, Tunnel to Towers.

Funeral was held on Friday, September 10, 2021 at Rose City Cemetery and Funeral Home in Portland Oregon.