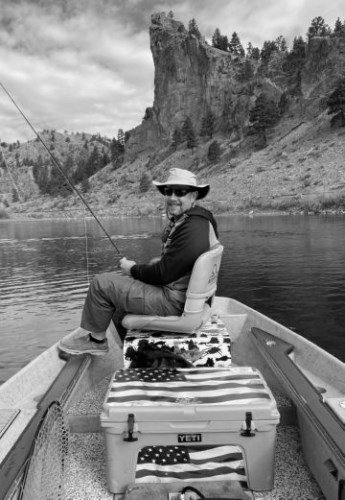 James "Jim" Allen Winkle was called home to see Jesus after many hard-fought years of battling cancer on Thursday, October 7th, 2021 with his wife Kim and kids McKinley and Chayton by his side.

James was born to Donald and Peggy Winkle on April 27th, 1963 in Fort Benton, Montana and was raised in Great Falls, Montana.

There are no words that can begin to describe how incredible of a man James was and how much he loves and is loved. He was and is an amazing father, husband, son, uncle, and friend.

James and Kim had the chance to celebrate their 30th wedding anniversary as of August 30th this year, which was a milestone he was so happy to reach. Since James has been sick, he set goals of what he wanted to see accomplished, and he was so proud of his family and loved them dearly. He wanted to make it to his 30th anniversary, see Chayton graduate high school and start playing college football, and to see McKinley graduate college and be settled with a good job and happy life, and he fortunately met everyone.

James enjoyed many things in this life, too many to count, and cherished his family and the outdoors. In his younger years, James enjoyed his time around Steamboat Mountain out by Augusta and carried his love of the great outdoors on throughout his life. He enjoyed fishing, hunting and snowboarding which are passions he shared with his kids. A couple of his favorite recent activities were boating on the lake with his family, and then coming home to cook on his pit boss and share recipes with his buddies.

James loved to watch and be a part of McKinley and Chayton's sporting events or anything else they were involved in. James was the President of the 2021 Capital High Bruin football class, and sat on the board for Westside Football. In Chayton's younger years, he coached small fry football alongside some of his best friends.

In addition to his love of the outdoors, sports, and spending time with his wife, kids, and family dogs, James also picked up several hobbies over his lifetime. James loved to play guitar, which was something passed onto him from his dad. He used to help lead worship services while his kids were young, playing guitar and singing hymns. You could often find him learning new songs, or playing some of his favorites. James also received his license in massage therapy during the time he and his family lived in Missoula, Montana, and practiced at the School of Massage, and often volunteered at Camp Mak-A-Dream. James was also a boxer in his youth and as an adult, practiced martial arts and it was something he loved to do and wished he could've stuck with despite his health. James also loved motorcycles and was thrilled to have one of his own after it being just a dream.

James held a handful of different jobs in his lifetime including cutting trees when he was a teenager, working at Kenworth Trucking Company in Missoula for many years, and his career as a massage therapist, but serving his country wasn't just a career, but rather a deep calling. James is a retired veteran and serving his country is something he loved, cherished and held close to his heart. He first served in the Navy and spent time overseas in the Philippines, Japan, Australia, and many other countries. When he was with the Army National Guard, he served in Iraq from June 2004 through November 2005, and always wished he could go back for a second deployment.

He is survived by: His wife Kim and kids McKinley and Chayton, his mom and dad Peggy and Don Winkle, sister Vicki Turnbull and her husband Richard, brother Martin Winkle, his in-laws Don and June McConahy, brother in-law Joshua McConahy and his wife Amanda, sister-in-law Hadley Heater and her husband Lucas, and several nieces and nephews.

James's service will be held Thursday, October 21st, 2021 at 11:00am at the Montana State Veterans Cemetery at Fort Harrison. There will be a reception to follow at the service club to honor and celebrate his incredible life.

We want to thank the nurses at the St. Peter's Cancer Treatment Center and Dr. Tom Weiner for all their love and care over the years. We also would like to thank all the St. Peter's ICU nurses and doctors who cared for James and our family the night of his passing as well as the nurses and doctors on the oncology floor, and nurse Robyn from same day surgery. Thank you to Anderson Stevenson Wilke Funeral Home for making this transition comforting and guiding us through this time. Last but definitely not least, thank you to all our family and friends who have loved us during this difficult time. We love and appreciate you all so much.

We ask that memorial donations in James's name be made to the following organizations that were close to his heart: Camp Mak-A-Dream, Relay For Life, and Wounded Warrior Project. Please visit www.aswfuneralhome.com to offer a condolence to the family or to share a memory of James.

Published by Helena Independent Record on Oct. 17, 2021.
To plant trees in memory, please visit the Sympathy Store.
MEMORIAL EVENTS
Oct
21
Service
11:00a.m.
Montana State Veterans Cemetery
Fort Harrison, MT
Funeral services provided by:
Anderson Stevenson Wilke Funeral Home & Crematory
MAKE A DONATION
Please consider a donation as requested by the family.
MEMORIES & CONDOLENCES
Sponsored by Anderson Stevenson Wilke Funeral Home & Crematory.
2 Entries
Always a pleasure to talk with James. Condolences to his families and friends. A big Thanks to the family for serving along with James as he served and sacrificed for our Country.
Stubby Williams
Work
October 19, 2021
Your kind mannerisms with the boys when you coached football will live for many years. Adam has grown up to be a great lineman and he speaks highly of his years with Bobs Valley Market. My condolences to the family and friends.
Ron Weber
Friend
October 15, 2021
Showing 1 - 2 of 2 results