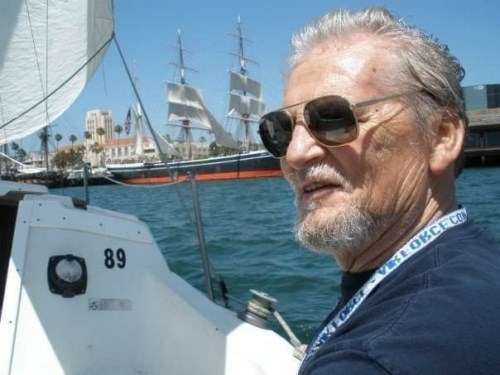 Royal Stapleton Magnus was born in Helena, Montana on January 16, 1939 to a working class family. A few years later because of divorce, Royal moved with his mother to Walla Walla, Washington. While his mother worked, Royal lived with Great Aunt Alice Barrow and she became a great influence in his life. His family moved a few more times. When Royal finished high school in Tacoma, he joined the Navy in 1957 and became a hospital corpsman, serving with the Marines and then on a diesel submarine.

Eight years later, he was chosen for Officer Candidate School and became a Navy officer. While stationed in Hawaii, he married Frances Ann Bouvette and they welcomed a son, Gregory Scott Magnus on January 16, 1971 born in Newport, Rhode Island. The Navy life involved many moves. Ann and Greg lived in Guam while Royal was Commanding Officer of USS Tacoma, a patrol gun boat. During that time Royal and his crew during a fierce storm at sea, rescued another Navy ship whose engines were flooded with storm water and got them safely to port. This earned him The Bronze Star.

As the years passed, Royal and Ann parted ways. Following many more Navy adventures, Royal was Engineering Officer of Cruiser Destroyer Group 5 in San Diego. While there he met and married Marcia Moudree. Royal retired in 1984 as a Commander in the US Navy. He then obtained a masters and later a doctorate degree in organizational psychology. He and Marcia were blessed with Jessica Lynn Magnus in 1987 and Zane Gregory Magnus in 1991.

Royal with two others founded El Cajon CASA, an organization dedicated to substance abuse prevention in the eastern suburb of San Diego called El Cajon. After raising their family, Royal and Marcia returned to beautiful Montana in 2015.

Among his lessons were a love of the water and any vessel that floats on it, especially ones that sail on it. All who knew him know to bring a life jacket when near the water, and to have a flashlight by every door of the house, and in one pocket at all times.

He will be remembered as a sailor, a pilot, a wrestler, a relentless joke teller, a friend to those needing a second chance, a lover of hospitality, and giver of a thousand life lessons that often mirrored Solomon's Proverbs.

"You are never more wrong than when you're wrong at the top of your voice."

"If you can't explain your thoughts without swearing, it's a sign of a weak vocabulary."

"Don't ask me what a word means, look it up in the dictionary. While you're there, look up the word above it and the word below it."

"…And that's how the Baby Ruth bar makes me think of all the good God has done in my life."

"Your attitude affects your altitude."

"Question authority; don't challenge it. That's the only reason I didn't retire as an admiral. I would have had a way better pension."

Please visit www.aswfuneralhome.com to share a condolence to the family or to share a favorite memory of Royal.