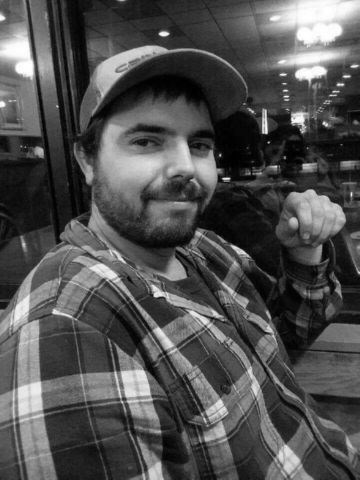 On October 3, 2021, Zachary Thomas Fowler was swooped up by the arms of an angel and brought home. His last day was spent with family until his very last breath, leaving our family circle broken. Zach had finally accomplished his dream of a bull moose in the Boulder Valley. With his kinder spirit, bravery, and love for his family, he turned the car so he would take the full impact, giving his family a chance to live on and carry his memory. Growing up, he was part of the Clancy Kids Forever. He spent his summers, playing baseball, fishing, collecting sheds and getting into mischief.

He had a passion for food and designated himself as the Barbecue King. After receiving his diesel degree at Wyo Tech in 2013, he went to work for Summit Utilities. Throughout his travels, he acquired many dear friends. Zachary home was the backwoods, hunting, fishing, and making memories with his four legged child Taz. He spent countless hours with his brother William and many family and friends finding his trophy muley, fly fishing, and shed hunting. Every spring, he grew with excitement to join the Foster Ranch Branding Crew and bringing many stories home to tell. These events brought back memories of his childhood with his grandparents on the farm. When he was not in the mountains, he was with his sister Kat goofing around and sharing memories. There never was a dull moment at the York Bar, with a cold beer in his hand and his best friend Kody Kottas and others by his side.

Zach leaves behind many who loved and adored him. He is survived by many of these individuals including his beloved son Taz (his Doberman), Parents Keith and Melva Fowler, Grandparents Don and Mary Ragsdale, Grandma Shirley Rogers, Brothers Rudy (Danielle) Fowler and William (Candace) Fowler, Baby Sister Kathryn Fowler, and life time Best Friends Kody Kottas, Hunter Demers, and Derek Teague, along with numerous Aunts, Uncles, Cousins, Nieces, Nephew, and Friends.

A memorial service celebrating Zach's life will be held at 11 a.m. on Monday, October 11th at JFK Park in East Helena. Private family burial will take place at a later date. Please visit www.aswfuneralhome.com to offer a condolence to the family or to share a memory of Zach.

Published by Helena Independent Record on Oct. 8, 2021.
To plant trees in memory, please visit the Sympathy Store.
MEMORIAL EVENTS
Oct
11
Memorial service
11:00a.m.
JFK Park
East Helena, MT
Funeral services provided by:
Anderson Stevenson Wilke Funeral Home & Crematory
MAKE A DONATION
MEMORIES & CONDOLENCES
Sponsored by Anderson Stevenson Wilke Funeral Home & Crematory.
2 Entries
On behalf of the US Coast Guard Sea Veterans of America, we extend our deepest condolences to our Shipmate, Don "Rags" Ragsdale, during this difficult time. All our thoughts and prayers go out to Don and the family, Grandson Zachary's family.
John Estep
Other
October 9, 2021
We are so sorry for your loss. Our prayers are with you.
Randy and Marilyn Buck
October 7, 2021
Showing 1 - 2 of 2 results