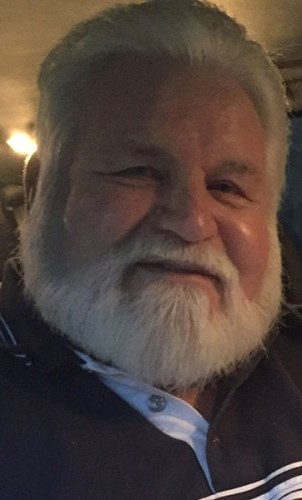 JAMES "EDDIE BOY" EDWARD CLARY, 75, of Glenwood, W.Va., passed away April 3, 2020. He was born June 19, 1944, in Cabell County, a son of the late Edgar and Oweva Mount Clary. He was a retired employee of Steel of West Virginia, and was a veteran of the United States Army and served in the Vietnam War. He was also preceded in death by his brother and sister-in-law, Carl and Shirley Clary, and his brothers-in-law, Ed Scott and Darren Clagg. Eddie Boy is survived by his loving wife of twenty years, Melba Clagg Clary; daughter, Natalie "Sis" Adams of Glenwood, W.Va.; son and daughter-in-law, David "Daveyson" and Sarah Washington of Glenwood, W.Va.; sisters and brothers-in-law, Wunita and David Riggle of Glenwood, W.Va., Mary Ann Scott of Glenwood, W.Va., and Doris and Wesley Morrison of Lesage; brothers and sisters-in-law, Louie and Leca Clary of Glenwood, W.Va., and Rick and Penny Clary of Lesage, Denzil and Karen Clagg of North Carolina, Dana and Cristy Clagg of Lesage, David and Kay Ward, Sanford, N.C., and Roy and Melissa Shull, Milton; grandchildren, Austin "Baby Boy" McClure and D.J. "Bubby" Washington. Due to the health pandemic, there will be no services at this time. Services will be held at a later date. Wallace Funeral Home, Barboursville, is assisting the family. Online condolences may be expressed to the family at www.timeformemory.com/wallace.

Published by The Herald-Dispatch on Apr. 5, 2020.
To plant trees in memory, please visit the Sympathy Store.
MEMORIAL EVENTS
To offer your sympathy during this difficult time, you can now have memorial trees planted in a National Forest in memory of your loved one.
Funeral services provided by:
Wallace Funeral Home - Barboursville
MAKE A DONATION
MEMORIES & CONDOLENCES
Sponsored by Wallace Funeral Home - Barboursville.
12 Entries
We love you and know you are in a better place. Prayers for the family
Jess and Josh
April 13, 2020
R.I.P
April 10, 2020
He will be missed.
Rusty & Connie Gray
Friend
April 8, 2020
Sorry for the loss! Thoughts and prayers for the family. Eddie boy will be surely missed.
Debbie Mount Wolfe
Family
April 8, 2020
Melba,
My deepest sympathies for the loss of your soulmate, Eddie Boy. May you find peace in knowing he is at rest with our Lord & Savior! Lean upon the Lord through your hours of sorrow. With Love & Prayers,
Marsha & Ricky Adkins
April 6, 2020
Sending Everyone PRAYERS...So Sorry for Your Loss.....
Shirley Bowman
Friend
April 5, 2020
So sorry to hear about this! We wish the best to the entire family. Ron & Kelly Rider
Ron Rider
April 5, 2020
So very sorry for your loss. May you all find Peace in the knowledge of knowing he is with Our Lord. God Bless You All❣
Cindy & Rick Brinkley
Friend
April 5, 2020
I love and miss you uncle Eddie!!!
Tanya Paul
Family
April 5, 2020
Melba, So sorry to hear of Eddie Boys passing. He is walking the streets of gold now. Love and prayers to you.
Terri and Joe
Wolowinski
Terri Wolowinski
Friend
April 5, 2020
In loving memory of a wonderful person. We will love you and miss you always.
Tiffany Mace
Family
April 4, 2020
I will miss you Uncle Eddie. Love , Your niece Tiffany.
Tiffany Mace
April 4, 2020
Showing 1 - 12 of 12 results