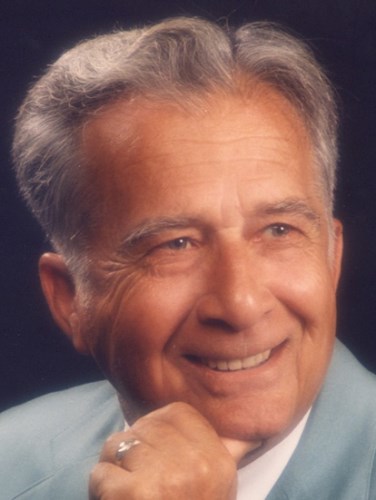 
LEWIS GRIFFIN, 88, of Chesapeake, Ohio, died Tuesday, November 4, 2014, at his residence. Funeral service will be noon Friday, November 7, 2014, at Schneider-Griffin Funeral Home with Pastor Tim Jenkins officiating. Burial will follow in Rome Cemetery, Proctorville, Ohio. Lewis was born August 19, 1926, in Lumberton, N.C., a son of the late Roy Harry and Maggie Allen Griffin. He was a retired insurance agent with Western-Southern Life Insurance, owner of Griffin Insurance Agency in Chesapeake, Ohio, a former Chesapeake Village Council member, and a member of the organization committee for the Chesapeake Volunteer Fire Department. Lewis was a Coxswain in the U.S. Navy during World War II serving in England and received the European African Middle Eastern Campaign Medal and the WWII Victory Medal. In addition to his parents, he was preceded in death by his wife of 69 years in September, Pauline Evelyn Reynolds Griffin; two brothers, Roy Harry Griffin, Jr. and Marvin Griffin; and one sister, Mary Griffin. Lewis is survived by his two sons and daughters-in-law, Lewis "Butch" and Janet Griffin of Blacklick, Ohio, and Terry and Linda Griffin of Chesapeake, Ohio; six grandchildren, Stephanie (Pat) Pare of Liberty Township, Ohio, Stephen (Angie) Griffin of Lewis Center, Ohio, Suzanne (Tim) Bush of New Albany, Ohio, Drew (Nikki) Griffin of Chesapeake, Ohio, Shannon Griffin of New York City, N.Y., and Cortney (Nick) Robateau of Huntington; 12 great-grandchildren; and one sister, Margaret Finnicum of Gallipolis, Ohio. Visitation will be from 11 a.m. to noon Friday at Schneider-Griffin Funeral Home, Chesapeake, Ohio. In lieu of flowers, please make contributions to Hospice of Huntington, 1101 6th Ave., Huntington, WV, 25701. Condolences may be expressed to the family at www.schneidergriffin.com.
Published by The Herald-Dispatch on Nov. 6, 2014.
To plant trees in memory, please visit the Sympathy Store.
MEMORIAL EVENTS
Nov
7
Visitation
11:00a.m. - 12:00p.m.
Schneider-Hall Funeral Home
313 Big Branch Rd, Chesapeake, OH
Funeral services provided by:
Schneider-Hall Funeral Home
MAKE A DONATION
MEMORIES & CONDOLENCES
Sponsored by Schneider-Hall Funeral Home.
6 Entries
Had so much fun with your mom and dad when I lived in Chesapeake. Sorry for your loss. Watched you grow into fine young men.
Pat Gillen
November 8, 2014
Drew, sorry for the loss of your parents, You were so kind to may family when we lost Mom @ Dad. I can remember your Dad coming to our house to collect the insurance and he and Dad would set and talk and laugh. That has been a number of yrs. ago. My prayers will be with you.
Jane Deeds
November 7, 2014

Drew so sorry for your loss of your Mother and Dad j.wylie
November 7, 2014
Pickles, Im so sorry to read of Lews passing. I 1st met him when I worked at Chesys. He was a very sweet man. Hes with his beloved wife now, in Heaven. I will say a prayer for you & the rest of the family. Please accept my deepest sympathy.
Joyce (Drummond) Ferguson
November 7, 2014
My condolence for your loss. May you find comfort and peace in the word's at 2nd Thessalonias 3 : 16. Diane.
November 6, 2014
To the Griffin family. I am so sorry for your loss. He is was always so nice to me when I was growing up in Chesapeake.
Debbie Bennett O'lynn
November 6, 2014
Showing 1 - 6 of 6 results