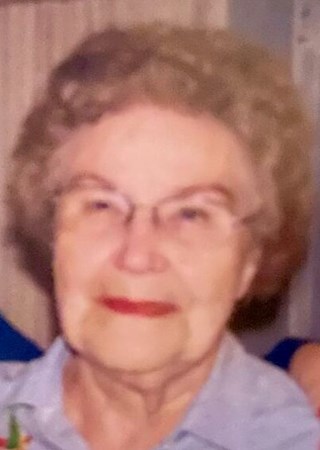 MT. ZION - Esther J. McEvoy of Mt. Zion, IL, our dear mother and grandmother, passed away December 20, 2020. Esther was born in Ford City, Pennsylvania, on June 23, 1924 to Clarence Frederick and Jennie Rose Burdett. She was the seventh born of eight children. Esther had a happy, idyllic childhood, growing up in a large family. Many of her aunts, uncles, and cousins lived only a door or two away. Esther's family spent summers at their family camp in the nearby hills. She played, explored, and learned to have a great appreciation of nature. Esther graduated from Ford City High School in 1942, when many of her classmates joined the war effort during World War II. Because she was an excellent math and science student, she was recruited by Pittsburgh Plate Glass (PPG) to work in the laboratory of the Ford City glass plant.

She married Richard J. McEvoy, the love of her life, on May 28, 1949. He was the handsome and brave Army Air Corps soldier, who just happened to live on the opposite corner of her block. They were married for 55 years and raised three children.

In 1960, Esther and Richard moved the family to their home in Mt. Zion, IL. Her family was her greatest joy. Esther so loved having her home packed with children and grandchildren for large family celebrations. Esther was creative, artistic, loved to read, and she was very patriotic. Esther and Richard loved to travel, visit with family, fish for crappie in their boat, attend any event of their grandchildren, and they were enthusiastic ballroom dancers. Esther retired from the Mt. Zion Post Office where she worked as a clerk-carrier. She was a member of the Moose Lodge and the Mt. Zion Presbyterian Church.

She was preceded in death by her parents; husband; brothers: Clyde, Clair, Lloyd and Jack Burdett; and sisters: Edna Faulx and Elsie Hartman.

The family would like to express their thanks to Dr. John DiMondo for the love and care he gave to our mother over all the years.

A private family service will be held at the Mt. Zion Township Cemetery. Dawson & Wikoff Funeral Home, Mt. Zion is assisting the family with services. Memorials may be made in Esther's memory to the Mt. Zion Presbyterian Church, P.O. Box 199, Mt. Zion, IL 62549. Messages of condolence may be sent to the family and viewing of her recorded service at dawson-wikoff.com.

To plant trees in memory, please visit our Sympathy Store.
Published by Decatur Herald & Review on Dec. 26, 2020.
MEMORIAL EVENTS
No memorial events are currently scheduled.
To offer your sympathy during this difficult time, you can now have memorial trees planted in a National Forest in memory of your loved one.
Funeral services provided by:
Dawson & Wikoff Funeral Directors - Mt. Zion
GUEST BOOK
Sponsored by Dawson & Wikoff Funeral Directors - Mt. Zion.
0 Entries
Be the first to post a memory or condolences.