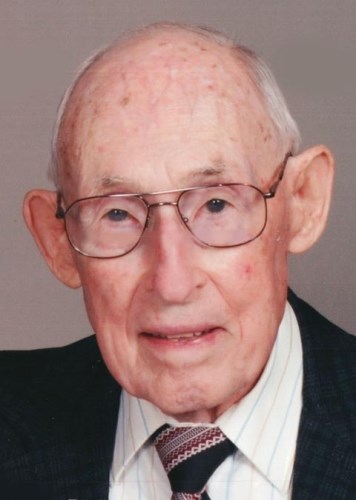 FORSYTH - James Elliot "Jim" Stephens, 96, died peacefully in his sleep on September 10, 2021 at his home in Forsyth.

Jim was born in 1924 in Iowa, the first son of Milton Hugh Stephens and Goldie (Barnes) Stephens. Jim's brother Russell was born in 1926. In 1929, the family moved to Peoria IL, where Jim's father was a teacher at Peoria High School.

In the fall of 1942, Jim started Electrical Engineering at the University of Illinois. However, in March 1943, the U.S. Army called and Jim spent the rest of 1943 in Army training. Jim then spent the next two years doing airborne radar maintenance at Elmendorf Air Field near Anchorage, AK, reaching the rank of Staff Sergeant.

In September 1946, Jim returned to the U of I and graduated in 1949 as an Electrical Engineer. He met Frances Ann McCorkle at the U of I and they were married on January 30, 1949.

Jim was employed by Illinois Power Company for 40 years, serving as an Electrical Systems Protective Engineer most of that time. In 1957, Jim and his family moved to LaGrange Park, IL for a one-year assignment with the Nuclear Power Group Study Team. Illinois Power was one of eight companies researching nuclear power and contributing to the R&D for the Dresden Nuclear Power Plant, the first privately owned nuclear plant in the U.S.

Jim was a member of the National Society of Professional Engineers, the Institute of Electrical & Electronic Engineers, the Power Systems Relay Committee of the IEEE, and First United Methodist Church in Decatur.

In retirement, Jim and Frances enjoyed traveling. They visited all 50 states as well as Australia, New Zealand and several countries in Europe. Jim also enjoyed gardening, recycling, woodworking, doing electrical and mechanical maintenance projects, volunteering at his church, and delivering Meals-On-Wheels every Wednesday.

Jim is survived by his wife, Frances; his two sons: Michael (Dounia), of Forsyth, IL and David (Linda), of Stevenson Ranch, CA; one granddaughter, Mollie Shea, of St. Louis; one grandson, Matthew (Mandy); and two great-grandchildren: Tucker and Lucy, of Hoover, AL; as well as one niece; two nephews; and several cousins.