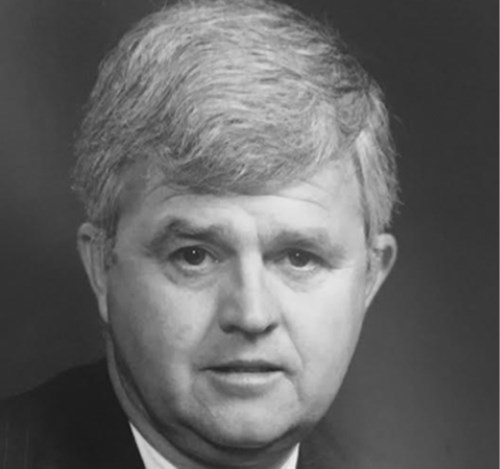 BORN
1940
DIED
2017
FUNERAL HOME
Stanfill Funeral Homes
10545 South Dixie Hwy.
Miami, FL
THORNBURG, FREDERICK F. "BUCK" age 77, passed away peacefully and surrounded by family at his home on Tuesday, September 19th, 2017. He was born February 10, 1940 in Mishawaka, Indiana to James Fletcher Thornburg and Margaret Major Thornburg. He leaves behind his beloved wife Patricia Malloy Thornburg, and four children: Dr. James Brian Thornburg, Christopher J. Herndon, C. Kevin Thornburg and Christian Sean Thornburg, as well as 14 grandchildren who he dearly loved. His sister and brother-in-law, Karin and William Brown, and brother and sister-in-law, James O. Thornburg and Mary Dunbar, also survive him. Funeral services will be held on Sunday, September 24th from 2-4 pm at Stanfill Funeral Home located at 10545 South Dixie Hwy in Miami, FL. Burial will take place at Highland-Riverview Cemetery in South Bend, Indiana. Buck's career history and contributions to the community left a distinguished mark in the fields of law, industry and academia. He was a member of the Phi Gamma Delta Fraternity and graduated from DePauw University with a B.A. in Economics and immediately after served two years as a teacher and coach in Colombia South America as a Peace Corps volunteer. Thereafter, he continued his educational endeavors as an honor student at the graduate school of economics and finance at the University of Notre Dame and then graduated from the Indiana University School of Law with a Doctor of Jurisprudence, Magna Cum Laude. While in law school, he was admitted into the Order of the Coif, held the Charles Halleck Scholarship, and was elected Associate Editor-in-Chief of the Law Journal. After being appointed as the Law Clerk to the late Chief Judge of the United States Court of Appeals in Chicago, the Honorable John S. Hastings, Buck then practiced law for several years as an associate and partner with the multistate law firm Thornburg, McGill, Deahl, Harman, Carey and Murray (on merger renamed Barnes and Thornburg). Transitioning into the corporate world, he served on the Board of Directors and was the Executive Vice President and Chief Administrative officer of The Wackenhut Corporation, a multinational New York Stock Exchange company that had operations in 66 countries and had approximately 88,000 employees worldwide. As Buck retired from the business world, he focused on academia where he served as the Vice President of Institutional Advancement and General Counsel for St. Thomas University where he successfully directed the University's legal affairs and managed the rebuilding of its athletic, development, alumni and public relations departments. While there, he increased contributions by 1,000% and formed a University advisory board comprised of 43 civic, business and religious leaders. Upon retirement, Buck remained active in his volunteer efforts and was honored for 15 years of service to the Miami-Dade County School System. His service included chairing the budget and finance committee for several years and serving on it for more. He also chaired the Ethics Committee during a period of investigations of the school system and served as the Vice Chair of the Citizens Advisory Board for the South Florida-based PBS radio and television stations. Most importantly, Buck felt that retirement allowed him to spend time with his wife and large brood of children and grandchildren. Above all, they are his greatest and enduring legacy. In lieu of flowers, the family asks that donations be made to St. Jude Children's Research Hospital. For more information go to StJude.org/donate or call 800-805-5856.
Published by the Miami Herald on Sep. 23, 2017.
To plant trees in memory, please visit the Sympathy Store.
MEMORIAL EVENTS
Sep
24
Funeral service
2:00p.m. - 4:00p.m.
Stanfill Funeral Homes
10545 South Dixie Hwy., Miami, FL
Funeral services provided by:
Stanfill Funeral Homes
MAKE A DONATION
MEMORIES & CONDOLENCES
7 Entries
Bucky was my best friend growing up. Fun times, fond memories. Hope to see you in the future. Denny Wolter
Dennis Wolter
September 16, 2021
I served with Bucky in the Peace Corps in Cucuta, Colombia. He was a gentle soul. Abrazos, mi amigo. Que le vaya bien.
Tom Kolodz
February 22, 2020
We are sorry to hear of the passing of Frederick, but grateful for his service to our nation with the Peace Corps in Colombia.

Our Condolences,
The National Peace Corps Association
September 26, 2017
My sincere condolences to Jim and all of "Bucky"s family and friends. Keep each other close in good memories and love.
Tim Thilman
September 25, 2017
My sincere sympathy and concern to the Thornburg family. I was shocked to read in the South Bend Tribune about "Bucky"'s death. I graduated from IU Law with Bucky and we started the practice of law in South Bend at the same time. His life/career obviously had a positive impact on many and benefited those he worked with/for in many ways. May his surviving family be sustained by the many memories of times together as well as by the care and concern of each other and those who knew him. Peace to all of you.
Harold Brueseke
September 23, 2017
Bucky was my first real buddy as we grew up together in Mishawaka.
Many fond memories of playing together cementing our friendship. How devastating then to learn that Bucky was moving to South Bend!
We were determined to maintain our friendship and devised a plan whereby we would each ride our bikes and meet halfway. Interfering parents put the kibosh on that idea . . . . . too adventuresome and dangerous. We did, however, visit each other from time to time. As so often happens we became disconnected.
There must have been something in Mishawaka's drinking water as we followed similar paths . . . . Notre Dame, law school etc. I'm sure
Bucky's legacy is a source of pride to his family and gratitude from the community. My sincere condolences to the family. RIP, Bucky and keep your bike in good condition.
Denny Wolter
September 23, 2017
Karin and family, deepest sympathy on the passing of this remarkable dear of yours. I remember meeting him soooo many years ago. Joyful memories are a wonderful and mysterious gift.
Gwen Clarke
September 23, 2017
Showing 1 - 7 of 7 results