Brady Hammer
Brady James Hammer, 24, residing in El Paso, Texas, went to meet his maker July 28, 2013.
He made his grand entrance into this world Feb. 26, 1989, in Klamath Falls, Ore. From the beginning, it was evident that he had a strong spirit.
While still in high school, he enlisted in the military with the Army National Guard at the age of 17. In 2009, he was deployed to Iraq with C Troop 1-82nd Cav Squadron Operation Iraqi Freedom 2009-2010. He also served as a Wounded Warrior at Fort Bliss, El Paso, from 2011-2013. During the seven years Brady spent serving his country, he formed many bonds with his brothers in the armed forces.
He was known for his generous heart and amazing ability to make people laugh. He was a district bowling champion while in high school and when home on leave enjoyed Monte Carlo Bowling with family. He loved to put his mom on the phone while he sang her karaoke. He also enjoyed shooting guns, playing his guitar, dancing, country music and spending time with the people he loved.
Brady is survived by his mother Marie Hammer of Klamath Falls; his sisters Kayla King (Korey) of Oregon City, Ore., and Lacee Valentine of Grants Pass, Ore.; nephew Lucas Handley of Grants Pass; grandparents James Hammer and Sharon Hammer, both of Klamath Falls; several aunts, uncle and cousins; and many other family members and comrades of significant importance in his life.
He was preceded in death by his Aunt Christine Powell, his cousins Johnathan and Wade Hammer and great-grandparents.
Services will be at 2 p.m. Saturday at Veterans Memorial Park in Klamath Falls.
We would like to send a special thank you to Jason Ward for helping us in this time of sadness.
Please sign the online guest book at www.heraldandnews.com/obituaries.

Published by Herald And News on Aug. 13, 2013.
To plant trees in memory, please visit the Sympathy Store.
MEMORIAL EVENTS
To offer your sympathy during this difficult time, you can now have memorial trees planted in a National Forest in memory of your loved one.
MAKE A DONATION
MEMORIES & CONDOLENCES
67 Entries
Not Forgotten Here!!
www.iraqwarheroes.org/2013/hammerbj.htm
Q Madp
May 10, 2014
Missing you everyday.
Marie Hammer
November 4, 2013 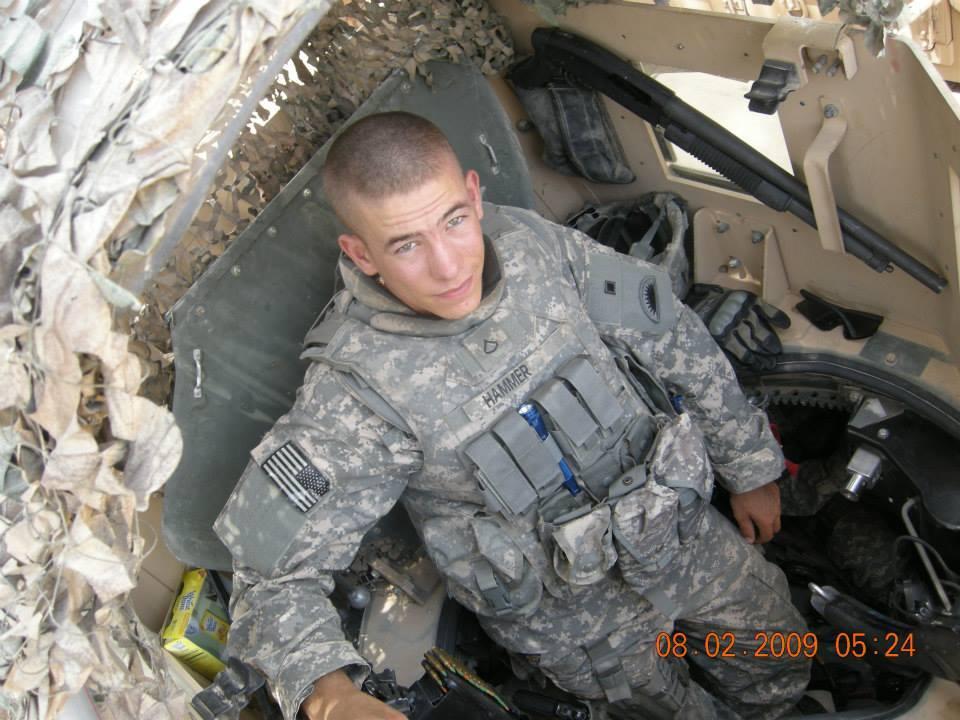 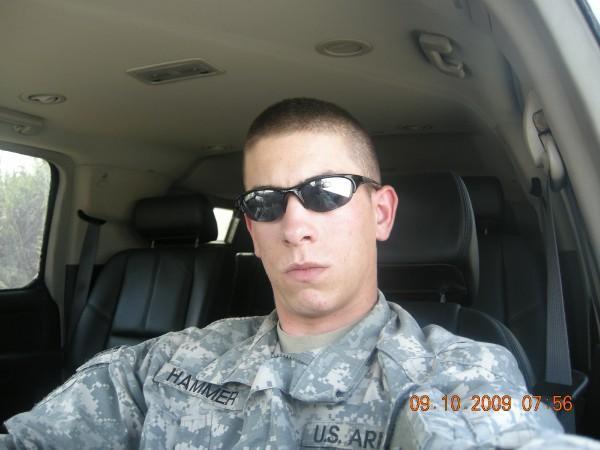 September 22, 2013
Brady James , I can't believe your gone I wish I could just pick the phone up like I use to n call you , you were a big part of my life for so long ..... I love and miss you and your big ole Copenhagen grin and I'll see you again one day until that day I'll be lookin up to the sky's
Chelsea Ervast
September 12, 2013
Always the one to make you smile when you needed it. I'll never be able to make drop cookies with out remembering you
Ashley Parks
August 21, 2013
Brady was my best friend understood my struggles as ad I understood him never judging always making me laugh. Putting us all at ease. I will miss you ky dear friend
meagan christain
August 19, 2013
Brady I will never forget coming off the plane from basic and AIT and seeing you and my brother in uniform to welcome me back home and driving around the woods the rest of the night because I couldn't sleep. I miss you so much and love you even more. From one soldier to another my salute goes out to you, you have paid the ultimate price. RIP SPC Hammer
Stacy Tiede (Farris)
August 18, 2013
Rest in peace Brady
Brian Fike
August 17, 2013
Brady was one of and will always be my best buds i have missed ou this whole month but i feel you when i am at little bit and i even wrote a new single for you buddy i know you never got to hear my first one but you her them all the time Big Country miss you and my deepest condulences to the hammer family
Jason Johnston
August 17, 2013
Brady, you were such an amazing person. Will be missed by many. We will all see you soon :)
Caitlin & Jay Nelson
August 17, 2013
RIP, gone but not forgotten
Brian Tarvin
August 17, 2013
There is no ending,no final goodbye,
Here we will be mending and our eyes shall not dry.
As we hold on to your memory we shall never forget
The strength love and laughter you gave to all you met.
For you my brother shall forever shine
As you live in our souls, our hearts, our minds.
Till we meet again brother, till we meet again.
SSG. Richard Carinci
August 17, 2013
You will be missed Brady!I cant beleive your gone. You always made me smile. Love you and miss you
Lisa Trujillo
August 15, 2013
Rest in peace Brady, you will be greatly missed. God bless your family and friends.
August 15, 2013
You will be missed! Thanks for giving your all! You're in the arms of the Lord now R.I.P.
Tamia Long
August 15, 2013
you always had a way of making people laugh some times bringing tears to my eyes with the goofy things you did , today and for the days to come when I think about you
I will smile , I will laugh and you will still bring tears to my eyes rest in peace my son and know you will be missed and loved by many. I Love you
Jack Tucker
August 15, 2013
I just want to say thank u for ur service an my prayers an thoughts go out to all ur family an friends who's lives u touched..
lisa Anderson
August 15, 2013
Blessings to the Hammer family & friends.
Merciful peace to Brady.

With love ~
Debbie Cook
August 14, 2013
May God bless you and your family in this time of sorrow.
August 14, 2013
Rest in peace, young soldier. From all at United states Submarines veterans, Rhode Island chapter
Richard Meunier
August 14, 2013
The Final Salute

This “Hand Salute” is the last that we shall render to Brady James Hammer our Brother in Arms. To his family it symbolizes the love and respect that we have for Brady. And to Brady it is rendered as a symbol of honor and gratitude to thank him for his service in support of Operation Iraqi Freedom and for the selfless sacrifices he made for his country while serving with the U.S. Army. No greater love and patriotism is shown than a man dedicate his life in service to his country. Brady, you are a brave Army Warrior and a true Patriot. We bid you a sad farewell. You will be dearly missed from among our ranks. Be at ease. Rest in Peace.

On behalf of the 1,261 military veteran Legionnaires of Lowe-McFarlane Post 14 of the American Legion and the 233 veterans of VFW Post 2238 in Shreveport, Louisiana, we extend our sympathies and our condolences to Brady's family and loved ones.

James Maziraz, Commander, VFW Post 2238
1245 Gary Street, Shreveport, LA 71101
For the Commanders, Carroll R. Michaud
August 14, 2013
Brady I wish I had got to see you more but the time I did get to spend with you will always be where you left them, in my heart. Miss you buddy!!!! <3
Delta Symons
August 13, 2013
Brady you have always been a little brother to me. You have dug me out of a few many holes as I did you. Never once did we leave each other in time of need. I know you are watching over all of us and u will guide us through life as we know it. Love and miss you little bro.
Scott Farris
August 13, 2013
Brady, thanks for being you, the time I got to spend with you and the memories I get to keep. I miss my Nephew my friend.
love you Brady
Justin Powell
August 13, 2013
Buddy I'm gonna miss you a lot and everytime I sing kareoke it will be both of us singing even though you know I didn't like country!!! Rest in peace my brother...
Johnny Fuentes
August 13, 2013
You were a good man Brady..You'll be missed by many..R.I.P.
Greg Lara Jr
August 13, 2013
I will always miss your beautiful smile and great big hugs, you always knew how to put a smile on everyone's face!!! Prayers to the Family during this difficult time
Missy Say
August 13, 2013
Thank you for the wonderful times you shared with my daughter. Denise will never forget you. My condolences to the Hammer Family. Feel proud of your son's service to our country. May God provide you comfort at this time and know that someday we will all see each other again. Rest in peace Brady.

Love, Grandma Hammer
Sharon Hammer
August 12, 2013
I love you Brady my heart and love will always be with you
Donna Mikesell
August 12, 2013
Brady was a one of a kind comedian, he always knew how to lift someone's spirits even when no one else could! Brady made a difference in so many lives and was loved by many! Anyone who he came into contact with received a piece of his heart! Brady was a very special man and I miss him dearly! Thoughts and prayers go to everyone in need! May you Rest In Peace until we all meet again.
Ashley Stratton
August 12, 2013
Brady, you will always be in my heart!
Kami Spriggs
August 12, 2013
Showing 1 - 67 of 67 results