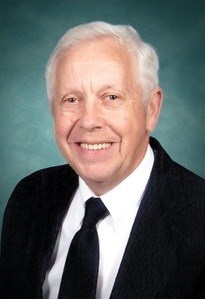 He was born in Castlewood, Virginia; son of the late Gilbert J. and Margaret Bevins Meade. He was preceded in death by two brothers, Bernard Meade and Gene Meade; one grandson, William Todd Fields; and one brother-in-law, Ralph Wallace.

Fred was a lifelong businessman who loved his community and ran BIG M Discount Stores for more than 45 years. He was a member of the First Baptist Church in St. Paul, Virginia for many years where he was a Deacon of the church, Sunday School teacher, and served on various committees including the Virginia Baptist Association. He was a founding member of the Board of Directors of New Peoples Bank since its inception. Fred was also a founding member of the Board of Directors for Southwest Bank of Virginia, a member of the Industrial Development Authority of Russell County, and a former member of the Russell County Chamber of Commerce. He loved being outdoors bird hunting, fishing, and loved to farm.

The family will receive friends from 12 until 2 p.m. on Thursday, June 17, 2021, in Castlewood Funeral Home in Castlewood, Virginia. The family would like to give special thanks to Fred's caregivers, Jackie Meade and Katie Ingle. In lieu of flowers, donations may be made to the First Baptist Church in St. Paul, P.O. Box 546, St. Paul, Virginia 24283, in his memory. Online condolences may be sent to the Meade family through our website and a video tribute and funeral service may be viewed at www.castlewoodfuneralhome.com. Castlewood Funeral Home is in charge of the arrangements.
Published by Bristol Herald Courier on Jun. 17, 2021.
To plant trees in memory, please visit our Sympathy Store.
MEMORIAL EVENTS
Jun
17
Visitation
12:00p.m.
Castlewood Funeral Home
80 Donnie Dean Drive, Castlewood, VA
Funeral services provided by:
Castlewood Funeral Home
MAKE A DONATION
MEMORIES & CONDOLENCES
Sponsored by Castlewood Funeral Home.
2 Entries
With Deepest SympathySo sorry to hear of Fred´s passing. He always had a sweet smile and hello to everybody. In our prayers and thoughts Jimmie, and family.
Dennis and Judy King
Friend
June 17, 2021
Fred will be missed by everyone he touched ! Sorry for the loss Ed & Gloria Blankenship
Ed Blankenship
Work
June 17, 2021
Showing 1 - 2 of 2 results