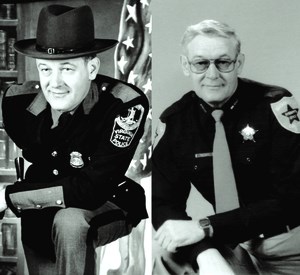 Joe was born in Troutdale, Grayson County, Va., and lived in Washington County Va. for over 55 years.

He enlisted in the United States Marine Corp in 1954 and served his country until 1958; obtaining the rank of Sergeant. After the Marine Corp he joined the Town of Abingdon Police Department before being hired with the Virginia State Police where he achieved the rank of Master Trooper and served for 30 years. He was elected Sheriff of Washington County, Va., from 1992 to 1995. After finally retiring he enjoyed the great outdoors, hunting and hiking on Pine Mountain, picking blueberries, fishing and walking every day.

Joe was the former Commander of the American Legion in Damascus, Va., where he was instrumental in starting the Damascus Veterans Memorial Park. He was a charter member of the Virginia State Police Association. A founding member of the Veterans Memorial Park Foundation in Abingdon, Va. He was a member of Ducks Unlimited, the Washington County Sportsman's Club and life/benefactor of the National Rifle Association. He was the former President of the Abingdon Lions Club and served many years as the Eye Sight Chairman for the organization.

A funeral procession will assemble at the Virginia National Guard Armory, exit 22 off I-81, 26460 New Banks Rd., Abingdon, Va., at 12:30 p.m., on Monday, November 29, 2021, to travel to the cemetery. Graveside services will be conducted on Monday, at the Troutdale Town Cemetery in Troutdale, Va., where he will be buried, with Virginia State Police Chaplain, Special Agent, A.W. Peery conducting a brief service.

It's winter, its cold, its Troutdale at the end of deer season, dress in your warmest hunting gear. Joe Dale would do it and would love it if you show up in your hunting attire.

The family would like to recognize and thank the caregivers that took such great care of Joe at Heritage Hall Nursing Facility in Front Royal, Va.

Online condolences may be expressed at www.frostfuneralhome.com.