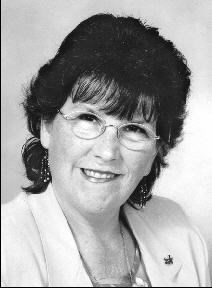 On the morning of August 19, 2010 with family at her side, our beloved mother, daughter, sister, friend and inspiration passed on to be with the Lord after her 12 year battle with brain cancer.
She is survived by her parents, Bob and Linda Barrett; her sons, Sam and Ben Bisset; brothers, Brett Barrett (Kim), and Russell Barrett (Kira), nephews; Robert and Dylan Barrett; and niece, Vanessa Blanchard (Tom).
Brigitte was born on March 25, 1960 in Seattle, WA. She graduated from Lynnwood High in 1978 where she was a cheerleader and made many, many lifelong friends who visited her frequently during her illness.
She was a long-time real estate agent at MacPherson's Realty in Marysville, WA. We are sure that she's playing Yahtzee, painting ceramics, and watching M's games with her good friend, Jesus (she may even tell him her favorite Lemon Drop recipe!).
Should friends desire, contributions may be sent to the University of Washington Neurology Tumor Fund, UWMC Department of Neurology, Box 356465, 1959 NE Pacific Street, Seattle, WA 98195.
A service will be held on Thursday, August 26, 2010 at 7:00 p.m. her longtime church home, Marysville United Methodist at 5600 64 St NE in Marysville.

Published by The Herald (Everett) on Aug. 22, 2010.
To plant trees in memory, please visit the Sympathy Store.
MEMORIAL EVENTS
To offer your sympathy during this difficult time, you can now have memorial trees planted in a National Forest in memory of your loved one.
MAKE A DONATION
MEMORIES & CONDOLENCES
12 Entries
Brigitte ,
May your smile live on in the eye of those who loved you . May your family find peace in the fact you are with our father.You put up one heck of a fight girl ! Those of us that knew you before the cancer and after had the joy of knowing your true spirit ! God bless you and your family.
Lori White
August 27, 2010
A wonderful friend, a beautiful soul, you will be missed greatly. May you rest pain free, and enjoy your new life in heaven.
We love you~
Tony, Lisa & Lindsay Martinez
August 26, 2010
Brigitte, simply one of the nicest people I have ever met in my life. The world will miss your light, while heaven welcomes home an angel. May the memory of your smile, warmth, generosity and strength be a lasting comfort and legacy for your children and family.
rietta costa
August 26, 2010
Brigitte, today your family and friends will gather to remember you and celebrate your life and the sweetness of who you are. You would be so proud of Sam and Ben, and honestly I believe you can see it anyway. I'm so glad that even though we became friends under unusual circumstances I want you to know that I love you and thank you for making such a difficult situation so easy. We really are one family and I know that you are hanging out with Joel's mom and other family free from pain and in paradise. I admired your courage and humility during your illness. Until we meet up again my friend...
Laurie Bisset
August 26, 2010
Brigitte as my friend you touched my heart and will remain in my thoughts forever. As a daughter, a sister and a mother I know your entire family is so proud of you for all the challenges you faced with very little complaints. I will always remember the Birthday wishes we shared, and the fact you loved that I was one day older.... I love you, until we meet again!! (Save a Lemon Drop for me!!)
Jeff Ries
August 25, 2010
My condolances to the Barrett family, Bob and Linda and their children. It has been a long struggle for you. My heart feels your sorrow. May God's blessings be with you during this time of sorrow.
Judy Olson Rikansrud
August 24, 2010
Brigitte you were the best friend a girl could have. We had so much fun together over the last 23 years. I will miss you so much.Even when you couldnt speak anymore you had a way of making me laugh with your expressions. I so enjoyed your company. Iwill see you one day in Heaven. Love you always.
Cheryl Haugen and Family
Cheryl Haugen
August 24, 2010
It was my pleasure to know you over the years. You were always so friendly and always smiling. You were a true Christain. May you rest in peace.----Carol Beam {Everett, Wa.
August 23, 2010
My thoughts are with you.
Carrie Harris
August 23, 2010
Please accept my heartfelt sympathy on the passing of your dear mother, daughter and friend. I am so grateful I had the opportunity to reconnect with Brigitte in recent years. I recall fondly junior high dance parties, joint babysitting ventures, ski school lessons and always, Brigitte’s radiant smile.

My thoughts and prayers are with you.
Janet Kristiansen Gant
August 22, 2010
I know Mom welcomed you with a great big hug! So many ppl in heaven will make certain your jesus will provide comfort and solice to your children, Mother, Father and Brothers, Brett and Russell. I'm sorry I didn't see you prior to your passing. I wanted to kiss your forehead and let you know how much you meant to me while I was growing up. I know you will be missed by many! I shall see you in heaven, Bridgett! Until then, I know many ppl who will welcome you into heaven.
Cara Kuller
August 22, 2010
God bless you Brigitte, we love you and miss you ~ Celebrate joyfully with Jesus in Heaven, until we meet again ~ oxoxo
Kortney Schaaf
August 22, 2010
Showing 1 - 12 of 12 results