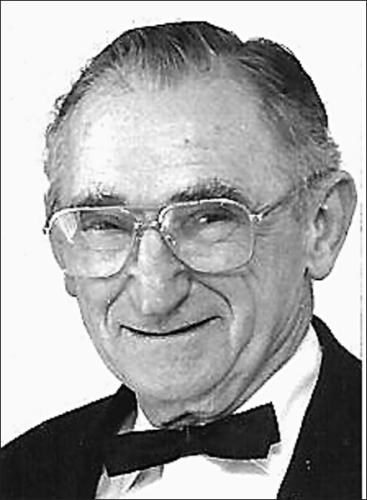 FUNERAL HOME
Purdy & Walters at Floral Hills
409 Filbert Road
Lynnwood, WA
Clifford E. Schmierer, 93, died on May 9, 2014. He was born and raised in Ellendale, ND. Cliff was a Navy veteran of WWII, serving as a Lt. in a Scout and Raider Unit in the interior of China. He was a teacher in the Granite Falls and Everett School Districts, retiring in 1979 from Evergreen M.S. He loved woodworking, fishing and hunting. He was married to Teresa Walsh in Phoenix, AZ in 1946, and was planning to celebrate their 68th anniversary on May 18th. Cliff was preceded in death by his son, Kurt Schmierer in 1994. Cliff is survived by his loving wife, Teresa; his sons, Jerry (Theresa), and Mike (Barb); daughter, Ann; and sister, Clara. Cliff has four grandchildren and five great-grandchildren. Service arrangements: May 17, 2014, 11 a.m., Purdy & Walters at Floral Hills, 409 Filbert Rd., Lynnwood, WA. Reception to follow. In lieu of flowers, donations may be made to the Kurt Schmierer Memorial Scholarship, WWU Foundation, 516 High St, Old Main 430, Bellingham, WA 98225-9034. Online memorial and comments: www.mem.com

Published by The Herald (Everett) from May 11 to May 15, 2014.
To plant trees in memory, please visit the Sympathy Store.
MEMORIAL EVENTS
To offer your sympathy during this difficult time, you can now have memorial trees planted in a National Forest in memory of your loved one.
Funeral services provided by:
Purdy & Walters at Floral Hills
MAKE A DONATION
MEMORIES & CONDOLENCES
12 Entries
Mike & Family,
I too was a Woodshop and Mechanical Drawing student. He was a no nonsense teacher, which was the way it had to be using machinery. He inspired me to a life long love of woodworking. Thank you Mike for bringing your Dad to our reunion. I got all inspired again. So sorry for your loss.
Dennis Barci
May 24, 2014
Dear Tess and family, This is my second attempt as I was interrupted last nite and my almost finished message was lost!!
The service today was a real tribute to Cliff and Jerry, Mike and Ann did a terrific job in their tributes to their dad....I am sure he was very proud of them!!
I learned a lot about Cliff that I didn't know in the wonderful obituary. He was a close buddy of my dad and I'm sure that they have had a wonderful reunion above, and that Curt was right in there with them! Cliff was always their for my mom after my dad passed in 1971.....so appreciated by her and all us kids.

What true friends Cliff and Tess have been through the years.....,such special people. They are one-of-a-kind and he will truly be missed. But those great memories live on forever!
May 17, 2014
Tess, Bob and I were neighbors across from you in Mariner Village. You both were so loving and helpful to all of us, and when you moved, it was hard to get used to seeing your house but not you or Cliff. We send you, your daughter and sons, our heartfelt sympathy at the loss of Cliff. What an amazing man!
Carol Pulli
May 16, 2014
Cliff's moment's-notice kindness, the coffee always ready, that was the starting line for how the rest of every visit would progress. Kurt would drag me and others to the door, jackets dripping, shoes sullied (we were sheepish and not really presentable)(Charlton Durant maybe the most egregious case) but Cliff Schmierer would simply laugh and beckon us in. This was not an isolated welcome but something that played out many times. Tess, my heartfelt condolences! You too would laugh and beckon us in. That is how it played out.
Lance Tichenor
May 16, 2014
I first met Mr. Schmierer when I took his Woodworking class at Evergreen Jr High School in 1959. He was the greatest woodworking instructor I ever met. I have often thought about him and what I learned from him while I am out in my shop building or repairing some piece of furniture. Do you guys remember the whistle he kept around his neck when it was time to stop making sawdust and clean up the classroom.

My prayer are with all of his family at this loss. He was a wonderful man, and mentor for all of us. God Bless !
Ron Clark
May 16, 2014
Mike, my prayers are with you and your family. Our parents are the greatest generation. Celebrate your dad's life and the memories you can share. I went to school with Mike, Mar Owenby
Marc Owenby
May 16, 2014
I went to school with Mike and I'm so sorry for his and his family's loss.
Terry Asiala (Bjorklund-Taylor)
May 15, 2014
An honorable man, the exemplification of "The Greatest Generation". He will be missed by all who knew him.
Joe Davis
May 13, 2014
Dear Tess and Family
We are so sad to learn of Cliff's passing. . . what a wonderful man and friend. We are thinking of you all and sending our love. He was the real deal of men. We imagine he and Kurt are probably reminiscing and have a lovely time together right now. But - oh we miss them so. Dave, Barbara and Jessica Hose
May 13, 2014
Cliff was my mentor on many great fishing trips. We had super times and shared much. He was a great teacher and friend. Sincerely, Pat
Pat Maher
May 13, 2014
May God bless you and your family in this time of sorrow.
JIM AND JANE PAUWELS
May 13, 2014
Mr. Schmierer was the quintessential shop teacher. I took his class at Evergreen every opportunity I could and learned a lot of skills that I take for granted today. It probably drove him crazy that all we made were skateboards! I remember his green shop apron and constant preaching of shop safety. It's too bad that so many of these programs have been cut from today's schools and kids miss the opportunity to learn from men of character, like Mr. Schmierer.
Dale Woodard
May 12, 2014
Showing 1 - 12 of 12 results