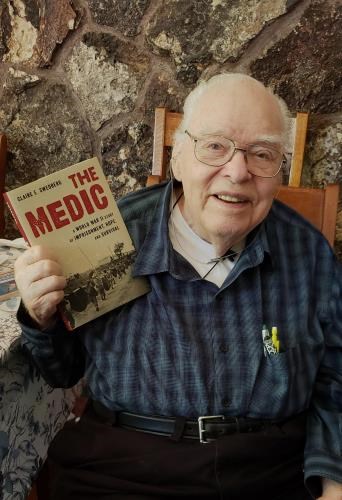 Henry T. Chamberlain Jr., passed away August 31, 2021. He was born in Morris Bluffs Nebraska on June 6, 1922. He joined the U.S. Army on his birthday in 1940 and served as a surgical technician. He was stationed in the Philippines, as a Medic, when World War II broke out, and was attacked and captured by the Japanese Imperial Army. During his three and a half years in captivity he witnessed the Death March, was held in the infamous POW camp Cabanatuan, was transported to Japan in a Hell Ship, and spent the last months of the War providing slave labor in a Mitsubishi mine. Throughout that time he never stopped treating the sick and wounded, with the few tools and medicines at his disposal. When he was liberated and returned home he met his sweetheart Dorothy Wunnenberg, who was a member of the Women Army Corps, as a surgical technician, while serving at Ft. George Wright, WA. They married Nov 14, 1947 at the Hollywood Palladium, CA. and were together nearly 60 years before she passed in 2007. Henry reenlisted into the Air Force and retired in 1968 as a Senior Master Sergeant. After he retired he went to Seattle University and earned his B.A. in medical records Admin.. He volunteered for several years at the Veterans Administration in Seattle and helped veterans and their families receive their full military benefits. He always quoted his motto: "I live to help those who cannot help themselves." Henry and Dorothy leave behind seven children and sons/daughters-in-law: Michael (Tammy), Cassandra, Michelle, Shirley, Mary (Cliff), Cheryl (Kelly), Rebecca (Duane) and ten grandchildren, Joshua, Ryan, Shawn, Becky, Tara, Aaron, Blake, Danen, Cameron and Tyler: and four great-grand children; Courtney, Beau, Soleil and Elijah. Henry and his family would travel the world to Canada, Okinawa and the Philippines and many states where he was stationed. Henry had many special interests and never lost his zest for life. He was a master at woodcarving and belonged to the Quilceda Wood Carvers and taught for many years. He won several awards for his various carvings. He was a member of the Snohomish County Search and Rescue Team and The Mountain Rescue Council of Seattle. He was an active member of the American Defenders of Bataan and Corregidor Memorial Society. In 2017 he returned to Japan as a guest of the Japanese Society of Friendship With POWs for a reconciliation visit. He was escorted by the Puget Sound Honor Flight in 2019 to Washington D.C. to visit the U.S. War Memorials. His book, The Medic by Claire Swedberg was released on June 1st, 2021 and chronicles his life in captivity during World War II. He had his debut book signing in LaConner, WA in June and was very proud of the dedication he and Claire committed to getting the story of his experience forever documented in history. He was devoted to his family and dearly loved. He will be missed but has been reunited with his love. A private ceremony will be held at Floral Hills Cemetery and Tahoma National Cemetery at a later date. In lieu of flowers please consider a donation to: The American Ex-prisoners of War, 3201 E. Pioneer Pkwy, Suite 40, Arlington, TX 76010-5396 or American Defenders of Bataan and Corregidor Memorial Society (ADBCMS) https://www.adbcmemorialsociety.org/Memorial-Donations

Published by The Herald (Everett) from Sep. 14 to Sep. 15, 2021.
To plant trees in memory, please visit the Sympathy Store.
MEMORIAL EVENTS
To offer your sympathy during this difficult time, you can now have memorial trees planted in a National Forest in memory of your loved one.
MAKE A DONATION
MEMORIES & CONDOLENCES
5 Entries
I am the daughter of Orin J Hudlow whose WWII experience mirrors that of Henry. My father was stationed in the Philippines prior to the outset of the war. He was taken prisoner when Corrigedor fell and also sent to Cabanatuan. He was taken by Hell ship Nissyo Maru to Japan and worked as a slave in a steel factory. He weighed only 98 pounds when he was repatriated. After being stationed various places, we settled in Everett and Dad was stationed at Paine Field. He was also a member of the Defenders of Bataan and Corrigedor. I have his journal from Cabanatuan and articles written about him in Everett and Alaska when we were stationed there. They are among my most treasured possessions and I would be happy to let you see them as we might find they knew each other. I was amazed to learn about Henry as I did not realize there were former POWs still alive, much less living nearby. I am truly sorry for your loss and honor Henry's life.
Sandy Desy
Other
October 2, 2021
Sending condolences to this family...he was such a special man...many wonderful memories. Peace be with you...
Meredith Kilwine
September 16, 2021
What an inspiring life he led. Peace to all of you
Bonny mcmahon
Other
September 14, 2021
Kathleen Turnerfuerst
September 14, 2021
I will miss you always Dad. You´re with Momma now. I love you forever.
Mary Peterson
Family
September 14, 2021
Showing 1 - 5 of 5 results