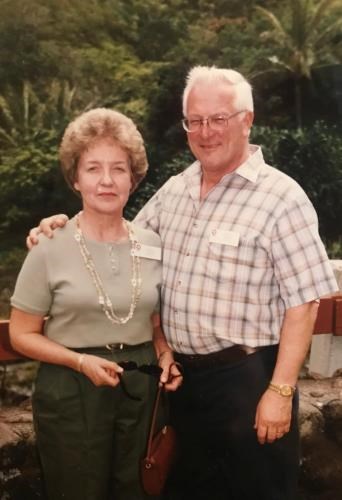 Nicki M. Miller and Carla Miller of Monroe, Washington passed away at home on October 15, 2021 and October 18, 2021, respectively. Nick was born to Minor and Luella Mae Miller on September 17, 1938 in Duluth, MN. Carla (Anderson) Miller was born to Carl and Elinor Anderson on June 22, 1938, in Duluth, MN. Both Nick and Carla graduated from Alborn High School, Alborn, MN and were married in 1957. They shared 64 years of marriage together.

Nick proudly served his country while in the Air Force from 1957-1962, while Carla spent those early years raising their three children and homemaking. Nick and Carla went on to become entrepreneurs together, jointly owning and operating a Texaco Service station in Bothell. They also spent over thirty years sharing the joy of Christmas through their choose and cut Christmas tree farm, St. Nick's Trees.

Carla and Nick were known and loved by many among their family, friends, and community. They faithfully served the Puget Sound Christmas Tree Association and others, during their years of tree farming. Dear friends and strangers alike often knew them for their quiet generosity.

Nick and Carla were preceded in death by their sons, Tim and Mike. They are survived by their daughter, Sheri and son-in-law, Jeremy, and several grandchildren and great-grandchildren, sisters, brothers, nieces, and nephews.

Funeral services will be held Friday, October 29, 2021 beginning at 10:00 AM at Purdy & Walters at Floral Hills, 409 Filbert Road in Lynnwood, WA 98036. Donations may be made in Nick or Carla's name to Providence Hospice and Home Care of Snohomish County, 2731 Wetmore Avenue Everett, WA 98201.