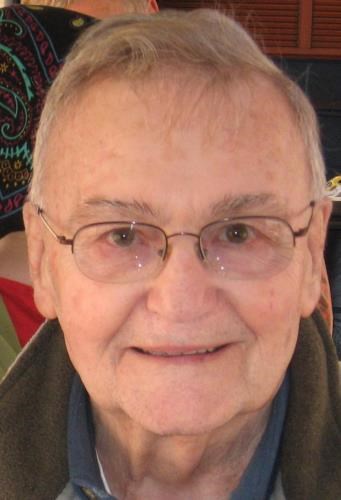 Our family mourns the loss of our dad and grandpa. Robert "Bob" Barnard was born in 1928, joining older sister Gertrude and parents George and Lois Barnard, all of whom loved and cherished him.

Bob grew up in Fortson, WA, Ketchikan, AK, and Darrington, WA. Due to his mother's terminal illness, he moved in with his sister and brother-in-law, Gertrude and Charlie White, when he was in the fifth grade and was raised by them. It was during this time that he accepted the Lord as his Savior while attending church with his sister.

He loved football, playing and lettering in both that and baseball during all four years of high school. We enjoyed hearing his stories about working and living on the Sturgeon farm on the Sauk Prairie, handling minks when working for Otto Klein, and driving truck for Oliver Satra, just to name a few. He met and fell in love with Mary Terhorst, and their first date was set up by Mel and Ruth Koster. Bob served honorably in the U.S. Army. Following his discharge, he and his new wife made their home in Arlington.

He applied at the U.S. Forest Service on a whim in the early 1950s and, a short time after being hired, Bob and Mary moved to Darrington. It was there that they raised their three daughters. He believed in community participation and served as a member and chair of the Darrington school board, served on numerous advisory boards, and helped build the new ball fields at the Darrington high school. When he and Mary moved to Marysville in 2005, the Darrington Town Council recognized him for his unwavering interest in the affairs of the town.

Bob was a man of integrity, and he taught his girls to always do the right thing even if it wasn't popular, to respect authority, and to treat everyone fair regardless of their social, ethnic, or economic standing. He was supportive of his family's interests and never criticized their work product. Bob was an avid reader and instilled a love of reading in his daughters. He was a faithful husband to Mary for over 57 years, a devout and supportive father, and a proud grandfather.

Bob was preceded in death by his wife, Mary. He is survived by his children, Sherry and Ed Dusek, Gail and Rick Lorenz, and Sonya and Steve Kraski; four grandchildren; and four great-grandchildren.

November 21, 2021
Published by The Herald (Everett) from Nov. 25 to Nov. 26, 2021.
To plant trees in memory, please visit the Sympathy Store.
MEMORIAL EVENTS
Nov
29
Funeral service
10:30a.m.
Marysville Gospel Hall
5202 116th St NE, Marysville, WA
MAKE A DONATION
MEMORIES & CONDOLENCES
2 Entries
Dear Sherry, Gail and Sonya, How I hoped to be able to be there with you today, but it couldn't happen, though I was there in spirit and you are all in my heart. Our years together on the Mt. Baker National Forest were precious to my Dad (Jack Tibbets) and me and are still major in my own basic background. Jim and I so appreciated your Dad being with us at Martin's memorial, and especially his bringing the messages from you. I look back on the times I cared for you girls in your early childhood and the many visits to your Mom's family with great fondness, and wish you and your families all the best of what's to come, secure and comforted in your abundant good memories.
Merlene Tibbets Buller
Work
November 29, 2021
So sad to hear of Bob's passing. He was a really good man. May the many memories he made with his family comfort them during this time of their loss.
Judy (White) O'Connor
Friend
November 25, 2021
Showing 1 - 2 of 2 results