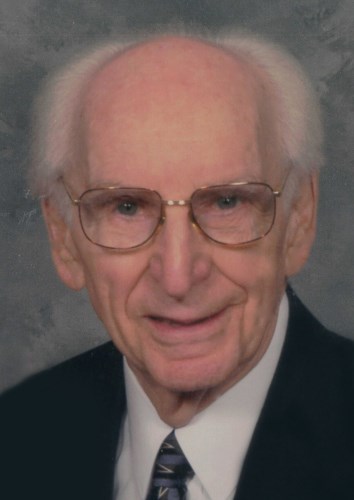 A celebration of life service will be at 11 a.m. Saturday, Oct. 23, 2021, at Napier Parkview Baptist Church, 245 W. Napier Ave, Benton Harbor. Interment will follow at Riverview Cemetery in St. Joseph.

He graduated from Akron (N.Y.) High School in 1940, and attended Bowling Green State University before enlisting in the U.S. Navy in December 1942. Following officers training, as an ensign, he served aboard the destroyer USS Gleaves in the Pacific, and later was assigned to the USS Hickox.

In 1947, he earned his bachelor's degree in math and industrial arts, and in 1951, his master's degree, from BGSU. He earned his education specialist degree in 1969 at Eastern Michigan University.

Later, he returned to his first love of teaching math, until he retired from full-time teaching in 1984. He then taught math in the adult education program for 12 years in Benton Harbor until his full retirement in 1996 at age 73 – making a total of 49 years devoted to education.

In the same year, Hutch and Grace celebrated their 50th anniversary, going on to enjoy 66 full years of marriage.

Carlton was an avid stamp and coin collector, and enjoyed making projects in his workshop. He was active at Napier Parkview Baptist Church, serving as teacher, moderator and deacon, and recorded the church history of baptisms and memberships.

He was preceded in death by his wife, Grace; his parents; five brothers, Durward, Robert, Chartley M., Donald and Allen; son-in-law, Kim Bailey; and two great-grandsons, Gideon and Isaac Hutchinson.

In lieu of flowers, memorials can be made to Wounded Warriors, 4899 Belfort Road, Suite 300, Jacksonville, FL 32256 or woundedwarriorproject.org.