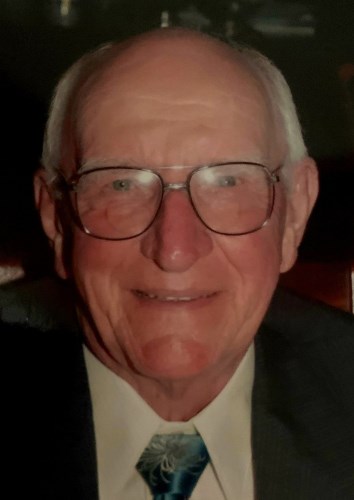 He grew up on the family farm, and attended Stickney School until the fifth grade, when he went to Watervliet Public Schools and graduated high school. After high school, Bob continued his education on a full scholarship to the University of Michigan, earning his bachelor's degree.

Bob was an engineer in research and development for electrical components. He worked for Whirlpool, Chrysler Missile, American Standard, Micro Devices and Emerson Electric, throughout his career.

When Bob wasn't working, you could find him woodworking, fixing things or fishing. He loved fresh and salt water fishing and boating, surf fishing on the Gulf of Mexico, and trolling for salmon on Lake Michigan. Bob also served with the International Executive Service Corps in Kazakhstan for six months.

Above all his accomplishments, Bob's great love was his family. At the age of 7, Bob met Theresa Phillips, a neighbor girl, through friends. Eighteen years later, they married on June 19, 1954. They enjoyed 55 years together, raising seven kids and later spoiling grandchildren until Theresa's passing in 2009.

Bob died of natural causes in the company of his family in his home at Sun City in Georgetown, Texas.

Bob is preceded in death by his wife, Theresa; parents, Emil and Margaret (Machatka) Plasko; and two sisters, Margaret Plasko and Gloria Gunn.

To leave a message of comfort for Bob's family, visit www.hutchinsfuneral.com.