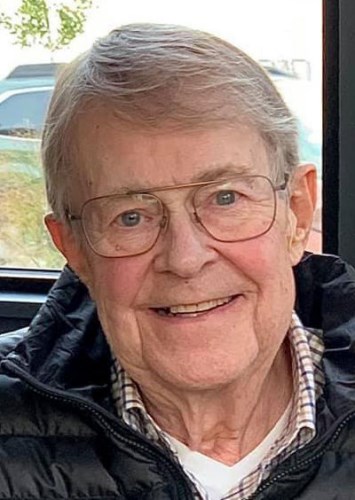 Robert Lee Blackburn was born in Battle Creek, Mich., the only child of Charles Lee and Vivian Eleanor Blackburn.

He graduated from Benton Harbor High School in 1956, and obtained his bachelor's and master's degrees from the University of Michigan in 1962.

He married Alice Edith Peters in 1962.

Robert had a varied career, starting as an engineer for a contractor in the U.S. space program in Los Angeles, and finishing as a vice counsel for trade at the British Consulate in Chicago.

Over the years, Robert had many hobbies. He loved sailing – which he once taught at the St. Joseph Yacht Club – and even had his own sailboat on the Chesapeake Bay. Robert enjoyed golf, books and walking in the woods.

He retired from Chicago to Spring Lake, Mich. He was particularly interested in researching his genealogy.

He was baptized at St. John's Lutheran Church in Grand Haven, Mich. Robert volunteered for many years at the Tri-Cities Historical Museum helping to catalog its collection. He enjoyed his weekly breakfasts with friends.

Robert asserted that, over his life, he never "figured it out." But he made many lifelong friends, charmed many more, and loved his family unconditionally.

Robert died peacefully on Oct. 6, 2021, in Muskegon, Mich., surrounded by Alice, his children and his grandchildren. Robert will be buried in a private ceremony at Hicks Cemetery in Battle Creek, Mich., on Nov. 20.

In lieu of flowers, donations can be made to Trout Unlimited, Alliance for the Great Lakes, St. John's Lutheran Church in Grand Haven, or your favorite charity.

Published by The Herald-Palladium on Oct. 15, 2021.
To plant trees in memory, please visit the Sympathy Store.
MEMORIAL EVENTS
Nov
20
Burial
Hicks Cemetery
Battle Creek, MI
Funeral services provided by:
Sytsema Funeral & Cremation Services - The Lee Chapel
MAKE A DONATION
Please consider a donation as requested by the family.
MEMORIES & CONDOLENCES
0 Entries
Be the first to post a memory or condolences.