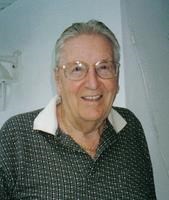 BORN
1917
DIED
2016
FUNERAL HOME
Farley Funeral Homes and Crematory - Venice
265 South Nokomis Avenue
Venice, FL
Carrico, III, Andrew
October 31, 1917 - October 13, 2016
Andrew Carrico III, 98, passed away peacefully at home on October 13. He was born 31 October 1917 in Washington, D.C. son of the late Andrew Carrico Jr and Esther Johnson.
Andy was a graduate of St John's High School in Washington, D.C. where he was living when he was drafted into the Army in 1941. After Officer Candidate School he was promoted to First Lieutenant. In June of 1943 he became a paratrooper at Fort Benning, Georgia and served in the 511th Parachute Infantry of the 11th Airborne Division, commanded by MG Joseph Swing. At Camp Mackall, North Carolina he became a platoon leader of D Co. A great many of the men who were assigned to him there went all the way through the action in Leyte and Luzon in the Philippines. After intensive jungle training in New Guinea, the 11th Airborne Division sailed into Leyte Gulf 22 Nov 1944. Andy's platoon of thirty-five men were honed and ready to fight the Japanese. They got their chance! They came ashore on the beach at Leyte Gulf under heavy Japanese attack from the air. The outfit fought through that area, and headed up into the mountains where the Japanese were heavily fortified. The mission was to advance across the unmapped jungle of the central mountains into the interior of the Island and make contact with the American 77th Division, which was to land on the western side of the Island near Ormoc – the enemy's major reinforcement and supply base. Their Japanese foe was a fanatical enemy.
The awful, bloody battles fought on Leyte were regarded by the officers and men as the toughest of all the 11th Division fights.
The Regiment sailed from Leyte to Mindoro where they prepared for a combat jump on Tagaytay Ridge in Luzon, the most important position in Southern Luzon. They participated in the Battle for Manila, piercing the Genko Line, a strong Japanese defense fortification.
Andy and his men saw heavy action at Imus, which was heavily fortified by Japanese marines. They also were involved in a fierce battle for Mt. Bijang. A terrible toll was taken by his Company that day, and his men were superb fighters, as they had been throughout all of the action. Nineteen men were killed or wounded. Andy was hit by a Japanese machine gunner. He returned home and was retired with full disability.
Andy was awarded the Army Parachutist Badge, a Bronze Star with an oak leaf cluster, a Purple Heart with an oak leaf cluster, the Presidential Citation Unit Medal, the Philippine Liberation Medal, World War II Victory Medal, the American Defense Medal, as well as World War II Asiatic-Pacific Campaign Medal with Beachhead Battle Stars for the Pacific Theater. His most prized award was the Combat Infantryman's Badge.
After his military service, Andy returned to civilian life and was employed by the Bell System in Arlington, Virginia, from which he retired in 1977. He married Jane Barnett in 1977. They have resided in Venice, Florida for a number of years. Andy loved his family, as well as his extended family, and has been a strong force in all of their lives.
Andy loved a good joke, a good game of cards, and dressing up in costume on his birthday, which just happened to be Halloween! He was a master bartender and the life of the party. He was a good friend to his Harrington Lake neighbors. A more loyal fan of the Maryland Terrapins would be hard to find. He was the rock of our family.
Andy was preceded in death by his first wife, Lois Lilly, a daughter, Janis, a son, Andrew IV, a sister, Esther Carrico Kinsman. He is survived by his wife, Jane Barnett, of Venice, a son, Michael and his wife Laura of Cumming, Georgia and a daughter, Shelley Ashby of Reston, Virginia. His grandchildren, Susan Ridolphi, Robyn Crowther and husband Bosley, Nicole Carrico, Christopher Carrico, David Ashby, and Heather Ashby. His extended family, Candy and Jeff Holm and their family who reside in Salt Lake City, Utah. Richard Compton and Carol Didonna of Roanoke, Virginia, Grandchildren Jessica Martin, her husband Nate and their children Izack and Trevor, Matthew Holm, Jeremy Holm, Linnea and Joe Tullis, all of Salt Lake City.
Viewing is scheduled for Tuesday, October 18th, 6 to 8 pm at Farley Funeral Home, 265 S Nokomis Avenue, Venice. Funeral Services will be conducted on Wednesday, October 19th at 11:00 am at Christ United Methodist Church,1475 Center Road, Venice, Florida 34292.