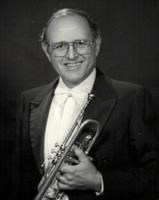 BORN
1928
DIED
2017
FUNERAL HOME
Hebrew Memorial Funeral Services - Sarasota
2426 Bee Ridge Road
Sarasota, FL
Adelstein, Bernard
April 24, 1928 - September. 30, 2017
Bernard Adelstein, 89, of Sarasota, FL, was born in Cleveland, OH to Frank Adelstein and Rose Hechtman Adelstein. Bernard was a world renowned orchestral trumpet player known for his lyrical sound. He began his career at the age of 16 with The Pittsburgh Symphony followed by The Dallas Symphony and The Minneapolis Symphony, where he served as principal trumpet. Bernard was invited to return to his hometown to join The Cleveland Orchestra as principal trumpet where he remained for 28 years. Bernard travelled the globe touring with the orchestras led by world famous conductors. He played on numerous critically acclaimed recordings. He taught at the Cleveland Institute of Music, Oberlin College, and later was a Professor of Music at Indiana University. In 1994, he moved to Sarasota with his wife, Connie. Regarded as one of the finest classical trumpet players and revered by his many students, he always remained extremely modest about his playing. He was known for his colorful storytelling, his humor and kindness. Highly devoted to his wife Connie, his children and his career, Bernard also loved his summer cottage on Martha's Vineyard. Bernard is survived by his wife, Connie; his children, David of Chicago, IL, Frank of Ithaca, NY, and Marlene of Cottekill, NY; grandchildren, Lisa and Joel Fishbain, and Robyn; and great grandchildren, Claire and Reagan as well as nieces Lyn and Ilene.
Funeral services will be 1:30 PM Wednesday, October 4, 2017 at the Jewish Congregation of Venice, 600 N. Auburn Rd., Venice FL, with burial to follow. Donations can be sent to the American Cancer Society and The Alzheimer's Foundation. Online guestbook at hebrewmemorialsarasota.com. Hebrew Memorial Funeral Services, 2426 Bee Ridge Road, Sarasota, is serving the family.