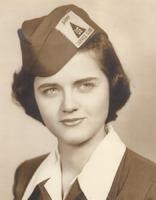 Colleen Young Wilson, 95, passed away peacefully under hospice care on September 7, 2021, in Sarasota, Florida. She was born on July 18, 1926, in Tulare, California, to the late Mary (Cornell) Young and Roy Young. Colleen had an older brother, Don. She often spoke fondly of sun-drenched bicycle rides in the San Joaquin Valley and family trips to Morro Bay.

To pursue her interests in writing, literature, and the theater, Colleen enrolled in the school of communications at Northwestern University. Colleen excelled at Northwestern and thoroughly enjoyed the theater program that included future acting luminaries Charlton Heston, Cloris Leachman, and Jeffrey Hunter. She forever kept her love of the written word and theater.

After earning a bachelor's degree in Theater and a master's in Speech, Colleen took a civilian Special Services job in Japan with the U.S. Army, then involved with the post-WW II administration of that nation. She toured different parts of the country and enjoyed learning about Japanese culture. While sailing home from Japan, Colleen met her future husband, Dr. Leo Wilson, Jr., a U.S. Navy doctor serving in the Korean War. Colleen and Leo were wed and lived in Rochester, Minnesota, and Miami, Florida, before settling in Sarasota.

Colleen played tennis and enjoyed family sail boating around Sarasota Bay and other points south. She enjoyed summer family camping trips to the cool Smoky Mountains. A voracious reader, Colleen always seemed to have a book, magazine, or newspaper at hand. Colleen was health conscious and enjoyed growing fruits and vegetables in her backyard. An interest in exotic horticulture moved her to become an early president of the Sarasota Fruit and Nut Society. In later years, Colleen continued her life of inquiry through Elderhostel programs and writing workshops at her retirement community. Performing in singing groups and comedic revues there brought her great joy.

Colleen is dearly missed. A family celebration of life will take place at a later date when the family can gather.


Published by Herald Tribune from Sep. 19 to Sep. 23, 2021.
To plant trees in memory, please visit the Sympathy Store.
MEMORIAL EVENTS
To offer your sympathy during this difficult time, you can now have memorial trees planted in a National Forest in memory of your loved one.
MAKE A DONATION
MEMORIES & CONDOLENCES
0 Entries
Be the first to post a memory or condolences.