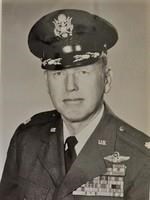 BORN
1924
DIED
2017
MacArthur, David Warren
August 31, 1924 - January 20, 2017
Remarkable Lieutenant Colonel David Warren MacArthur 92, of Venice, Florida died peacefully at home on Friday, January 20, 2017. David, born in Boston, Massachusetts was the son of Vaughn H. and Dorothy Betts MacArthur. Dave was a veteran of 3 wars. He entered cadet training in December 1942, with the Army Air Corps. He was assigned to the European theater of operations in April 1944, flying spitfires in north Africa and southern Italy, then transitioned to P – 38's. Shot down on a strafing mission over Thessaloniki, Greece in the early fall of 1944, the Colonel spent the rest of the war in German prison camps including Dachau and ending in Stalag Luft III in Sagan, Germany. He participated in the infamous winter march from Sagan to Moosburg, Germany, escaping 3 times but was recaptured. His father, an Army Chaplain with Gen. Patton in Germany, spent a many hours searching local prison camps in hopes of finding his son. It was in May of 1945, when Vaughn flew to the Stalag Luft III prison camp. He stood outside the fences, yelling Dave's name. He had found his son, and liberated him from prison camp. Vaughn was killed in a Jeep by an IED, in Czechoslovakia 3 weeks later. During The Korean conflict Dave flew a tour in F-51's with the 18th tactical fighter wing through 1951. Later, in a tour as a ground forward air controller with the seventh Republic of Korea division, he was captured by the Chinese and lead an escape, saving the lives of 126 men traveling some 60 miles south to friendly forces, earning the Distinguished Service Cross. He also spent seven years as a SAC B-47 pilot with the 100th Bomb Wing at Pease AFB, NH. Dave was assigned to Southeast Asia as an F–105 pilot. He was later assigned as chief test pilot for the 355th TFW, Takhli, Thailand. From the 355th Dave was assigned to Hickam as the Chief of Flight Test and Quality Control for the 6486th AB Wing. It was during the Hickam assignment that Dave played a role in the movie, "Tora! Tora! Tora!", of a fighter pilot participating in the attack on Pearl Harbor. Dave was honorably retired from the Air Force in 1971. He then worked selling Airplane simulators for Bertek all over the globe, before retiring to Cushing, Maine. He and Sharon moved to Venice, FL where he zealously fished and read. He is survived by his wife Sharon Kinne MacArthur, children Pamela Tetley, Kristin MacArthur, David Mosher and Bethanie Williams, and was grandfather to David, Kathryn, Megan, Thomas and Andrew as well as many loving extended family members and friends. A service with military honors, will be held at Sarasota National Cemetery, 11:30am, Friday, February 17, 2017. If desired, donations may be made to Tidewell Hospice, in Dave's memory. Arrangements are entrusted to Your Traditions Cremation and Funeral Chapel. www.yourtraditionsfuneralhome.com

He now soars in the heavens... with angels.
Michael Mercandetti
August 2, 2017
It was my privilege to have met David at a reunion of Korea War Veterans (502nd Tactical Control Group). We were in Framingham, Mass,around 1984, and he was kind enough to let me interview him about his WW2 and Korea battle events.
He was truly a professional military leader.
I was very impressed at his humility and courtesy, the marks of persons of quality.
We were all blessed to have known David.
My condolences to his widow and children.
John Michael Quinn. Capt USAF Ret.
Lebanon, Indiana
John Michael Quinn
February 15, 2017
We feel so honored to have known such an extraordinary hero who never called attention to himself. We extend our love and deepest condolences to Dave's loving wife, Sharon, and to all his family.
Steve and Mary Jeanne Moorman
Friend
February 8, 2017
My heartfelt sympathy and condolences to the MacArthur family. I have never had the privilege in my lifetime of meeting someone as honorable, brave and courageous as David MacArthur. We can only imagine the pain and suffering that Dave endured through the wars trying to protect and fight for our country. He was truly an exceptional, special and remarkable person and it was an honor to have known him. I will personally miss his funny sense of humor, quick wit, and always cheerful and smiling face. He was one of a kind and will greatly be missed by all of us who had the pleasure of knowing him.
Michelle Scovil
February 1, 2017
Without a doubt this man was not only a hero for his country but no better friend could another human being ever have.
God Bless you my friend!
Will
Will Payson
January 29, 2017
Showing 1 - 5 of 5 results