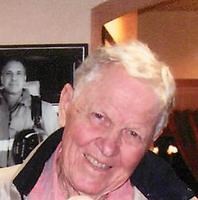 BORN
1928
DIED
2016
FUNERAL HOME
Lemon Bay Funeral & Cremation Services
2 Buchans Landing
Englewood, FL
Peterson, Eugene
Oct. 29, 1928 - Mar. 25, 2016
Eugene F. "Pete" Peterson 87, of Englewood, Florida died March 25, 2016. He was born October 29, 1928 in Auburn, New York to Andrew and Mildred (Lawson) Peterson.
He moved to the Englewood area in from Bergen, New York in 1979. He was a veteran of the U.S. Marines aboard the U.S.S. Saipan during World War II. He was a retired Supervisor in the HVAC unit at Sarasota Memorial Hospital
He is a member of the Good Shepherd Church of Englewood, Lemon Bay Region Antique Car Club, the Volvo Car Club of America and the Bergen American Legion Post for over 40 years.
He is survived by his wife Carole Peterson of Englewood; his daughter Donna (Robert) Murray of Largo, Florida and 2 grandsons, Jon and Jay.
A memorial service will be held at the Good Shepherd Church in Englewood on Thursday, April 7, at 11:00 a.m.
In lieu of flowers memorial donations may be made to the Racing Dog Retirement Project or the American Cancer Society or a charity of your choice.
Lemon Bay Funeral Home and Cremation Services is in charge of arrangements. You may express your condolences to the family at lemonbayfh.com

Published by Herald Tribune on Apr. 3, 2016.
To plant trees in memory, please visit the Sympathy Store.
MEMORIAL EVENTS
Apr
7
Memorial service
11:00a.m.
Good Shepherd Church
Englewood, FL
Funeral services provided by:
Lemon Bay Funeral & Cremation Services
MAKE A DONATION
Please consider a donation as requested by the family.
MEMORIES & CONDOLENCES
Sponsored by Lemon Bay Funeral & Cremation Services.
1 Entry
Donna, I am sad to hear about your Dad. I have many special memories of you & your Dad while you lived in Bergen. Keeping you and your family in prayer during this difficult time.
Linda Cofran-Liles
April 8, 2016
Showing 1 - 1 of 1 results