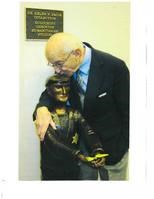 BORN
1922
DIED
2016
FUNERAL HOME
Toale Brothers Funeral Home & Crematory - Colonial Chapel
40 N Orange Ave
Sarasota, FL
Fagin, Sidney
Jan. 30, 1922 - Oct. 27, 2016
Sidney Fagin, 94, passed away peacefully on October 27, 2016 in Sarasota, FL. Beloved husband of 68 years to Helen; wonderful father to Judith and Gary; delightful grandfather to Cora; cherished father-in-law, brother-in-law and uncle; he was admired and treasured by all who knew him.
Born in New Haven, CT in 1922, Sidney attended Samuel J. Tilden High School in Brooklyn and graduated from The City College of New York with a degree in accounting. After serving as a cryptographer in the Army Air Force during World War II, he joined his father's construction business.
Sidney and Helen married in 1948. In 1951, they moved to Miami, FL where Sidney worked as a building contractor, erecting office and apartment buildings, hotels and hospitals, and was actively involved in building Temple Beth Am, of which he was a member.
Sidney was president of Miami's chapter of Recording for the Blind, and provided braille texts for University of Miami's blind students.
Upon retirement, Sidney became a sculptor, producing a number of fine pieces in alabaster, hydrocal, marble, wood and bronze. His nine-foot sculpture, Benediction, graces the courtyard of the Kendall Jewish Community Center in Miami; miniature versions of Benediction are awarded to honorees at the annual "Eight Over Eighty" event at Kobernick House in Sarasota, FL. Also in Sarasota, Sidney's bronze sculpture, Butterfly Boy, stands sentinel at the Fagin Holocaust Collection in New College's Jane Bancroft-Cook Library.
After arriving in Sarasota in 1993, Sidney served as president of the Palm Aire Arts Association and supervised its yearly Art Exhibit. Together with his wife, Helen, he promoted Holocaust education in Sarasota, established the Fagin Holocaust Scholarship for students at New College of Florida, and provided constant support for the Fagin Holocaust, Genocide and Humanitarian Studies Collection at New College's Jane Bancroft-Cook Library.
Funeral services will be held on Sunday, October 30th at 12:30 pm at Toale Brothers Funeral Home, Colonial Chapel, 40 N. Orange Avenue, Sarasota. Interment will follow at Temple Beth Sholom Cemetery.
The family will sit shiva at home on Monday and Tuesday from 2-5 pm.
In lieu of flowers, donations in honor of Sidney can be directed to the Fagin Holocaust Education Endowment Fund of the United States Holocaust Memorial Museum. Checks should be made payable to USHMM with a notation on the check "Fagin Holocaust Education Endowment Fund" and mailed to:
Fagin Holocaust Education Endowment Fund
United States Holocaust Memorial Museum
100 Raoul Wallenberg Place, SW
Washington, D.C. 20024-2126
Attn: Sara Eigenberg

Sidney was a great partner for you and a lovely role model for us all. He will be missed, Leonard & Batbara Wien
November 4, 2016
Rest In Peace Sidney. But
Ruth Wheeler
November 3, 2016
Dear Fagin Family: My sincere condolences on the loss of Sidney ("Mr. Fagin" to me). Sidney was my mentor at the Green Companies when I started my construction career over 35 years ago. Not only was Sidney one of the smartest construction experts I have ever met; but more important, he was a kind, patient and generous man. Thank you Sid. I will never forget you. Vinson
October 31, 2016
My heart felt condolences to Helen and the Fagin Family on the loss of this one great man , Sidney.
May he rest in peace! Gila Goldner Meriwether
October 29, 2016
Showing 1 - 4 of 4 results