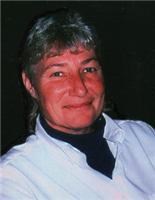 PIONEER - Donna Darlene Haskell, 57, of Camden, Michigan, passed away at her home early Monday morning. She was born on August 14, 1958 in Hillsdale, Michigan to Charles E. and Norma J. (Smith) Haskell. Donna worked for Universal Industrial Products for 36 years in the grinding, inspection and hinge departments.

She was a member of the Bryan Eagles and the Montpelier Moose. Donna enjoyed camping, vacations at the beach, listening to and singing along with old country music and sharing a cold beverage with good friends.

She was preceded in death by her parents, sister, Kimberly Taylor and two brothers, David and Ronald Haskell.

Visitation for Donna will be held on Wednesday, September 30, 2015 from 9-11 a.m. and 12-2 p.m. at The Thompson Funeral Home in Pioneer, 303 First Street. A funeral service will take place on Wednesday at 2 p.m. at the funeral home with Pastor Susie Osburn to officiate. Interment will follow at Waldron Cemetery in Waldron, Michigan. Memorial contributions may be given in Donna's memory to The American Cancer Society or to Great Lakes Hospice. Online condolences may be left at thethompsonfuneralhome.com.
Published by The Hillsdale Daily News on Sep. 29, 2015.
To plant trees in memory, please visit our Sympathy Store.
MEMORIAL EVENTS
Sep
30
Visitation
9:00a.m. - 11:00a.m.
Thompson Funeral Home
303 W 1St St, Pioneer, MI
Sep
30
Visitation
12:00p.m. - 2:00p.m.
Thompson Funeral Home
303 W 1St St, Pioneer, MI
Sep
30
Funeral service
2:00p.m.
Thompson Funeral Home
303 First Street, Pioneer, OH
Sep
30
Interment
Waldron Cemetery
Waldron, MI
Funeral services provided by:
Thompson Funeral Home
MAKE A DONATION
Please consider a donation as requested by the family.
MEMORIES & CONDOLENCES
Sponsored by Thompson Funeral Home.
3 Entries
i miss you and i will always love you!!!!!!
at least you are not sufering any more
October 6, 2015
For Donna
Rae
October 2, 2015
Donna had a heart of gold, her kinship to my sister, my parents, all of my siblings, my nieces, was immeasurable.
She was the "go to" person for so many people when they were in need. Her unconditional love and genuine interest in people was one of her greatest qualities.
She will be missed immensely.
Penny Oswald
September 29, 2015
Showing 1 - 3 of 3 results