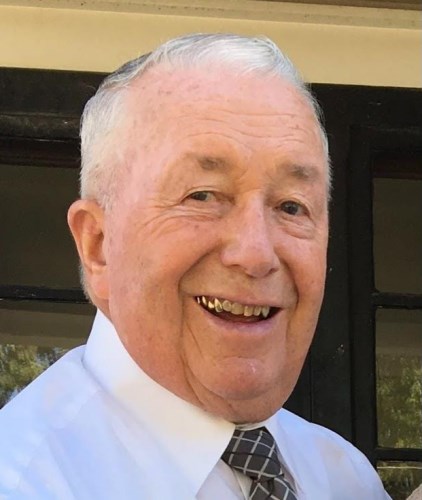 BORN
1938
DIED
2021
FUNERAL HOME
Cache Valley Mortuary
80 West 4200 North
Hyde Park, UT
Leelin Vernon Summers, 83 of Newton, Utah, was born April 2, 1938 in Paradise, Utah, and passed away on September 22, 2021 surrounded by his family. He attended elementary school in Paradise, and graduated from South Cache High School in 1956. Vernon attended basic training for the US Army in Fort Ord, California, and served in the Army Reserves for eight years. Vernon served a full-time mission for The Church of Jesus Christ of Latter-day Saints in the Northern California Mission and later completed a bachelor's and a masters degree in science education from Utah State University. While attending Utah State, Vernon met Verla Ritchie at a dance, and they were later married and sealed in the Logan Temple on Dec. 18, 1962. To this union were born Maree, Shane Ritchie, and Trent Lee. Vernon spent his career as a biology, zoology, and botany teacher at Sky View High School in Smithfield, Utah for 35 years, with one year at Mountain Crest High School for its inaugural year. His friendships and acquaintances gained while teaching were cherished and innumerable. During his teaching career Vernon was involved in the Science and Man's Environment program, was honored as Utah Science Teacher of the year, traveled to Russia to instruct the Russian educators about the Academic Olympiad program, and partnered with Utah State University in developing science curriculum for High School FFA programs. After the passing of Vernon's first wife Verla, he was introduced to Margot D. Beldon. They were married and sealed in the Logan Temple on November 17, 1982. To this union were born Kelli June and Charles (Chuck) Dunham. Vernon wore out his life in service to others. First and foremost he sacrificed to provide for his family. He served many years with the Boys Scouts of America, being honored with the Silver Beaver Award for his years of dedicated service. He was a valiant disciple of Jesus Christ as he served in various church callings, including Home Teacher, Missionary, Young Mens, High Council, Bishop, and most recently as a Patriarch in the Benson Utah Stake. He served in the temple for almost twenty years, with the exception of the eighteen months he and his wife, Margot, served in the South Africa Johannesburg Mission. His testimony of the restored gospel and his Savior Jesus Christ was never questioned. Vernon began his artistic medium in barbed wire while contracting with the South Cache Cattlemen. This led him to a cherished partnership with the Rigby's of Newton as he purchased property on which to build the family home, built miles of fence, ran cattle, and developed his love of the outdoors and horsemanship. He also loved growing a large garden, mowing his lawn, and writing poetry about his many life experiences. Vernon was preceded in death by his parents, Lee and Virginia Summers, his wife Verla Ritchie Summers, son-in-law: Scott Carlson, and son-in-law: Tini Salanoa. Vernon is survived by his wife Margot Beldon Summers, children: Maree Carlson Salanoa, Clarkston, Utah; Shane (Celia) Summers, North Logan, Utah; Trent (Wendy) Summers, Rexburg, Idaho; Kelli (Shaun) Powell, Rexburg, Idaho; Chuck (Shelly) Summers, New Albany, Indiana. Siblings: Crystal (Harvey) Mohr, Providence, Utah; Ramona (Gary) Lemon, Hyrum, Utah; Vaughn (Gwen) Summers, Paradise, Utah; Loyal (Julie) Summers, Roosevelt, Utah; Ed (Annette) Summers, Clarkston, Utah, 17 grandchildren, 3 great-grandchildren and another on the way. A Viewing will be from 6:00 to 8:00pm Wednesday, September 29th, at the Newton Ward Chapel. The Funeral will be the following day, Thursday, September 30th, at 11:00am, with a viewing prior to the funeral from 9:30 to 10:30am. Interment will be at the Newton, Utah Cemetery. Funeral services will be available via Zoom for those not able to attend. Go to www.cvmortuary.com to access the link. The Family would like to offer a special thank you to: Cache Valley Mortuary, Air Idaho Rescue, Encompass Health and Hospice, the doctors and nurses at Intermountain Medical Center, and the numerous prayers of family and friends.
Published by Logan Herald Journal on Sep. 25, 2021.
To plant trees in memory, please visit the Sympathy Store.
MEMORIAL EVENTS
Sep
30
Viewing
9:30a.m. - 10:30a.m.
Newton Ward Chapel
UT
Sep
30
Funeral
11:00a.m.
Newton Ward Chapel
UT
Funeral services provided by:
Cache Valley Mortuary
MAKE A DONATION
MEMORIES & CONDOLENCES
Sponsored by Cache Valley Mortuary.
2 Entries
Oh my goodness! Vernon was a beloved teacher and fellow "Tepee Town" neighbor. He and his family are well known & liked. I have special memories of each of his siblings, my love goes to them.
ChristyAnne Carling
October 5, 2021
I taught at Sky View for 14 years and enjoyed my association with Vernon. He was an excellent science teacher, respected and honored by his students. His quick wit and practical jokes were popular with his students. As a faculty member, he carried more than his share of duties and extra asssignments.
Ed Jenson
September 26, 2021
Showing 1 - 2 of 2 results