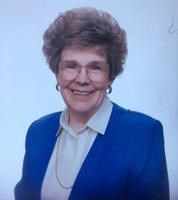 BORN
1922
DIED
2019
FUNERAL HOME
RUSSON BROTHERS FARMINGTON MORTUARY
1941 N. MAIN ST.
Farmington, UT
Martha Kathryn Kirkham Andrews
August 30, 1922 - December 17, 2019
Martha Kathryn Kirkham Andrews passed away on December 17, surrounded by family. She was 97.
Born on August 30, 1922, to Oscar Ammon Kirkham and Ida Murdock Kirkham, she grew up in Salt Lake City and was known as Kay to the many who loved her.
Kay was a naturally creative person and accomplished seamstress who, after graduating from Utah State Agricultural College, moved to New York City in 1944 to work and study millinery, and in her words, search for a husband. At a church event, she met Wade Huff Andrews, who asked her to dinner at the Waldorf Astoria Hotel. The two were instantly enamored, she later said it was as though he had a sign on his forehead that he was the one for her. Wade left to serve in World War II and the two exchanged letters in the nine months that he was overseas. He honored her by naming his B-24 bomber the "Salt Lake Katy."
They were married in the Salt Lake Temple on Dec. 18, 1944. The wedding was officiated by President David O. McKay. Together they lived in Washington, Kansas, Michigan, Ohio, and Colorado, and eventually settled in Logan, Utah, with their five children. Wade taught sociology at Utah State University and Kay worked at the job placement center for four years and advised the women in the Lambda Delta Sigma and Chi Omega sororities. She also served on the Logan Planning and Zoning Commission in the early 1980s.
Service defined her life. Kay held many callings in the Church of Jesus Christ of Latter-day Saints in the Primary, Young Women's organization and in the Relief Society. With Wade, she served in the Leeds, England mission from 1989 to 1990. She was proud of her Church pioneer heritage and served as the President of the Cache County Chapter of the Daughters of the Utah Pioneers, volunteering at the museums in Salt Lake City and Logan. She was an actor and costume creator for many years at the Martin Harris Pageant in Clarkston, Utah.
Kay had a heart full of joy and her advice to all around her was to find happiness. She brought laughter into every room and exceptional wit. She could bring a smile to both a young grandchild and a contemporary with the same story. Her Sunday dinners brought the family together: mashed potatoes with pot roasts and chocolate Texas sheet cake with nuts. She was most happy when surrounded by those she loved and when her family visited, she would wave goodbye until her family was out of sight, letting them know they were loved. Wade stood by her until he died on May 22, 2000.
She is survived by Richard K. and Julie, Gilbert, AZ; Janice K. and Norman Johnson, Layton, UT; Stanford W.K. and Eiko, Centerville, UT; Bradley K. and Susan, Kaysville, UT; and Steven K. and Becky, Bountiful, UT; 15 grandchildren and 37 great-grandchildren.
Services were held Saturday, December 21, 2019, at 11:00 a.m. at Russon Mortuary, 1941, North Main Street, Farmington, Utah, 84025. A viewing was held at 9:30 a.m. prior to the funeral service.
She will be interred in the Logan Cemetery with her husband. She engraved her famous fudge recipe on the headstone that was placed there years ago and the inscription has attracted attention from around the world. We may miss her physical smile, but the smiles she creates with her memory will continue forever.

To plant trees in memory, please visit our Sympathy Store.
Published by Logan Herald Journal on Dec. 21, 2019.
MEMORIAL EVENTS
Dec
21
Viewing
9:30a.m.
, UT
Dec
21
Funeral
11:00a.m.
, UT
Funeral services provided by:
RUSSON BROTHERS FARMINGTON MORTUARY
MAKE A DONATION
MEMORIES & CONDOLENCES
Sponsored by RUSSON BROTHERS FARMINGTON MORTUARY.
1 Entry
My Condolences To The Family;
I'm so sorry for your great loss. May the God of all comfort be with you all during this difficult time.
December 20, 2019
Showing 1 - 1 of 1 results