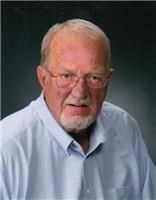 BORN
1937
DIED
2016
FUNERAL HOME
Yntema Funeral Home
251 S State St
Zeeland, MI
Robert "Bob" Vollink, age 79, of Holland, passed away Friday, August 12, 2016 at the American House.
Bob was a charter member of Haven Christian Reformed Church and current member of First Reformed Church of Zeeland. He owned and operated Bob's Barber Shop in Zeeland for 55 years and was a Holland Township Volunteer Firefighter for 30 years. Bob loved hunting, fishing, outdoor sports and especially watching his grandchildren's sporting events.
Bob was preceded in death by his siblings; and in-laws, George & Thelma Vollink, Irene and Arnold Wykstra, John & Jenny Vollink, Gladys & Willis DeWys, Stan Vollink, Ken Mokma, Donna Mokma, and Marcia Mokma.
Bob is survived by his wife of 57 years, Janice; daughters, Victoria and Ronald Janowiak of Holland, Nancy and David Houghtaling of Zeeland; son, Greg and Jodi Vollink of Zeeland; grandchildren, Alex Vollink, Sophie Vollink and Ethan Houghtaling; brothers and sisters-in-law, Lila Vollink of Hudsonville, Robert and Ruth VanderLugt of Florida, Joan and Richard Broersma of Zeeland; numerous nieces and nephews.
Funeral services are planned for 1 p.m. Tuesday, August 16 at First Reformed Church, 148 E Central Ave, Zeeland with Rev. Scott Van Oostendorp officiating. Burial will be in Pilgrim Home Cemetery. Visitation is scheduled for 4-7 p.m. Monday, August 15 at Yntema Funeral Home, 251 S State St., Zeeland. Memorial contributions may be made to Borculo Christian Schools and Zeeland Christian Schools. Condolences may be left online at www.yntemafh.com.
Published by The Holland Sentinel on Aug. 13, 2016.
To plant trees in memory, please visit the Sympathy Store.
MEMORIAL EVENTS
Aug
15
Visitation
4:00p.m. - 7:00p.m.
Yntema Funeral Home
251 S State St, Zeeland, MI
Aug
16
Funeral service
1:00p.m.
First Reformed Church
148 E Central, Zeeland, MI
Aug
16
Burial
Pilgrim Home Cemetery
MI
Funeral services provided by:
Yntema Funeral Home
MAKE A DONATION
MEMORIES & CONDOLENCES
Sponsored by Yntema Funeral Home.
5 Entries
Dear Vollink family, I was looking for information of a family living in the neighbourhood of Grand Rapids. Then I saw that Robert Vollink past away. I feel very sorry for all of you. I know your family because of the fact that Nancy has been at our home during a Blue lake choir trip and during a holliday visit. I have met your parents twice in your hometown. Lovely greetings from fritz bode the Netherlands. [email protected]
Fritz Bode
Family Friend
August 22, 2016
Dear Vollink family, looking on internet for information of a family living in the neighbourhood of Grand Rapids I saw that your father Bob past away. I feel very sorry for all of you. Lovely greeting from Fritz Bode. I visited your parents years ago. Nancy was, a long time ago, in our home in Urk. Fritz Bode; [email protected]
Fritz Bode Bode
Family Friend
August 22, 2016
Vic and Ron:
So sorry about the loss of your Father. Losing a parent is so difficult. Words are not adequate to express the loss of a loved parent. May God give you all strength during this difficult time.
Linda Konicki
Friend
August 18, 2016
Our prayers are with your family Bob. You are in no more pain as you are with the Father . Rest in peace. Florence and Archie.
August 14, 2016
Trust this week will include time for sharing wonderful memories with family and friends. I don't have any childhood memories of family visits to MI that don't include visits to the farm for horse back riding, and tractor rides and climbing in the barn. And Uncle Bob got all of us up on water skis every summer, even if it took multiple tries. There were also those front room family gatherings with the piano and the promise of "going out for ice cream if Sandy will sing". I'm sure I was the least talented singer, but he encouraged us all and rewarded our efforts. Uncle Bob will be missed by all of his extended family, and remembered for his gentle spirit and patience. Love and and prayers to your family. Sandra VanderLugt Haines
Sandra VanderLugt Haines
Family
August 14, 2016
Showing 1 - 5 of 5 results