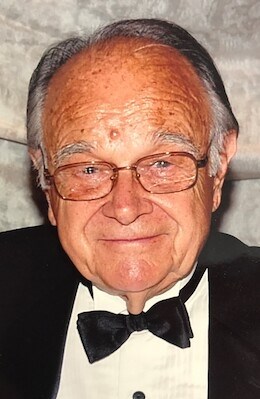 Donald V. Graham Sr. passed away on August 14, 2020 after a long illness and complications from Covid 19. He was the son of the late Teorie V. Graham and the late Elsa Graham (Lehmbeck). His father was a doctor in a World War I aero squadron and was one on the long list of Grahams to serve their country, dating back to the Revolutionary War.

He graduated from Denby High School in 1945. He attended the University of Detroit where he majored in Accounting and met his future wife, Patricia T. Graham (Wall). They were married in August of 1949.

Donald obtained his CPA and went to work for the Internal Revenue Service. He reportedly was the youngest IRS agent hired at the time.

He was a reservist in the Air Force during the Korean War. He later took a position as a financial controller for Blue Cross and Blue Shield of Michigan. Around 1970 he left Blue Cross and became senior vice president of Alexander Hamilton Life Insurance Company in Farmington Hills, Michigan, a position he held for several years before moving on to the senior vice president position for Detroit and Northern Savings and Loan.

In 1981 they moved to Treasure Island, Florida and started "Comprehensive Management", a comprehensive condo management, accounting and real estate firm which Donald continued to manage until his retirement at age 82.

He enjoyed his business, his family, and his wife. He loved numbers and his stock picks were typically better than the professionals. They were members of St. John Vianney Catholic Church in St. Pete Beach, Florida.

Donald and Patricia were married for nearly 70 years until her untimely death July 2019. They had a wonderful and beautiful life together and enjoyed life to its fullest. Their many travels and experiences were the source of seemingly endless stories. They were always together and no one had more fun than they did. Their sweet smiles and laughter and their endless tales will be missed by everyone who knew them.

Donald was preceded in death by his parents Teorie Vance Graham and Elsa Graham (Lehmbeck), his brother Harold Berger, his sister Evelyn Sattler (Berger) and his beloved wife Patricia T. Graham (Wall). He is survived by his three sons: Clifford (Heidi), Donald Vance (Sarah), and Paul (Kathleen) and a total of eight grandchildren: Lindsay, Drew, Paul Jr., Adyson, Muriel, And Owen and a niece, Carol Buckerfield.

A memorial service will be held on September 12, 202 at 11:30 am at St. John Vianney Catholic Church in St. Pete Beach, Florida.


To plant trees in memory, please visit our Sympathy Store.
Published by Observer & Eccentric Newspapers from Sep. 1 to Sep. 6, 2020.
MEMORIAL EVENTS
Sep
12
Memorial service
11:30a.m.
St. John Vianney Catholic Church
, St. Pete Beach, FL
Funeral services provided by:
R Lee Williams & Son Funeral Home & Crematory
MAKE A DONATION
Please consider a donation as requested by the family.
MEMORIES & CONDOLENCES
5 Entries
We are so sorry for your loss, it is never easy to lose someone so dear. Tom and I Lived next door to Paul and Kathleen. We both enjoyed Don and Pat, they did love to share their stories. We have such good memories and laughs of times together. May your many memories stay close to your hearts.
Suz
Friend
September 7, 2020
Offering my deepest sympathy in behalf of the Graham in this time of bereavement. May you find peace in God who brings comfort to all the mourning ones.
Neighbor
September 7, 2020
My deepest sympathy to the Graham Family for the loss of your loved one, Donald, Sr., and pray God gives you comfort, peace and strength.
JW/JKH
September 7, 2020
No one can prepare you for a loss; it comes like a swift wind. However, take comfort in knowing God is with you and your family lean on him in your time of need & remember,
Simone Taylor
September 6, 2020
I was introduced to the family by Don's son, Paul, who was my Allstate partner. I did not keep up with them for some time, and am sorry to have missed the news on Pat. Paul, I hope you and Kathy and the kids are coping OK with your loss. I can sympathize as I lost my Bill in April. I will think of you all next Saturday and add my prayers to yours.
Lil Classen
Friend
September 5, 2020
Showing 1 - 5 of 5 results