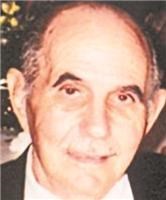 FUNERAL HOME
Samart-Mothe Funeral Home
15510 West Main Street
Cut Off, LA
Earl C. Federine, 87, a native of Larose and resident of Cut Off, passed away Tuesday, March 24, 2015.
Visitation will be from 11 a.m. until funeral time Friday, March 27, at Sacred Heart Catholic Church in Cut Off. A Mass of Christian Burial and celebration of life will be at 1 p.m. Friday at the church, with burial in the church cemetery.
He is survived by his wife of 66 years, Thelma B. Federine; daughter, Rachel F. Pousson and husband, William "Bill" Sr.; grandchildren, William "Billy" Pousson Jr. and wife, Aubrey, Dr. Janie P. Sanders and husband, Dr. Drew Sanders; great-grandchildren, Laura Rabalis, William "Trey" Pousson III, Douglas Sanders and Rose Pousson.
He was preceded in death by his parents, Francis and Stella Federine; and sister, Eloise Woodham.
Samart-Mothe Funeral Home in Cut Off is in charge of arrangements.

Published by Houma Today from Mar. 25 to Mar. 26, 2015.
To plant trees in memory, please visit the Sympathy Store.
MEMORIAL EVENTS
To offer your sympathy during this difficult time, you can now have memorial trees planted in a National Forest in memory of your loved one.
Funeral services provided by:
Samart-Mothe Funeral Home
MAKE A DONATION
MEMORIES & CONDOLENCES
2 Entries
I remember Earl from my days doing electronic and communications service work for Chevron back in the 60s. He was a very fine gentleman. Rest in peace, Mr. Federine.
H. F. Brownlee
March 26, 2015
Sorry for your loss. Mr. Earl was a great decoy carver in our club. He will be missed.
Mike Rhodes
March 25, 2015
Showing 1 - 2 of 2 results